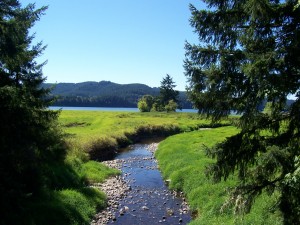 It was one of those end-of-summer days that hint strongly of early fall– clear and warm, with a few scattered clouds. The air seemed soft.  Nothing could really go wrong on an afternoon like this

We drove to Cottage Grove, bikes hanging from the back of the car, and arrived at the Mosby Creek trailhead around 12:30. Being a three-day weekend the parking lot was nearly full, but we expected that. There were many families using the trail, which was good to see. Over the years we’ve seen in-line skaters, bicycles, horses, hikers, runners and even a small horse and buggy on this National Recreation Trail.

I left first while my husband adjusted to the peculiarities of his new bicycle. Now and then I stopped to snap a picture, figuring this 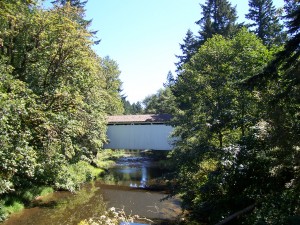 time would also give him more time to catch up once he got started. The trail actually starts in the historic district of Cottage Grove but we usually come to this parking lot, three miles further along. Usually the Bureau of Land Management (BLM) has a host at this site but perhaps the contract goes only until Labor Day weekend. Restrooms are located every few miles along the trail and there is a drinking fountain at this parking area as well.

At Harms Park, near Rat Creek Road, there is a refurbished railroad tressle. This “was one of several locations immortalized on the silver screen. Movies filmed along the railway included ‘Stand By Me’ with River Phoenix, ‘Emperor of the North’ with Ernest Borgnine, and in 1926, ‘The General’, with Buster Keaton.

The first half mile goes through an area shaded by oaks and maples, crosses the highway, and then crosses a stretch of farm land with old apple trees, a pear tree or two and several choke cherry trees, holding clusters of deep red berries. Just before the next road crossing a bridge spans Row River and another covered bridge, this one red, is visible in the distance.

The “Row” in Row River is pronounced like “cow”. In the early 1850s two men were battling over cattle and sheep grazing rights and, during the battle, one man lost his life. Seems like more than a row to me but that’s the story of how it got its name.

From this road crossing to the next is a long gradual climb. Although it does go uphill the grade of the trail is never more than 5%. The climb levels off about half a mile after this third crossing, near the dam that backs up the water forming Dorina Reservoir. The former town of Dorena lies underwater, somewhere near the middle of this 4-mile long lake, which is used for flood control, irrigation and recreation. It was named, in 1899, after two women who lived there, Dora and Rena. I was glad to see  bright green bicycle signs have been placed at all three highway crossings since we were last out here over a year ago. Someone was killed last year at this third crossing.

The Row River Trail is a Rails-to-Trails pathway. In the early 1900s the Row River was used for floating logs to over 20 mills along its banks. With the establishment of the Oregon Pacific & Eastern (OP & E) railroad the logs were then carried by train. The railroad was “owned and operated by the Bohemia Mining Company and used to haul ore, logs, supplies and passengers between Disston and Cottage Grove.” The trail doesn’t go as far as Disston but ends just past the town of Culp Creek, a little village with a school and a grocery store among scattered houses along the river. Disston was a logging/sawmill town near where Bryce Creek and Laying Creek join to form the Row River and was a supply point for miners going into the Bohemia Mining District. The Disston post office closed in 1974. The town was named after the Disston Chain Saws.  Disston Saw Works, located in Philadelphia, was the first manufacturer of handsaws in the United States.

The Eugene District of BLM acquired a number of miles of the abandoned railway in 1993 for settlement of a debt from a timber sale default. In 1998 the trail from Mosby Creek to Culp Creek was completed. In 1994 the City of Cottage Grove acquired the remaining three miles. Adjacent lands belong to private landowners, Weyerhaeuser Timber Company, and the U.S. Army Corps of Engineers, which is responsible for Dorena Lake. BLM and the City of Cottage Grove solicit volunteers for labor and materials in the upkeep of the trail.

We noticed this year that the trail has deteriorated quite a bit since our last visit. There are several places where big bumps have pushed up under the blacktop and a few places where the trail has open splits in it. These have been circled with yellow paint though and there are big warning arrows preceding them. It did make me slow down on my return trip when I usually like to go as fast as possible on that long, downhill grade!

The trail meanders along Dorena Lake for several miles, sometimes under the shade of fir trees, sometimes going through open meadow areas that are scattered with old apple trees and, in the warmth of the afternoon sun, the air was rich with the scent of fermenting apples. We stopped at the fourth highway crossing and ate our lunch before turning back. On previous trips we have gone as far as the end of the trail, past Culp Creek and have stopped to munch blackberries along the way. Sometimes we’ve stopped to get an ice cream bar at the little store in Culp Creek, hoping our slight purchase would help keep the local economy going. Once when I was riding ahead I discovered a cow in the path and gave her the right-of-way and once we listened to a coyote calling from up on an open ridge.

Dorena Reservoir is used for boating of all kinds, motorized and sailboats. Harms Park has a boat ramp. Once we rowed our kayaks here, easy going one way, a head wind coming back. Right now there is a green algae warning against exposure to the water. These warnings are posted in several lakes in the area depending on the time of year. And because the creeks and rivers draining into at least two of the reservoirs come from areas that were mined in the past, there are warnings against eating too many of the fish due to possible mercury contamination. On this day there were a couple of motorized boats and one sailboat, a couple of jet skis, and one boat towing someone on an inner tube. Perhaps those with the inner tube didn’t see the signs. It is a pretty reservoir though, surrounded by forests and grasslands and backed by mountains.

I’ll close with one of my favorite discoveries made when looking into the history of the Row River Trail. “In the early years of the railway a trolley traveled between rail stations along the Row River. A street car appearing vehicle known as the Galloping Goose Trolley was built as an economical means to ferry people and supplies to stations such as Hawley Butte; a nickel from station to station or a dollar to go to the end of the line for a day in the forest.”

Quotations are from BLM websites or the website for the City of Cottage Grove.