A Few Thoughts in a Basket 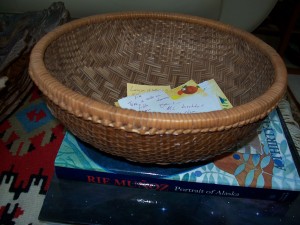 Late in 2012 I remember an online discussion about being thankful for, and taking pleasure in, daily occurrences. Some of us decided to track these events by jotting them down and putting the notes in a jar. I thought about this and decided a jar was not the appropriate container for me. And a paper bag wouldn’t do. It had to be something that was pleasant to look at.

I chose a really nice basket that sits on a shelf in one of our bookcases. The basket is round, about 11 inches across, and has a rim about 1/2 inch wide. It’s tightly woven in two different designs with flattened reeds. The rim is of thicker material and held together by a single reed to which the other rim reeds are tied. Now that I look at it closely I have no idea how all this is put together but it is truly a work of art.

And what of my notes? Well, I started out grandly on January 1st, noting that it was my youngest grandson’s birthday and that I was there for the event although missing his sister’s birthday the next day. (I’d ridden up I-5 on the bus and came home with my husband who had driven up that day for the event. I remember a lot of noise, quite a number of 4-year olds and their siblings, and a room full of balloons.)

January 3: I received a compliment from a woman, about my daughter’s age, saying I had been the first feminist in her life and had, at that time, a bumper sticker on my car (a 1971 Volkswagen van) that she really liked. “A woman’s place is in the House and in the Senate”.

January 4: Took a walk in the fields beyond the subdivision in the afternoon. It was very muddy but I saw many wood ducks in the farthest pond. A warm, sunny day.

January 8: Went on a Wetland Wander (a casual stroll through the West Eugene Wetlands led by someone who works there). I learned three new things and saw a pair of hooded mergansers (a kind of duck). (Any day that I learn something new is a good day. Wow! Three things! Wonder what they were?)

January 9: Started a class in Tai Chi again—fun. (Am still taking this class and have moved up to the more advanced one where I’m usually a step behind but enjoying the challenge).

January 9: Talked, via email, to someone my younger brother’s age, who teaches at Washington State, about growing up in the Castella area and about some of the history there. (This conversation was one in which I learned at least one new thing that I remember.)

January 24: Went to a League of Women Voters lunch program and met a woman from Cottage Grove who is 85 and can still do backflips! (I was really impressed, and probably jealous.)

January 26: Saw grandson, Nick, play his trombone at a performance at the UO where he played with the middle school combo. At 8 a.m.!

January 30: Tai chi today. Started typing my story (a kind of autobiography that I originally typed with Dos. I have the hard copy and am putting it on my current computer.) Played my accordion!! (Hadn’t played for a number of months due to an injury that prevented me from lifting heavy objects. Hence the exclamation marks.)

So January went pretty well but from here on things went downhill so far as remembering to jot notes and toss them into the basket are concerned.

February 5: Beautiful rainbow to the east. On my way to the mailbox I stopped to point it out to grandchildren and their friend who were busy playing. (My theory is that we all need to pay attention to our natural surroundings and one of my jobs as a grandparent is to poke them once in awhile.

February 14: A great day. A dozen yellow roses from my husband (I much prefer them to red). Sunny and almost warm. Went to a League of Women Voters event at the library. Took my exercise walk around the neighborhood. Played my accordion.

And that was all for February. I know it was a short month, but not that short. This doesn’t bode well for March.

March 22: Walked from the garage to Ruth’s. It felt wonderful! (I had some work done on my car at a garage in S. Eugene so walked from there a couple of miles, including about a mile uphill, to our former neighbor’s house and visited. Then walked back to get my car.)

March 23: Saw the moon through a skylight tonight.

Thus ended my project of recording the good things that happen in my life. I must say that the January jottings are probably a good representation of most months though. Reading back over them I thought, “Oh, I remember that.” Not a bad way to be grateful for life’s offerings. Often we are so busy living our lives that we forget to step back and savor the moments.