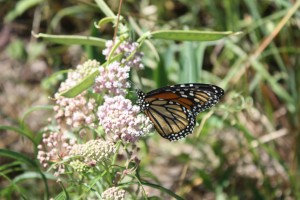 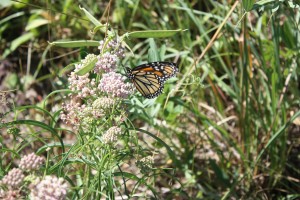 It takes four generations of Monarch Butterflies to complete one yearly cycle. The eggs hatch, the caterpillars eat, caterpillars make a chrysalis and a butterfly emerges. Butterflies mate, lay eggs and the process is repeated. After a 2-6 week life, the butterfly dies (if not first eaten by a predator). But with the 4th generation the butterflies do not die. The caterpillar hatches in September or October and after going through the chrysalis process and becoming a butterfly this generation migrates to California or Mexico. It’s hard to imagine these delicate appearing creatures being able to migrate over 3,000 miles but they do. There they will live for six to eight months and then start the whole process over again. They are the only butterflies that make this journey.

There is some concern about habitat to support the migrations though because the butterflies are usually found resting in particular forested areas of California and Mexico. An organization called Monarch Watch has, since 1992, been tracking Monarch populations at the Monarch Biosphere Reserve, in central Mexico that is a winter resting place for millions of migrating butterflies. Even though it is a protected area, illegal logging has been increasing and millions of butterflies are estimated to have died from cold and wind due to lack of shelter. In the United States, Monarch Watch says that “use of ‘Roundup Ready’ soybeans and corn has reduced monarch habitat by at least 100 million acres since 1996”.

Monarchs are poisonous and their bright colors help to warn predators away. There is even another butterfly that mimics the monarch’s colors and pattern as a means of protection for its species.

When I was a child I often raised Monarch Butterflies. The eggs are laid on milkweed plants, which the larvae (caterpillars) eat. I would take a mason jar, put a couple of inches of dirt in it and cut a twig with leaves from the milkweed plant. Waxed paper held by a rubber band made the top of the “cage” and  it was important to punch small holes in the paper for air circulation. I’d try to have only a few caterpillars because they grow quickly and eat a lot. I’d make sure there were always fresh leaves in the jar and sometimes would put fresh dirt in if the droppings from the caterpillars began to accumulate too much.

Just before it was time to make a chrysalis the caterpillars would stop eating and start dashing about searching for the perfect place to attach the chrysalis. Finally a place would be satisfactory, perhaps a tree twig I’d put in the jar or else the inner edge of the jar, just below the top. The caterpillar would make a silk button, attach itself by the back of its body and hang upside down in a J shape. After some time had passed the skin would split and the body move around until the skin had shrunken and was gathered at the top of the now greenish J. As more time passed the chrysalis turned a beautiful jade-green color and had a row of yellow and black dots across near the top. In about 10 days the exterior of the chrysalis appeared black and then you could see through its actual translucence to observe the orange and black of the wings. This outer covering splits and the butterfly slowly emerges to crawl with crumpled, damp wings up toward the light where it remains until the wings are filled with body fluid, extended, and dry out. There was always a moment of excitement when the butterfly took its first wing strokes and became airborne.

In some parts of the United States there is concern about the survival of this magical creature because of habitat loss. All that the Monarch caterpillars will eat is milkweed and many of the plants have disappeared due to urbanization or farmers and others eliminating them from their fields. I was able to get several milkweed plants at an event a couple of years ago. I gave one away and planted the others and this year my milkweed plants were four feet tall and bore many blossoms. So far I’ve not seen any Monarch Butterflies near where I live but am hopeful. This spring I made a 25-cent donation and now have some milkweed plant seeds that I will plant beyond the subdivision near the peripheral stream that runs through the area, being careful to put them out of reach of plows and mowers.

When we visited Weaverville, California over the 4th of July I was pleased to notice narrow-leafed milkweed along one of the streets where there were no houses and sailing gracefully among them were several Monarch Butterflies. When we visited my brother in the Etna, California area I noticed that he had several plants of the broad-leafed milkweed but didn’t see any butterflies nor were there any caterpillars on his plants. Still, just the fact that the plants were there was a good sign.

So as Mary Oliver says, “Pay Attention. Be astonished.” And plant some milkweed.