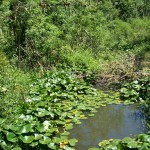 The last time I stood on the footbridge that goes across this pond a little girl, maybe three years old, was calling “I see a tadpole! There’s one over there! I see another tadpole!” in a high-pitched and piercing voice, trying to get the attention of an adult. And I was mentally saying “please dad acknowledge her so she’ll stop hurting my ears.” I’m always happy to see children out enjoying nature. And seeing those tadpoles may have been the most exciting thing that had happened to her in the outdoors up to this point. I realized I needed to go elsewhere for peace and quiet.

But yesterday I was at that pond ALONE! It’s part of a very popular, visitor friendly arboretum (www.mountpisgaharboretum.com) and for solitude one usually has to arrive at any special place early in the morning. It was about 2:30 in the afternoon and I had just finished my 2-hour, volunteer parking-lot-guard stint and was taking a short walk before driving home.

This pond is called the Water Garden and has undergone some changes in the time that I have lived in the area. The original bridge finally became unsafe. It took several years to raise enough money to be able to afford its sturdy replacement and then time to rebuild with the help of staff and volunteers. Many branches fell into the pond during the icy rainstorms of this last winter and they appear to be destined to remain where they’ve fallen. The trees in this area are mostly big- leaf maple, ash and Douglas fir, with a dense undergrowth of ferns, ocean spray, creek dogwood, Douglas spiraea and other shade-loving plants. The yellow flowers of the water lilies are scattered throughout the dark pond like dots of sunshine on a cloudy day. 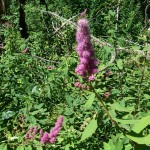 I used to bring my grandchildren over here to look at the western pond turtles and an occasional frog or duck. Turtles would bask in the sun on a log or one of the large lily pads. Sometimes we would just see a head poking up and moving along like a periscope. The pond appears smaller than it used to be, probably because of the fallen branches, and the lily pads grow in dense profusion. Beyond a barrier of branches about 20 feet from the bridge lies an area where the water, at least from the bridge, appears to be less murky and the lily pads relegated just to areas along the edges.

Yesterday there were no turtles that I could see but an abundance of bullfrogs (parents to the previous tadpoles or perhaps the tadpoles themselves as adults). Now and then one would make a sound similar to a wet rubber shoe skidding across a floor as it jumped into the murk. A few called with the typical bullfrog sound, a low croak.

Suddenly I realized something else was swimming about—a muskrat! First one I’ve seen in real life. It had a rounded head, little round ears, fur smoothed back tightly against its body and a very long tail. The creature appeared to be nibbling at something near the surface of the water. I’ve since read they like to eat yellow water lilies. Occasionally the muskrat would dive under a lily pad, bumping up under it, and an indignant frog would voice its displeasure as it leaped into the water. No sooner had the muskrat disappeared than a great blue heron took flight from the far side of the pond, where it had been concealed by brush and fallen trees, and winged straight toward the bridge, just clearing the overhead supports and disappearing toward the river. As I turned back to the pond a movement caught my eye—a large raccoon, making its way rapidly along the pond’s edge was coming my direction, hands working the shallows. My guess is that it had disturbed the heron. I waited for the raccoon to reappear but it didn’t. After a short time the muskrat swam across the cleared space between water lilies and I could see the whole body as well as the tail moving swiftly through the water. I could track its progress as it reached lilies again and worked its way toward the far end of the pond by both ripples and the splashing of frogs.

The great blue heron returned, wings spread, long legs dangling, and lit at the upper part of the pond again. I stayed a few minutes longer and then walked the short distance down the trail. When I got to the trailhead a mother, two small youngsters and a boy about 10 stopped me to ask about a lake. I told them there was no lake.

But then said, “ There is a pond with lots of bullfrogs” at about the same time as his mother spotted the Water Garden sign. Eagerly the boy headed up the trail. His mother said, “You’ve made his day!” And followed.

I thought later maybe I should have told them about what I’d seen but decided it’s best to not overpromise. With any luck the great blue heron flew again while they were there.