Suddenly I heard someone, not a bird, singing softly. What? This was a bird tour and I’d been invited to help two who were more expert than I in guiding a group of people to search for birds on this overcast morning. 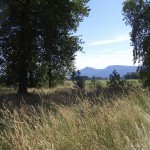 I glanced toward the sound and saw a man about my age singing a portion of a song to another person, a song about a bird. “Hey, I know that song, “ I said. Then I joined him in singing “Tra la la tweedle dee dee dee it gives me a thrill, to wake up in the morning to the mockingbird’s trill……” bringing smiles from some of the rest of the group. That song, written by Vaughn Horton, was popular during the 1950s and I’ve heard it sung by Patti Page, Les Paul/Mary Ford, and Burl Ives among others. Dates me for sure! http://www.lyricsmania.com/mockingbird_hill_lyrics_burl_ives.html.  And I must admit that’s the first time I’ve ever taken part in a bit of songfest on a birding trip.

Today was The McKenzie River Trust’s http://mckenzieriver.org/protected-lands/owned-properties/green-island/  annual Living River Celebration on Green Island, an event to recognize the importance of the on-going restoration process on 1100 acres of property at the confluence of the Willamette and McKenzie Rivers. The area is not open to the public except during this day of celebration.

According to the MRT, the island supports some of the “least altered habitat for fish and wildlife protection and restoration within the Willamette Valley” and their vision “is to restore a robust ecosystem comprised of a rich mosaic of historic habitat types.”

The MRT website states that the property was purchased in 2003 from the Green family, who owned and farmed the land for over 70 years and wanted to see it protected and restored for the benefit of wildlife and the communities of the southern Willamette Valley. During the winter high waters make this an island. During the summer a small bridge gives access.

One good thing about any group of birders is that they range in ability from beginning to quite expert so that multiple eyes are scanning for avian sightings. There were about 15 in our group including a boy who appeared to be seven or eight years old who was very interested and very intent. He carried his father’s camera around his neck and took photos, whether the bird was close or far away.The boy remained involved for the entire 2-hour walk. When he was some distance from us, exploring, his father and I agreed it was good that this was a digital camera, rather than one with film!

We had good views of a bald eagle on its nest next to the river, an osprey tilting above the water, a multitude of tree swallows (some occupying nesting boxes), rough-winged swallows along the riverbank, an osprey nest, lazuli buntings, downy woodpeckers, cedar waxwings acting like flycatchers, a goldfinch, a red-tailed hawk calling and soaring above us, great-blue herons, and more. We also heard orioles, a black-headed grosbeak (and saw a female), a brown creeper, Swainson’s thrush, and the weird sound of one of those great-blue herons.

On the way back to our starting point another hiker and I left the group and walked the half-mile nature trail, which this year has a log across where a tree fell during the winter. It was here that I realized this was the place I’d seen baby spotted skunks playing last year. The trail is diverted slightly away from the den because of the fallen tree but I walked over to look at it closely. There were no spider webs across the opening and the hole looked free of any fallen dirt or debris. I think the skunks may be using the same den again. This year it was impossible to make the entire loop because during the winter the river had cut  another channel and water blocked our passage.

One of the goals of the MRT is to let the rivers do what rivers want to do and then have humans adapt to those natural changes. Some changes are encouraged. For instance the farmland is slowly being converted back to the kinds of riparian or floodplain forests that are common along riverbanks. Over 80,000 native shrubs and trees have been planted on 245 acres since 2006. Levees have been removed so that when a river is high it can flow through portions of the property.

Many other activities were offered besides bird-watching. A kayaking company offered advice and free paddling in a quiet pool area, tree climbing was offered to people of all ages in a couple of cedars, booths were set up to provide information about various environmental topics in the Willamette Valley, and there were food and drink booths. And of course there was music.

It was not a bad way to spend a few hours on a misty morning—sharing stories and interests, searching for birds, learning about habitat restoration, walking among big-leaf maples and cottonwoods, being grateful for an island located at the confluence of one river that flows north to the Columbia and one that flows from east to west to join it. And all this is a confluence of knowledge and support by everyone from the farmers who originally made a living from the island’s rich soils to the organization whose volunteers believe in the importance of rebuilding its integrity. And, yes, the delight of a bit of singing ”tra la la tweedle dee dee dee….” 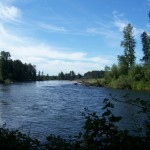