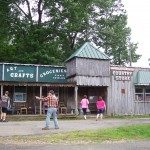 nse with more pine trees appearing as we traveled away from Hochatown. We entered the Quachita National Forest, then Winding Starr National Forest and Kiamichi Wilderness.

And then in mid-morning, when we both were getting really hungry, we realized we’d taken a wrong turn. Tom turned around near a small store, an older place that made you wonder whether you should stop at all because how would THEY know what road you should take and besides that, they had one of those plywood cutouts on the porch, the Mr. and Mrs. Farmer that you stick your head into and have someone take your photo. And it was called The Country Store. But it looked neat and tidy on the outside.

Owners Steve and Suzanne greeted us cheerfully. Steve was a short man, probably 65 plus years old, long white hair beneath a straw hat and shaggy beard. And a talker. The inside of the store was cluttered and the walls festooned with photos and bits of this and that. Steve got on the topic of rattlesnakes when Tom mentioned snakes. He enthusiastically describd a college professor who came to the area having heard the longest rattlesnake found there was four feet. He went up in the rocks across the highway, up on the hill, and they came back with a six-foot snake. “Skinned that one,” said Steve.

Then he launched into a story about someone name Tommy who have been bitten by a water moccasin and refused to go to the doctor. He told us he, himself, has an old stun gun, and he used that to zap the area just above the bite to prevent the venom from moving up Tommy’s arm. He told Tommy’s wife to make him lie down. When he went to Tommy’s to check on him he was up on a table trying to put a rat snake into the attic because he had rats. He wouldn’t lie down because he wanted to put another snake up there. Tommy eventually ended up in the hospital for a few days. Tommy, Steve said, graduated from Cornell and rehabilitated birds and animals. He’d been on the TV program of Wild Kingdom, or was going to be on it.

Steve, who had told us he was a policeman for 20 years, started to tell us which direction we needed to go and where to turn. He spoke rapidly and then interrupted himself and said he’d draw a map. He knew exactly where we needed to go, when to turn, what to look for. But his drawing made it much clearer. He made a mistake on the first attempt and wouldn’t use the back of the paper but insisted we receive a clean sheet with the correct map.

We asked about breakfast, somewhat hesitantly. Steve leaped at the opportunity, took our orders and we were soon eating a delicious bacon, egg and toast breakfast. He asked me exactly how I wanted my eggs cooked, did I want pepper on them while they were cooking, what kind of bread, bacon crisp or not so crisp and it came exactly as I’d ordered. Tom had his scrambled.

Suzanne was much quieter and very knowledgeable about birds. She said she became interested when she was seven years old and had pretty much taught herself and also learned from Audubon publications. The view from the dining area, which held four or five tables, was into a small, green yard with trees and shrubs and several bird feeders. She pointed out the different species that appeared. A little creek ran past the back of the store although it dries up when the rain stops she said. We saw a ruby-throated hummingbird (the only kind they have), indigo bunting, blue jays, cardinals, chickadees, white-breasted nuthatches, titmice, and a red-bellied woodpecker.

When I walked back to use the restroom I thought it might be outside but men’s and women’s restrooms are indoors. The door was, as was the rest of the building, made from unfinished wood that had been around awhile and was a bit fragile. Inside a sign above the chipped, though clean, washbasin said to use the one next to the shower. I went past a small partition and there was another washbasin and a shower. A sign said that showers are one dollar now, no more free showers.

We’d paid for our meal and were about to leave when the door opened and in stepped a tall, slim man with long, dark hair and a large, brightly colored Macaw on his shoulder. He appeared to be in his late 30s or early 40s. “Hi, Tommy,” said Steve. So THIS was Tommy. We were introduced and he left, having given a quick message to Steve. After the door closed Steve suggested we take a tour of Tommy’s zoo. Zoo? We’d seen a sign saying zoo but hadn’t taken it seriously. I assumed it was going to be one of those roadside places with a few cages and some unhappy, pacing animals. Steve asked Tommy whether we could have a quick tour, waiving the small entry fee.

It turned out that Tommy was named the Rex Hancock Wildlife Conservationist of the Year recently by The Nature Conservancy of Arkansas. He has degrees in Ornithology and Wildlife Medicine from Cornell University. He is also a licensed falconer. The Manataka Indian Council has supported Tommy’s Arkansas Native Plant & Wildlife Center for many years.

First we went into the little building, more of a large enclosed shed, at the entrance. There was a TV set there and a stack of CDs. Tommy started playing one of the CDs and it told how he had originally had a place a number of miles away with his “zoo” but vandals had destroyed it. After all his years of hard work and fund-raising. he’d thought that was the end of it but donors came to help him out—doctors, lawyers and others made donations. Some people contributed material for cages or food for the animals. And Tommy started again. Now he has received grants and donations and has been given 78 acres that he will be moving to. He stopped the CD and hurried outside.

The current property is not large, perhaps two-three acres with grass, trees and shrubs sloping gently upward. As he told us about various animals he was also giving directions to several people who volunteer for him. A very intense, active person his eyes were everywhere checking on the well-being of the raptors, skunks, foxes, a mountain lion, an otter, a couple of kestrels and more Macaws.

We watched as Tommy showed one of the men how to feed a fawn that had yet to drink from a bottle. There were three fawns and all had either had their mother’s killed or someone had thought they were abandoned. Tommy caught the fawn and then let the men get a good grip on it and put the bottle in its mouth.

“Snake!” someone shouted and the men dived toward a snake about two feet long and a couple inches in diameter. It was what they called an alligator snake, quite harmless. They dug through some boards and other materials that the snake had crawled into. “Want to see an alligator eat a snake?” Tommy asked us. “Sure,” we said.

We went down to the edge of a murky pond that was about 30 x 20 feet along one side of the zoo. Tommy took the snake and slapped the water with it, calling the alligator at the same time. Then we could see it moving down at one end. Slowly the creature entered the water and swam toward us (we were on a viewing platform, Tommy at the sloping edge of the pond). When the alligator got close Tommy threw the snake in but the alligator ignored it. The giant reptile did inch its way part way up the bank toward Tommy though and he scratched its snout. He said the alligator would get the snake later.

Tommy showed us a smaller alligator with a snout that he had repaired—the snout had been badly damaged. He spoke of operating on some of the animals and had replaced a bone in a deer’s leg. How could he do that here? He took us to another very small building and showed us his operating room, complete with a small padded table, an x-ray machine, and an autoclave for sterilizing instruments.

Oh, and the mountain lion? A friend of his had it as a kitten and gave it to Tommy for safe keeping when he went to Afghanistan. He said if he didn’t come back it was Tommy’s. He didn’t come back.

When we left we made sure to get his address so we can send a contribution. Look him up! http://www.manataka 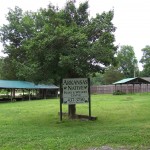 When we left the parking lot, Steve was greeting more visitors. So much for wrong turns. This one turned out to be right.