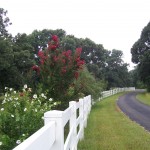 After we left the city park in Quitman, Texas we wandered about looking for a particular county road. When we stopped to ask for directions at a ranch we saw another Casita trailer going the opposite direction and thought oh-oh, we should be going where they were going, which the helpful landowner confirmed. That Casita belong to one of the people who was going to help put on the trailer tongue extension. We headed back and soon arrived at a garage tucked away in the woods. The building had a kitchen and an apartment upstairs with bathroom and shower, and I think could be used if a repair job took a longer time than expected.

After introductions, the men began work. I walked back up the road and took a few pictures and struck up a conversation with a couple who lived across the street. They identified some leaves and nuts for me: a hickory nut, sweet gum and post oak, all new to me. One of the next properties up this rural road had, among other vehicles parked in front, a covered truck with the word “Ladies” painted on it in big red letters. The name of the ranch that was posted above the driveway seemed strange too, although I can’t remember the name of it now.

Eventually all the women got in one car and we drove back to Quitman, supposedly to get lunch for the men. During this ride I asked about the truck and learned that the owner used to run a nightclub. And there was a good story that went with this revelation but I’ll skip that for now as I don’t want to get sued. First we went to a quilt shop, which took some time. Then we went to a Chinese restaurant where we enjoyed a delicious lunch. Then, on the way out of town, we stopped at a Dairy Queen and got food and drink for the men. Sounds mean, but that’s what we did.

We left there at almost 5 p.m. with the trailer tracking much better after the extension had been put on. We were heading toward a park that had been recommended to us. We drove past Big Cypress Creek and past Mt. Vernon, crossing the Red River into Oklahoma. There was running water in this wide riverbed but it was shallow. The banks were red earth. Was this the Red River Valley of song? Wikipedia says there is debate about this as there is a “Red River of the North” in Manitoba, Minnesota, and North Dakota, as well as this “Red River of the South” going through Louisiana, Arkansas, Texas and Oklahoma. More signs along the way: Choctaw Nation, Kiamachi Technology Center, Tyson, Broken Bow Gravity System, Steaks and Catfish.

We reached Beaver Bend State Park at 9:45 p.m. and of course it was full—which we discover

ed after driving down a long, winding, 2-lane road. There were little children all over the place. We had stopped at an Arby’s in Broken Bow to get sandwiches (which we’d eaten), a salad and iced to go. It was dark by now but we finally found the last space, #5, in a crowded RV park, on the main highway, right next to a toolshed-sized restroom/shower combination, the only one for the whole facility. The store/office had tacky souvenirs on the walls and shelves and cowboy/cowgirl signs on its restrooms. But we were off the highway.

The family camped next to us had five children, and I mean they were RIGHT next to us. Nice people though. They had one of those Coleman type tent-trailers. The dad said he had called Beaver Bend at 8 a.m. and they were already full. He and his brother run a pizza place not much bigger than our trailer, he said. 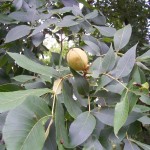 This area used to have a small village that is now under Beaver Bend Reservoir but the history is interesting, including the fact that it was once a thriving moonshine center. http://www.ghosttowns.com/states/ok/hochatown.html

It was overcast and a bit muggy the next morning (Sunday) and there appeared to be no place to eat here in Hochatown so we continued our journey, looking for a place to eat breakfast.