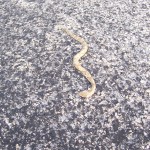 a microwave in a trailer. Sure cuts down on dishes and when the temperatures are high keeps things cooler. We had instant cereal this morning via the microwave. After driving on a roller coaster of a highway for awhile we accessed a greenbelt that we thought was going to take us along a very large reservoir and it did but offered only a couple of views of the lake. We drove and drove and drove. There were pretty views but almost none of the water. I hadn’t realized that Missouri had so much hilly country. We nearly rear-ended a car that suddenly stopped for a left turn. Whew! That was a great test of our trailer brakes.

I got our GPS (Hope) going since we were about to enter Branson and of course Hope failed us again so we relied on calling Tom’s cousin “hoping” she could guide us. That’s not an easy job when you are in your house searching for a map while trying to guide visitors who have no idea where anything is. We did finally get there though. She and her husband live on the outskirts of Branson on 2 ½ acres with plenty of room for us to park.

That evening they took us into Branson for dinner at a Mexican restaurant—Cantina Laredo—that overlooks Taneycoma Lake, although the lake looks like a big river. This part of Branson has a foot-traffic-only mall with the street looking as if it is cobblestoned. A very small train runs up and down the mall to carry those who want or need to ride from one place to another. Below the restaurant, toward the lake, are water fountains that shoot up at intervals. On the hour there’s a light/flame display and we watched a large tour boat that looked like a yacht come up and turn so the passengers could watch. This whole area is a fairly recent development called Branson Landing.

Taneycoma Lake is on the White River. When it was first built it was a warm-water lake but when the Table Rock Dam was built water coming through the generators was colder. Now such coldwater fish as rainbow trout may be caught in Taneycoma Lake. It’s warmer when no power is being generated but when it’s generating the water becomes very cold and has a swift current, like a river.

We had noticed tilted layers of rock along many of the canyons in this part of Missouri. From what I’ve researched, the Ozark area has had repeated episodes of being under oceans and having millions of years of sea creatures’ shells deposited, then being uplifted and eroded. Most of the Ozark mountains were once ocean floor. River channels have cut through the rock and, in addition, limestone caves have formed from subsurface water.

It was warm and humid here just as it had been for most of our trip. The first morning I arose about 5:30 and walked a mile up the road. When I’d mentioned the night before that I might take a walk in the early hours while it was cool I was told to watch out for snakes on the pavement. Hmmmm. OK, I will do that. The sun was just beginning to glow on the hills in the distance when I started. There were no cars at all.  I saw and heard a couple of crows as I walked and a turkey vulture perched on a telephone pole with its wings spread out, looking like the top of a totem pole, but it flew as I got closer.

On my way back I saw a cardinal, a flash of red crossing the road and flitting about in a pine tree, as well as a cottontail rabbit that disappeared into shrubs. Then I saw a small snake, about eight or nine inches long, that had been run over. I took a good look at it, not wanting to 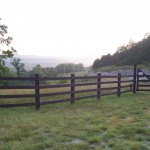 get too close until I was reasonably sure it was dead, and snapped a photo that didn’t turn out very well but was enough for identifying. I was sure it was a copperhead, which I was able to confirm back at the house with Department of Agriculture pamphlets. They also have water moccasins, rattlesnakes, fleas, ticks, scorpions, and more. Oh, and armadillos, originally from South America, that have migrated north from Texas. Armadillos can carry leprosy and people can get leprosy from them. Barbara keeps guinea hens to eat the ticks, although she said turkey vultures got a couple of the hens. Needless to say, it’s potentially hazardous to work in your yard here. 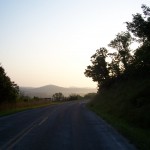 The second night we ate an early dinner at the College of the Ozarks, a Presbyterian school, which bears the sub-title of “Hard Work U” on its entry sign. This was an interesting evening. The dining room looked like a lodge with big beams and treetrunk-shaped supports. The view out the windows was of green grass and trees. The meals were delicious and our waiter attentive as well as willing to talk about what he hoped to do with his life. All the full- time students who go to the College of the Ozarks must work 20 hours per week. The college has its own water supply and produces its own electricity, raises cattle, grows gardens, etc. all involving student work. All the cooking is done by students. Most try to work with something they hope to be able to use when they graduate. I had trout with crawfish etoufee, a salad and iced tea. We had homemade ice cream for dessert. No alcohol is served.

The next day we were once again on the road. As we passed the Joplin, Missouri exit the sky grew very, very, dark. A strong wind came in great gusts and the rain poured down. Our trailer was buffeted about a bit and we hoped we weren’t getting into a tornado.