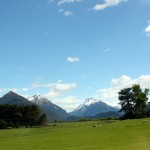 After leaving Arrowtown and going through Queenstown we drove along Lake Wakatipu, a finger lake formed 15,000 years ago by retreating glaciers. The lake is very narrow, long (84 km-52 miles), and deep (339 meters—1,112 feet) with mountains rising straight up from its edges. So dramatically lovely. We stopped several times along the highway to take photos. Maori legends say the lake was a giant, Matau, who burned to death in his sleep after abducting the daughter of a chief. The heat from the flames burned a hole in the rocks and melted ice and snow, which filled the lake. The level of the lake fluctuates five inches every 25 minutes and the legend says that the heart of the giant, which can never be destroyed is the small island (Hidden Island) and still beating. Scientists say the fluctuations are caused by atmospheric conditions. 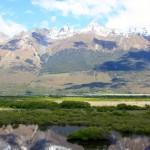 Queenstown has been running a paddlewheel ship, “The Lady of the Lake”, on Wakapitu since 1912 although we didn’t see it.

Not far past the little town of Glenorchy, at the north end of Lake Wakatipu, we entered Mt. Aspiring National Park. We parked in a small parking lot which was equipped with an outhouse and one faucet and surrounded on  three sides by meadows that were being planted with small trees. Some treks in this large park can take days. I would love to be able to backpack into the interior. Along some trails it’s possible to stay in huts. http://www.newzealand.com/us/feature/routeburn-track/ This link shows examples of the kinds of hikes one can make in Mt. Aspiring National Park. In researching this I noticed that some huts shown on a trail (trek) map show up to 50 bunks (!) although most are much smaller. 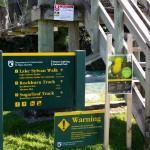 Our pathway was across a swaying suspension bridge over the small Dart River and into a red beech forest. This beech is native to New Zealand. In years when the trees produce bumper crops of seeds, rat and mouse populations explode. This, in turn, creates a large population of stoats, which prey upon the rodents. When the rodent population drops after this population burst then the stoats prey on native birds and their eggs, including the kiwi, as well as upon bats and snails. Stoats are invasive members of the weasel family and were originally i 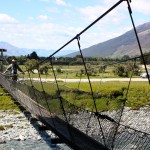 ntroduced to control rabbits and hares.

The beech forest was heavily shaded and the moss-covered ground saturated from recent rains. We edged along large puddles while constantly searching the trees for birds. Some of us were also intrigued by ferns and other plants on the forest floor. In some places there were holes in trees that would be great for cavity nesting birds but predators have greatly reduced 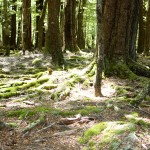 the populations of these species. We did see several of the Australian robins (which are black and white) and a yellow hammer.

Time was running out on us so we turned back. Derek, minus his usual red knit cap or broad-brimmed Australian type hat, was in the lead 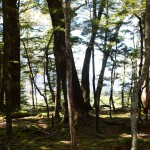 . Suddenly the rest of us saw a large bird swoop down and fly just above his head, disappearing into the trees on the other side. Derek, who hadn’t seen it coming, turned and told us we should look out, he’d just been attacked. We laughed. After crossing the bridge into the sunlit parking lot we realized that yes, indeed, he had been attacked. The New Zealand Falcon had drawn blood, going through his head of thick curly hair to the scalp. It must have had a 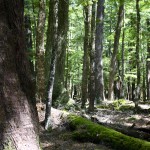 nest nearby. Taryn got out the first aide kit, put antiseptic on the wound and we were soon on our way again.

New Zealand has just two hawk species, the harrier and this falcon. We were all thrilled, of course, to have our introduction to the falcon be so dramatic. I’m not sure Derek was quite so enthusiastic. 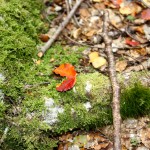