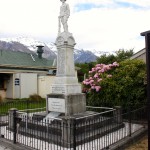 After visiting the beech tree forest in Mt. Aspiring National Park and witnessing the falcon attack, we headed back to the small town of Glenorchy where we stopped at a little cafe and  ordered sandwiches to go.  The place was fairly busy and our sudden lunch order no doubt threw them a bit off schedule. While we were waiting, some of us wandered about outside and looked at a monument that listed the names of all from that village who had died in WW I and included an additional plaque listing those who had perished in WW II. There was a rhododendron blooming next to it. It was almost two o’clock big the time we were eating. My sandwich was huge and I couldn’t finish it. Then we went back through Queenstown and took a road toward “Remarkable Ski Area”.

I thought this meant it was a remarkable place to ski but have since discovered it’s the name of a mountain range, The Remarkables. “The mountains were named The Remarkables by Alexander Garview in 1857-58, allegedly because they are one of only two mountain ranges in the world which run directly north and south. An alternate explanation for the name given by locals is that early Queenstown settlers, upon seeing the mountain range during sunset one evening, named them The Remarkables to describe the sight.” (Wikipedia) 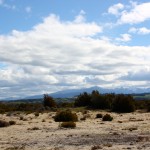 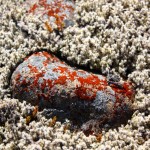 We saw a number of deer ranches along the way although, despite the varied scenery, nearly everyone slept for a while. We stopped briefly at a Wilderness Scientific Reserve, a rather desolate looking, undeveloped place where there were very small primitive pine trees, part of the original foliage from eons ago. The trees don’t have cones, just nubby berry-like things more like a juniper. The branchlets are covered with scale-like leaves. These are called Bog Pines but grow in extreme environments from this well-drained, rocky soil to
wet bogs, from near sea level on the South Island to montane and subalpine. The ground cover here was a gray-green moss, called wooly moss. An information board mentioned a
wild fuchsia growing here that is fed upon by the caterpillars of a daylight moth. The moth pollinates the fuchsia blossoms.

I asked Derek about the tall bunches of grass that danced gracefully in the wind on the hillsides and flats in this area. He sai 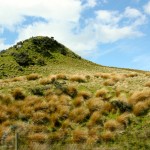 d they were red tussock grass. Sheep don’t like this when it’s large so non-native grasses have been planted throughout New Zealand for the benefit of the sheep. But they are trying to create a preserve where the grass, which gets two-to-three feet high, can grow naturally. We later saw a motel in a town that was called the Red Tussock Motel and was painted almost the same color. 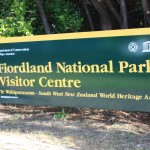 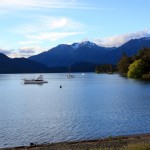 Then we headed toward Te Anau and Milford Sound. We stopped that night at the Kingsgate Hotel right next to Te Anau Lake. The lake’s name was originally Te-Anau-au, Maroi for “The Cave of Swirling Water.” Three large fiords form arms to the lake, the only inland fiords in New Zealand. Several rivers flow into it and one, the Waiau, flows out. Most of the lake is within Fiordland National Park. One point of interest here that we didn’t see was the G 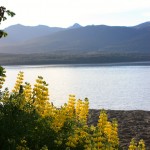 lowworm Caves, which are accessed by taking a boat across the lake. These limestone caves have waterfalls and rivers and one area has cave walls covered with glowworms. Several hiking tracks begin here at the lake.

Dinner that night was very good. There weren’t many people eating at six so it was pretty quiet. I had lamb, potatoes, green beans, applesauce, salad, beer and dessert. We had our own reserved table and served ourselves, cafeteria style.

After dinner Tom and I walked along the lake on a paved path. I took photos and we looked at birds. Derek came by in time to point out a Dunnock or Hedge Sparrow we’d been trying to spot. And of 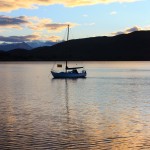 course there were Tui, which we saw frequently on our trip. They’re about the size of our robin, dark with white throat puffs, and have a variety of songs. A small float plane rested on the lake and a couple of sailboats. During dinner we had seen five or six little sailboats from our table, a couple of them having red or blue sails. There was a beautiful sunset and it was hard to stop taking pictures.

The next day we were scheduled to eat breakfast at 6:00 and leave for Milford Sound at 7:00.