After lunch at the Wild Walnut Café we left the town of Lawrence, crossed a big river, and began driving through miles of farmland. There were fruit trees and fruit stands (New Zealanders call them fruit stalls): pears, apples, apricots –Derek said this area is known for its apricots. There were some cherry orchards and grape vines. In one area there was netting ov 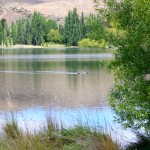 er large sections of cherry orchards to keep the birds away. They get their cherries in time for Christmas!

We stopped at some ponds that were created by gravel extraction where we saw a pair of Great Crested Grebes and I spotted a skink on one of the many large granite outcroppings. “Skink! Skink! Skink!” I called but by the time anyone else came to look it had disappeared. This slender lizard was almost the color the rocks except for some blue along its sides. It was a rather barren landscape here, so much so that, when we weren’t looking at the grebes, we were taking photos of a variety of lichens on the rocks. Tom saw some fish jumping in one of the ponds. And the ground was covered with rabbit pellets making one think the rabbits might do a lot of dancing on a moonlit night. My discovery of a rabbit skull created absolutely no excitement within our group. 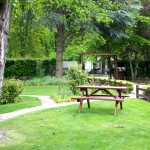 Around 3:30 we stopped at a fruit “stall” for ice cream with fresh berries, Tom and I choosing to use bowls while the others munched on cones, a delightful treat on this warm, sunny day.

We passed Fairview Orchard and Slaughterhouse Creek, and came to the town of Alexandra along the Clutha River where numerous bicycles zipped about. Then we passed Gibbston, Valley of Vines and the Peregrine Winery and finally arrived at Arrowtown, a historic tree-filled village with Gold Rush architecture where we stayed at the Shades of Arrowtown, located near the Arrow River. Our room here was large with a king bed in one room and twin beds in another where there was also a stove, sink and refrigerator.

After checking into the motel we were told we had some time to just explore this little town, so we scattered 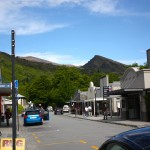 and then some regrouped, walking along the river where families played at the edge of the stream. Mountains rose on all sides and it was a pleasant stroll under the trees with the sound of the river and the smell of riparian vegetation. The mountains here are browner and more rugged, more as I have always pictured New Zealand. 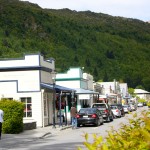 They were a little like the Trinity area but without the trees.

Before joining others at the river I had wandered into a wool shop that had beautiful, though expensive, items 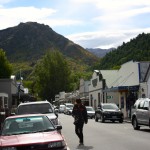 ranging from boots to bedcovers. It was cozy and a little dark. I snapped a picture of some boots and then meandered over to the stack of thick, ultra-soft, white bed covers. Suddenly the proprietor appeared from the back of the store and said, “Don’t take that picture! Put the lens cap on!”

Startled, I did so but asked why. He said that most stores do not allow photos to be taken. And he asked whether I’d taken 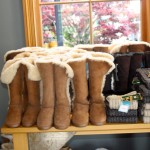 one. Since I knew he meant of the covers I told him no. I could understand this if it were an art gallery, but a woolen store? So I left. This was the only time during our trip that I was treated rudely (my notes say “kind of a jerk”). New Zealand impressed us with the courtesy and helpfulness of nearly everyone we encountered. When I mentioned this incident to a businessman in Auckland he wait that was a bad thing for the wool store owner to have done because it gave a bad impression of the town and of the country. So I’m really glad I have the picture of the boots! The next day Taryn went down to that store, although I didn’t know until she told me. The man wasn’t there but she had a bit of a “discussion” with a woman who worked there. 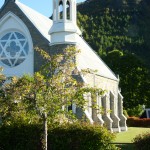 We ate pizza for dinner, sitting outside. I had wine with mine and Tom had beer. Then we walked back to our room and watched a program that Taryn had recommend that was about the Kaikoura area where we had gone to see whales. And we watched some news. This was one of only two times we watched television on our trip.

The next morning we had breakfast at the New Orleans Hotel, which was built in 1866. The dining room makes use of lots of wood and has a long wooden bar for evening use. I ordered eggs Benedict with smoked salmon. So good! We could see outside through a sliding glass door into a little courtyard that contained the figure of a man panning for gold and where a de 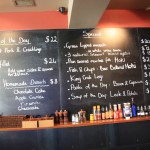 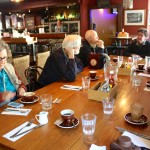 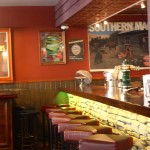 Gold was discovered in this area in 1862 and at one time the population, now around
3,000, reached 7,000 people. There are covenants about the buildings, which must meet historic-district standards. During the winter Arrowtown is popular with snow enthusiasts, having four ski areas within an hour’s drive. It is also where some of the filming for Lord of the Rings took place. The Ford of Bruinen was upstream from Arrowtown and, according to a Queenstown website, Frodo was carried across the river with the Black Riders following closely.

After breakfast we drove through Queenstown, about 20 minutes away. What a beautiful area! Steep mountains with snow, paragliding with colored chutes, turquoise water. Very touristy with lots of condos and all kinds of sports advertised but nonetheless a feast for the eyes.

Candy shops, a hat shop, and even a jade shop can be found in Arrowtown 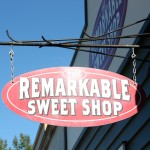 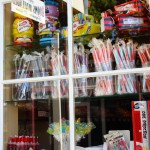 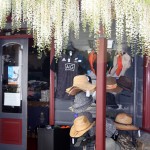