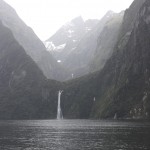 Milford Sound is actually a fiord, formed from glacial action, rather than a sound, which is wider and more like a bay. Sounds are often formed by seas filling river valleys. The 14-mile Sound (fiord) is named after Milford Haven in Wales.

The photos we see of Milford Sound show tall, sunlit cliffs extending into the sky, reflections on glass-smooth water, and smiling tourists with cameras. The reality of the Sound is that the mean annual rainfall here is 268 inches 182 days of the year and it’s considered one of 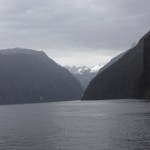 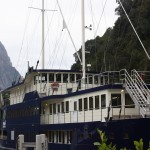 at the excited tourists with cameras—us—can also be taking photos of a much more mystical nature although no less beautiful.

We went out on a fairly large ship—dark blue, with several masts and no sails. The captain gave a pretty good educational narrative on an “as needed” basis as we went along. There were people of all natio 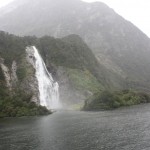 nalities on board and a few couples who were very smoochy, honeymooners maybe. Rain, wind and spray from waterfalls doesn’t strike romance to most of our hearts I think so that was my explanation for their closeness. That and perhaps a desire to stay warm and maybe let the other person block the spray! I stayed out on the upper deck nearly the entire time, going inside for about 10 minutes toward the end as I was getting wet and cold and really craved a cup of hot tea. Tom was already there. Once I’d warmed up for a few minutes I went back out but stayed under an overhang on the deck where it wasn’t so wet.

Milford Sound is almost impossible to describe. It’s so big, like the Grand Canyon of fiords. One waterfall of 800 meters, for instance, seemed much shorter because of the height of the rock around it. Some of these sheer cliffs rise well over 4,000 feet above the water and extend far below. Tannic acid from the trees stains the top layer of water, and plants and 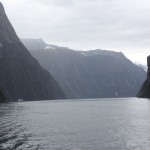 animals normally found at greater depths may be near the surface. The soil, where it exis 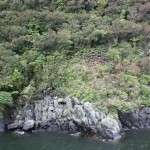 ts, is very thin and only 20% of the trees are actually in soil. If a solid tree loosens it can take down a whole batch with their intertwined roots—almost like an avalanche, leaving a bare, rock slope. It can take hundreds of years before the patch of forest is re-established. We could see several places with a cluster of trees at the bottom of a long, barren slope. The predominate tree is beech.

There were a couple of blue penguins visible on the return trip but I didn’t see them. I did see some crested penguins on the way out and a few young fur seals as well as numerous gulls. Waterfalls form quickly here with rain and disappear quickly after rains stop. There are five or six permanent waterfalls. The others come and go. The captain pulled in very close to one waterfall on the outward trip. He showed us one that follows a fault line clear up to the top of the cliff and said it changed after the last earthquake. He also pointed out differences in height of the surrounding cliffs showing where previous valley floors matched each other across the fiord.

We went out of the Sound and into the Tasman Sea just a short distance. Here swells were much big 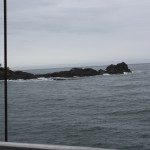 ger and there was more wind. I was glad I’d taken anti-nausea pills that morning! Wonderful to be on the top deck with wind carrying the rain into your face as you balance with the swells. Over to the left, before we turned around, we could see a lighthouse well above sea level that we were told has had waves hitting it during big storms.

Going back toward the docks the captain brought the ship in very close to another waterfall and drenched people on the left side of the boat. It was so dramatic that I 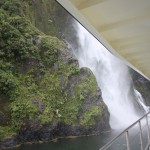 was torn between trying to keep my camera dry and snapping just one more photo. We were out about two hours.

It’s difficult to describe the experience although I found the trip almost mystical, the low clouds, towering cliffs and ribbons of cascading white water lending an air of unreality. It was travel in black and white and varying shades of gray. Sunshine, still water and reflections would have been beautiful but this was not a Disneyland trip. It was Milford Sound and one could imagine what the scene might be like in winter.

When we got back to the dock we stopped for lunch. There were some young people asleep in a lobby area who looked as if they might have been backpackers who’d gotten drenched. 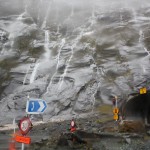 y back down the highway we stopped at the Gorge parking lot (where the Kea were) and some of us walked in the pouring rain to a place where water has ground huge potholes by swirling boulders against the rocks—it was very loud with the sound of the rushing stream. I got soaked despite my rain gear. Later, when we got to the other side of the tunnel, some, including Tom,  went looking for rock wrens in the rain. Taryn, Genny and I stayed in the van. They were gone at least 20 minutes. Taryn fed two more keas bits of apple. They didn’t find any wrens on their excursion. Note the patches of snow and waterfalls next to the tunnel.

We went back to the motel, dried off some clothes and other gear and put clothes in the washing machine before going to dinner at six. Great to be warm and dry, filled with the day’s memories and a delicious meal!