The right wing of the small airplane pointed nearly straight down toward the wet, green trees. All t 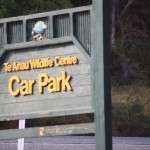 hat existed in that brief moment of potential death was the wing of the plane—in brilliant detail–and a foot or so below the tip of the wing, the intense greenness of the trees. Not my whole life flashing before my eyes, not the plane, not my fellow passengers, not the buffeting wind or the rain, just the sharply outlined wing and the trees, like a still shot inserted into the middle of a movie.

Just as suddenly as the plane had tipped, the pilot righted it and a moment later we landed at the airport to the sound of our relieved applause. Such was our introduction to Stewart Island.

The day had started out calmly. We left our motel at Te Anau and went to a conservation area where 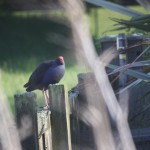 we saw a male merganser on a lake and a blue duck in an enclosure. Other birds that could be seen here included the Morepork Owl, a bit difficult to see in its shelter but nice to see an example of the only surviving owl species in New Zealand. It is also sometimes called the Tasmanian spotted owl. This small owl eats insects, small rodents and birds and hunts in the forests. Apparently barn owls have migrated to New Zealand from Australia but they are not a forest hunter. The name Morepork comes from the sound of its call.

From there we traveled along the edge of Lake Manapouri, a very large lake with beaches and islands, that was the focus of a major environmental dispute a few years ago. The government was going to raise the level of the dam considerably. People protested and a low dam was put in instead. This protest is known as the Manapouri Dispute and now there is a group called Guardians of Manapouri to watch over the care of this lake. Most of New Zealand’s electricity is from hydropower.

We ate lunch in the little town of Riverton, along the Jacobs River Estuary, where I had vegetable soup and garlic bread and Tom a sandwich. The town was established as a fishing village and has a small harbor, although farming is becoming more important. Dolphins can sometimes be seen feeding in the estuary. We passed through the town of Tuatapere, which was established as a lumbering town and still has one small mill. Tuatapere, located near the Waiau River, was quite close to the epicenter of the 2009 7.8 earthquake but suffered little damage.

A stop at the Invercavgill Museum enabled us to see the tuataras, ancient lizards that are being han 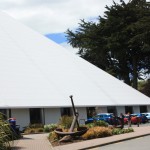 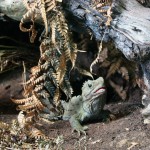 d-raised in outdoor enclosures. “They were once found all over New Zealand but now are found only on 32 offshore islands. They are the only surviving members of the order Sphenodontia, which was well represented by many species during the age of the dinosaurs, some 200 million years ago. All species except for the tuatara declined and eventually became extinct about 60 million years ago.” (Department of Conservation online publication). The creatures are successfully breeding and one (Henry) is believed to be 100 years old. Other exhibits here include Maori culture, birds, and an art gallery.

We learned that it was too windy for the planned Kiwi sighting trip that was expected on Stewart Island that night. The flightless Kiwi forage on the beaches after dark. We also learned that it was too windy for the ferry to take us to Stewart Island so had to do a last minute change of plans. We rushed back down the highway from the ferry terminal to the airport in Invercavgill and dashed inside with all of our luggage. There we hurriedly sorted out essentials for two days and left the bulk of our belongings in airport security. We could take one small bag and a small backpack each. An eight-passenger, two-engine (propellers) plane was waiting for us and we ran outside to climb in. Taryn rode in the co-pilot’s seat. Tom and I squeezed into the very back two seats with Shane and Derek in front of us. The others sat between them and the pilot.

There was a lovely view across the land and the white-capped ocean as we gained altitude. It was a little bumpy but not bad until that wind-shear stopped our hearts as we were descending to the Stewart Island airport. We were all smiling and talking and very wired afterwards. The pilot rushed off to bring one more load of passengers before weather conditions worsened.

A small van from the Bay Motel in Oban took us from the airport. Oban, with a population of 400, is the only settlem 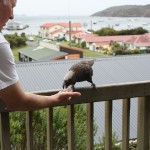 ent on Stewart Island (the third largest island in New Zealand) and is a fishing village. Our room had a wonderful view of Halfmoon Bay and there was a long balcony running clear across the front units.

y we realized we were being watched. Kakas! These large parrots, closely related to the Kea, but more arboreal, were looking in our window and asking to be fed. You are not supposed to feed them but it’s hard to resist, particularly for people like us who wanted pictures. Tom got some nuts out and when we looked down the balcony we could see Shane and Genny also feeding them and taking pictures. At one time five of these birds were jockeying for a good spot. Eventually we had to close the curtains so they would think no one was home. They have a spoon shaped, bristly edged tongue useful for lapping up honeydew or nectar from flowers of flax and rata. They also remove strips of bark to get sap. Kakas are primarily a cavity nesting bird and vulnerable to predation by possums and stoats. Attempts are being made to control these predators in the Halfmoon Bay area through use of fences. The Kaka’s name can also be pronounced as “kaykay” rather than “kahkah”. 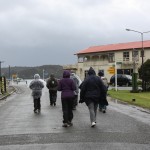 hotos, had some hot tea, and then it was time to walk to dinner.