Raining! So nice yesterday but a different story when we got up this morning. First overcas 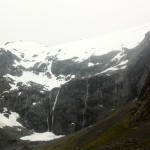 t, then raining off and on and then RAINING. Milford Sound day.

I had rain pants in my daypack but didn’t put them on. Should have. But I was mostly warm on top: shirt, vest, fleece jacket, rain jacket and hat. The road we took to Milford Sound had been closed by snow two weeks ago.

We went through Eglinton Valley, a glacial valley associated with stories of farmers and ranchers coming to the area in the late 1800s and crossing the river 16 times to get there. It is a long, green valley rimmed with jagged, snowy peaks, some over 6,000 feet in elevation. I tried taking pictures through the windows, hoping a few would show the drama of the terrain and the waterfalls cascading down the cliffs. State Highway 94 parallels much of th 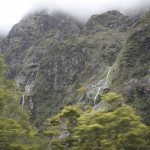 e Eglinton River, which runs into Lake Te Anau on the east side. This is one of the few valleys in Fiordland National Park with road access. The forests are mostly beech.

2014 saw a heavy production of beech tree seeds and a subsequent rise in populations of possums, stoats and rats. So the Department of Conservation used aerial dispersal of the poison bait 1080 as well as setting traps to help protect the kaka (bird), the short-tailed bats, mohua and other forest birds from these predators.

Before reaching Homer Tunnel we pulled off and took a short walk along a boardwalk beneath the trees to Mirror Lake, a very small lake with amazingly clear reflections. 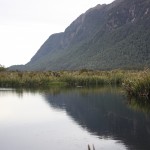 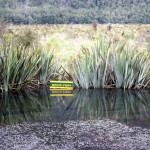 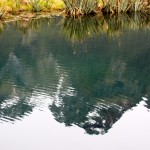 Homer Tunnel is very long (1.2 kl –3/4 mile) and was built by hand during the Depression, beginning in 1935, by men with wheelbarrows and shovels. Because of safety issues within the tunnel and avalanches in the area, plus delays due to WWII, it wasn’t opened until 1954. Traffic is one-way with a traffic light and minutes to be waited posted. Patches of snow were still around the tunnel. In 2012 a proposal for a 7-mile, two-lane tunnel directly from Queenstown to Milford Sound through parklands aroused defenders of the parks and was rejected in 2013 as being environmentally unsound and destructive. 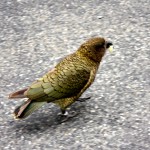 s and some cars were parked and people were takin 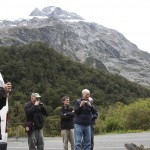 g pictures of Keas, very large mountain parrots. Two, quite tame, were eating bread or fruit. They call “kea” when flying from one valley to another. This is the only true alpine parrot in the world and is native only to the South Island. They are a highly intelligent, very social and adaptable creature. Keas are omnivorous and have, at times, been seen slitting 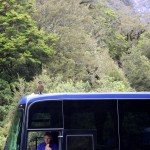 open the backs of sheep and eating the sheep’s fat. The birds nest on the ground in burrows among tree roots. For many years there was a bounty on them because of the sheep attacks but populations plummeted and today they are a protected species, although killings of the birds still occur. 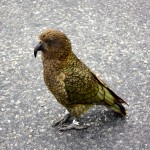 Derek said he was camping one time without a tent and woke up to one Kea nibbling on his earlobe and another nibbling on his boots. These are the parrots that will destroy windshield wipers and other rubber things, much to the annoyance of the vehicle owners.