This seemed to have been a summer for making up for time lost or perhaps looking forward to far busier times when there would be less camping time. More photos, less writing this time. And I found a good photo of Clarke’s birthday party in this little yellow box of slides. I don’t know why so many of the slides are dark when copied. 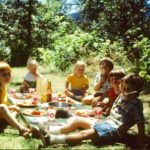 August 12th—a little after 7:00 a.m. We are camped along Hall’s Gulch, the five of us and the dog. We hiked in yesterday, a Sunday. We drove through someone’s yard and ended up parking near a summer camp.

Clarke carried a little pack with his clothes in it. Jeffrey carried his and Clarke’s sleeping bags. Rebecca carried her sleeping bag plus all her stuff. We ate lunch where Fool’s Gulch enters Hall’s Gulch. We hiked only a mile and a half but it was a hot day and quite a struggle for Clarke. I membered our taking Rebecca in to the Sinks. Four miles up the Canyon Creek Trail, when she was four years old, and how she was getting sick at the time although we hadn’t known it. Much too far for a four-year old, even under the best of circumstances. 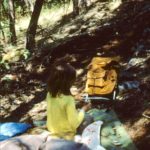 We stopped and sat on the trail while Bob went down toward the creek and searched for a good camping spot. The kids were cross and tired. Rebecca had sore feet and I thought she probably needed new boots. She had some jerky with her and passed that around. 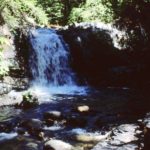 I walked on up the trail and came to Hall’s cabin, a little cabin set back in the trees; dry meadow with rusty bedsprings sitting in it.

This spot is nice—a couple of big alders—lots of small ones, a small yew right by our sleeping bags, Douglas fir, maples, Indian rhubarb in the creek. Lots of slate around here. Yesterday the children were building houses out of rocks and sticks and making signs on pieces of slate to go with those—like “keep out”, naturally. Our sleeping bags are on a rocky, sandy flat about 15 feet from the water. The children are down the creek about 50 feet and up higher, where there is more duff. We brought Clarke down here last night after he’d gone to sleep and I took him up again in the morning after he woke up.

Bob took Jeff fishing up the creek just before dinner. Bob caught a fish and Jeffrey got to eat it. “Rebecca goes today. Clarke fished right next to camp after dinner. They’re using a pole that Bob Ocock left in the garage when we bought the house. “ 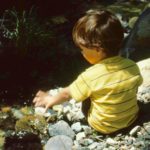 The next day I spent a good part of the day making and repairing, mostly repairing, a stick person for Clarke, a dog for Jeffrey and hollowed out a little stick for Rebecca—a tiny compartment in it. It was nearly 11 before I was through with k.p. duties, including frying the fish for Jeffrey. Bob went fishing downstream for about an hour. After lunch I took a half hour break and went down to sit on a rock for a while. When I got back Bob was working on a paddlewheel. He had it working in the creek alter a while. All done with a knife and string. Later he went fishing upstream and brought back a live fish to release in a little pond he’d made along the creek earlier. 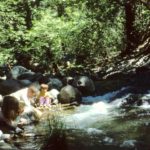 After dinner the previous day we walked up the trail to the cabin. It had really fallen apart over the years but there were pieces of stove around and that sort of thing. Bob held an old dustpan while Jeffrey took a stub of a broom and swept up leaves, clowning around. . We hiked on up past there a ways. Really had to watch Clarke because of all the poison oak. Finally all but Bob started back and he continued on up to where the creek divides. That night Rebecca came down with a flashlight with Jeffrey who had a nightmare. Later she came down. So Bob took his sleeping bag and went up with them while I stayed there with Clarke. 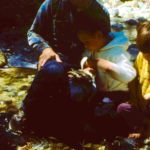 I mentioned that I’d forgotten to note that I’d killed a rattlesnake in the orchard before we left the ranch. “It’s hard to think about things like that and world politics, or Nixon resigning, which he did last week, in a place like this. Although we do have to think about rattlesnakes.” 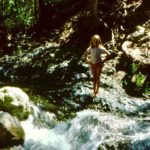 On Tuesday Bob took Jeffrey fishing and they went about a mile up the trail. Bob caught three nice trout. Rebecca read most of the morning and Clarke lay on the sleeping bags near her and played. Then they played down by the creek. I made a little hut from woven fir branches near their sleeping bags. I used some branches we already had but and cut quite a few more but tried to do it inconspicuously and from crowded trees. The hut was big enough for all three of them to sit in, crowded closely together. It was sort of egg shaped with one side open and a window opposite. I really didn’t use enough fir branches to make it thick but it served the purpose and was fun. After lunch Bob rested a short while and then took Rebecca and went fishing. They got back just as I was getting dinner ready. They had seven fish so we each ate two trout that night, including those caught that morning. Bob cooked the fish and the children were quite impressed that he knew how to do that. 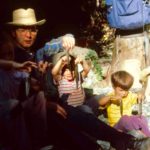 We’d seen dippers and Steller’s jays and a little wren came by a couple of times. I wrote that it was hard to hear birds because of the sound of the creek. And I blamed that noisy stream for some wild dreams that I had. But it was a good trip. 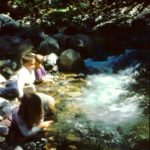