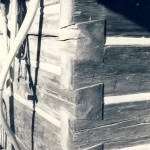 We went to visit my brother, Peter and his wife and children at Whalen Station where he was working for the U.S. Forest Service. Picked up some vegetables Alice had left for them and took some groceries. Stopped in Trinity Center to visit Uncle Stanford (Florence’s uncle) and Gertrude and picked up my brother’s mail in Coffee Creek. along with a map. The road to Whalen had been washed out last winter but there were no signs so we had to backtrack and go by way of Mumbo Creek. Their cabin had two tiny rooms and a bathroom. They slept in bunk beds and the kids slept in the truck. Angenett washed clothes by hand. We slept in a trailer but it was about out of gas so we would get up periodically to turn the gas on for heaters.

The next day we drove to Castella, Bob’s first visit to that area. Of course I spent most of my childhood there at the Crags. Several bridges on Castle Creek had been washed out. We stopped at Ammarati’s store and talked to Joe for a while. He said Mary, his daughter, was teaching in El Centro and young Joe working on a doctorate in botany.

We ate lunch across the Sacramento River in the day-use area. The footbridge there had washed out. The park ranger loaned us a key so we could drive up to the water source (our name for where the park water originated) and see the dam my father had built in Indian Creek. Then we drove to Dunsmuir for a milkshake and to see the high school. From there it was back to Weaverville where we fed the baby, talked to Leonard for a few minutes and headed back out to the ranch. We ate dinner in Big Bar.

A few days later we met Doris and Dave Ohde for the first time, at Helen and Herb Woods’, where there was a small gathering. Little did we know this would be the start of one of those life-long friendships! Florence and Dorothy Lee had to leave early to go judge a façade for the new museum.

We spent part of one night searching for a very loud cricket and finally found it and put it outside. Funny how noisy one cricket can be. The porcupine tried chewing on one of the house logs.

I saw a covey of Mt. Quail on the lawn and was afraid they might get the mouse poison under the house. Went out to scare them and found they’d left a guard on the rock pile by the back porch. He/she whistled a warning and they flew under the porch. When I walked over to them they all flew away. Bob recently saw a doe, a spotted fawn, and a spike buck in velvet. He also saw a bear by the bridge.

Labor Day weekend Bob dug a large rock out of the lawn, fixed the washing machine, and cut some wood. One night, when I’d made a 5 a.m. trip to use the outhouse, I saw the porcupine. Bob got his 22 and eventually was able to chase it into a gully where he shot it, hauling it away the next day.

One night we heard that weird sound we’ve been hearing off and on for a couple of years. We had thought it was porcupines but not so. Bob got up to look out the south window and then motioned to me. There was a full moon and the lawn was brightly lighted, with deep shadows next to the black-walnut tree. About ten feet from the shadow was a fox, seen only as a dark fox shadow sitting with its tail straight out behind. Suddenly another fox dashed from the shadow and raced around as if hunting for something. It disappeared and then reappeared, skimming across the grass. Abruptly they both disappeared. A truly beautiful sight. Later, Bob heard the barking, rasping sound again. He got up and shined his light, and the fox growled at him.

A week or so later we were expecting my younger brother and his wife to arrive around 6 p.m. but by 9:30, with them still not having arrived, Bob drove into Big Bar so he could call to see whether they’d left a message with Leonard. They hadn’t. At 5 a.m. they came roaring up our road in full moonlight. Fortunately Bob had left the gate open or they would have faced a two-mile walk. We gave them coffee, unrolled sleeping bags and blew up air mattresses. They had left Fresno at 5 p.m. Then everyone went back to bed. We were up by 9 a.m. but let them sleep another hour. We took them up to Eagle Rock lookout although we had to run at some of the hills with our VW. We all enjoyed the view. Mary Woods was working there and her husband was on Ironsides. Back at the house we ate the previous night’s dinner, fixed sandwiches for them, and off they went, Seattle bound. Well, after an overnight stay with friends in Castella and a hike to the Crags.

A couple of nights later I saw a ring-tailed cat on the lawn. It was at the south end of the house and appeared to be watching a porcupine. When my light hit it, it moved quickly off, lifting its feet high.

One night Bob left the house at 8:30 to go work on the tractor even though it was dark. “He drives himself too hard sometimes.”

I saw the skunk again. He ran up the road at kind of a rocking gallop. We saw a fox on the lawn last night. I had a fire in the Rightway Stove. Temperature down to 40 degrees. It was cold and windy although beautiful. The air was so clear. I chopped some wood and had a fire in the cooking stove most of the day. Took advantage of that to make some apple Betty pie.

I had a brief lesson in shooting the 22 in case I needed it now that hunting season was starting and there could be trespassers. I hit the rock I was aiming for and got close to others. Spouse seemed satisfied.

Saw the skunk again, nearly running over it on my way to the outhouse. It was hunting in the starthistle along the path and I was about 10 feet from it. The skunk wiggled through the thistles and went down on the lawn to investigate some bird feathers left by the cat. Reading over this material I’m thinking I could write a short essay on Trips to the Outhouse– Wildlife Sightings.