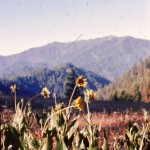 Back to the rising at 5:30 a.m. routine with Bob leaving at 7:00 for work. It was nearing the end of July and on this day I scrubbed the upstairs as well as one can with a sponge mop—mostly in the middle of the floor and around the edges of boxes. Washed three small rugs in the washing machine. Bob brought the cat out, hoping it might help with the mice problems.

The next day I mopped the downstairs and washed diapers. Bob had figured out how to run the lamp that my parents, Mary and Ben, had given us and it really was nice. Gave a soft light instead of the harsh glare of the Coleman.

My days were full and often fractured as I adapted to and tried to establish a routine for life with a newborn—the nursing and changing, the wonder and the fatigue—along with trying to keep up any sort of house and yard work. There were visits to the doctor in town for baby checkups (July 18th she weighed 10 pounds) and to buy groceries. “Haven’t accomplished much today” was a common journal entry. She had colic, often beginning around dinnertime, so a lot of time was involved in holding her and trying to ease her discomfort.

We loved having the shower upstairs and off the porch. Bob could take a shower before going to work and, with the gas hot water heater, I didn’t have to have a fire in the stove for us to have hot water, a particularly uncomfortable situation in the heat of summer.

One night in early August, we heard a strange sound around 3 a.m. Bob went out to see what it was and discovered two porcupines, one on the ground and one up in the nearest apple tree. The one in the tree was getting apples. I saw the striped skunk a few nights before that. I think it was getting grasshoppers as it was hunting on the lawn. The flashlight didn’t seem to bother it. In fact, it came toward me, up to within about 15 feet of where I was standing on the porch.

Bob Jones came with his D-6 cat to work on the road. He and Bob worked on the road for a full 12 hours. They got the stump oout by the rock sliode and nearly finished working on the creek channel.

My parents wrote that they were to be transferred from Turlock Lake to Bliss State Park at Lake Tahoe. They were delighted and really looking forward to being back in the mountains and away from that hot reservoir park.

I found time, over a few days, to put another coat of varnish on a kitchen cabinet and to carry rocks from driveway down to the cellar ara and stack them.

One day Denny Bungartz (sp?) (U.S. Forest Service) and his wife and Abe Nunn and another man arrived. Denny dropped off Abe and the other person who then drove Hondas up the hill to inspect trail work that was being done north of us.
One thing about having an outhouse is that you see things in the middle of the night that you wouldn’t otherwise—the stars that are so distinct with no lights to interfere, and animals that are just going about their nocturnal business. I saw the skunk again (August 9th) last night. There was a nearly full moon and both the skunk and a porcupine were out on the front lawn. When my light hit it, the skunk crouched down. Then it ran directly toward me, toward the ramp up to the porch. My first thought was that it was rabid. But it went under the porch right near the ramp, forgetting to take its tail along. Then it remembered and the tail also disappeared. I tiptoed softly across the porch and went on to the outhouse.

After the recent bulldozer work, the road was much smoother and easier to travel.

We had a rainstorm and of course the laundry was hanging out on the line. A good time to bake a few cookies though with the cooler temperatures. That weekend Bob cut slash in the creek and worked on the tractor. I managed to find time to put one more coat of varnish on one side of the kitchen cupboards but otherwise was busy with “domesticity”.

The baby was getting more and more social, smiling and making noises and responding to smiles. She could raise her head for long periods. She seemed fascinated by the rafter and knots in the pine boards of the ceiling upstairs.

The following Tuesday when I got to the gate with the truck there was a low whistling noise coming from the radiator and I noticed steam coming out from under the hood. Decided it was just as easy to go down the two miles to the highway as to go the two miles back to the house. I let the engine cool down near the highway, found an empty beer can along the road and put two cans of water from Prairie Creek into the radiator. At Big Bar I got the radiator filled and drove on into town. Carl soldered it for us to hold us temporarily.

Bob was spending time after work and on weekends cutting slash in the creek or working on the tractor. He put handles and hinges on the cupboards that I’d varnished and they looked so much better. We had a lot of old half pipe from mining days that we had hauled from downriver someplace. (I think that’s the pipe that we hired David Adrian, Bob’s brother-in-law, to haul for us shortly after we were married. It was a lot of work. We ended up using a lot of it for downspouts for culverts to prevent erosion.) Nancy and David and their two daughters stopped by one afternoon.

Toward the end of the month I was up at 4 a.m. with the baby when I heard a loud noise from downstairs—sounded like a huge mouse! I took the lantern and looked out the window in the door and there, gnawing on the doorsill, was a large porcupine. Bob came down and we chased it clear around the house on the porch. It would go to the edge, look over and then continue. Finally, we threw chunks of b ark from the woodpile at it and it went off the porch, dropping about three feet to the ground.

That August we had rain at least one day a week. And usually when there was laundry on the line.