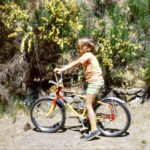 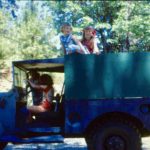 June 29th was a busy day involving taking children to Linda Lindsey’s getting a tetanus booster for Clarke on the way, and then the car to be lubed. Walked from there to Florence and Leonard’s to pick raspberries. Vernon and Ruth Ryan were there and I talked to them for a little while. It took two hours to pick all the berries and I was very hot–felt almost sick. Got over two gallons though. Then walked back to the service station, got the car, picked up the mail and then the children. Bought groceries. Went home, put Clarke down, changed some more sprinklers, washed lettuce and berries, went with the children to the library where we met Helen Woods who invited us up to their place after dinner.

Bob and Clarke went to work on the truck for half an hour while Rebecca and Jeffrey and I went up to the Woods. The wind had come up suddenly and it was much cooler. Both children did a lot of swimming. Jeff could kick nearly across the pool and Rebecca went all around the pool stopping whenever she needed to breathe. Jeffrey was pleased when Helen turned on the heat in the “drying room” (sauna). After Clarke arrived with his dad he enjoyed floating with me holding him up.

We went inside for ice cream and coffee and the children explored the house. They loved the loft. We got home around 9:30. Showed the children the last batch of slides and they got to bed around 10:00. I was reading a good mystery and didn’t realize how late it was until Bob got home from working on the truck about midnight. Frustrating book. The last two chapters had a number of blank pages.

I mention driving back and forth to the ranch in the VW with the dog in the front passenger seat, Rebecca and Jeffrey in the back seat with the ice chest between them, and Clarke in the back compartment with laundry—groceries that weren’t in the ice chest stuck wherever there was room. 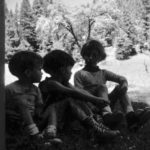 All the above was written while I was sitting in their tree house.

Sunday, July 1st I was sitting out on the front porch drinking a glass of iced tea. Bob had come out that morning with the weapons carrier, leaving town at six and getting there at 8:00 a.m. Florence had come out and ate lunch with us, bringing the paper, lettuce, beets and three fish that Leonard had caught in Oregon. She drove Bob back to town. They took Rebecca, who was going to stay overnight with the Meyers, and Clarke and Jeffrey for the ride. Bob didn’t really want to take them all but “it sure was great to have some time without bickering or requests for attention.”

I practiced kicking in the pool. Then the dog and I walked up the hill to go over the old roads. Went up to the clearing then down to where we stored the half- pipe a few years ago. Lots of bear droppings there. Then down the jeep trail to our road and back to the pool again.

Saturday I had gone up to clean out the bathtub settling tank so we could fill the pool with relatively clear water; baked a raspberry pie (Jeffrey mixed the dough); made Clarke turn his toad loose (I thought it was dying from too much attention); took Clarke up to look for caterpillars in the milkweed (we brought home a tiny one); did three batches of laundry; fixed lunch for the children to eat in the tree house; chased the dog out of the garden about three times; helped Rebecca and Jeffrey use the little printing press. By then it was 5 pm.

Had been reading a book called “The U.S. Forest Service” by Michael Frome. Also one about collecting birds and animals in S. America called “The Drunken Forest”.

The next day was “an “unbelievable day. It’s a wonder I have any sanity left.”
Bob and I had been up until midnight Sunday night working on a letter to the Forest Service on timber management that was due the next day. He wrote and I typed and proofread. “It was a good letter and he used a lot of information from Peter’s paper on clear-cutting Douglas Fir and Michael Frome’s book. “

He got up at 5:00 a.m. but I didn’t get up until 7:00. I finally got things organized and the boys and dog and I left at 9:30. In Weaverville we picked up Rebecca from Meyers’ and went to the pool where Rebecca was in Advanced Beginners and Jeffrey in Beginners. We went to the post office and then to Brown’s for lunch. Bought groceries. When we got home I noticed that Kinnik-Kinnick’s eye was swollen and oozing. I called the vet in Redding and was told to bring her down. So then I had to find a babysitter—finally got Karen Austen. The vet took a ½ inch long foxtail out of the dog’s eye.

Got back to town around 4:30 and stopped to get a paper before going up to the house. There I overheard a boy about 10-years old saying “They ought to arrest someone who wears pants like that downtown.” I didn’t pay much attention, not seeing anyone to match his comments. When I got home I discovered the back seam of my shorts was split open. “He was right!”

After I took Karen home I ironed two of Bob’s shirts, expecting him to come home but he didn’t. So I left a note for him and we went to the Brewery for pizza for dinner, eating out on the porch. I called Florence from there so that if Bob was looking for me she could tell him where we were. 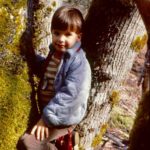 From there we went out to the ranch. Part way up our road the dog took a flying leap out the window. I slammed on the brakes, fully expecting her to have broken her neck—she had the leash on, attached to the seat belt holder. Up popped her head and paws and she was looking in the window at us like, “well, here I am”.
Bob arrived about half an hour later. He’d been delayed by personnel matters.

By July 3rd I was feeling sorry for myself. Bob had been invited on a pack trip with the Forest Service and I was envious I guess, thinking how nice it must be to just be able to take off like that. We were going to go on a trip with Candy and Jim but I’d have to get a sitter, get all their clothes together, make sure there was enough food for them, and then do the cleanup when we got back. Nothing like some fatigue to have one look on the dark side.

On the 4th apparently we didn’t go into town to see the parade, etc. We were all out at the ranch all day. Bob worked on the truck in the morning. I weeded in the garden for an hour and-a-half. Rebecca had yeast dough rising during that time for rolls. She was rolling out dough and shaping rolls while I was fixing lunch. 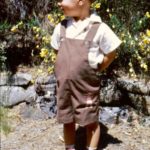 Put Clarke down f or a nap but once again he wouldn’t sleep so I let him stay up.

After dinner Bob and the older two went down to the creek, getting home a little after 9:00. Bob had taught Rebecca to put the truck in neutral and to make the winch release the cable and to turn it off. She releases cable while Bob pulls on it.
Bob flew to Bishop and back on the 3rd.

Jeffrey fixed lemon pudding for dessert, with some assistance.

I was starting to read “Wild Heritage” by Sally Carrigher.

July 5th I took the children for a walk up to the bathtub settling tank so I could clean it and then we went on up into the woods. There were lots of mosquitos in the shade. We stopped at the rack where Bob used to unload mining pipe. This was the first time the children had been there. I wished I had taken my camera as there were meadow grasses with seeds silvered by backlight from the sun and one scene with two copper madrones, trunks against the mountains across the creek, that was the essence of the limberness of madrones, like muscular thighs and a startling contrast with the very deep greens of early morning. The children were surprised to find themselves down at the turn where the jeep road enters.

Rebecca and Jeffrey and the dog ran ahead. Clarke and I investigated a delicate spider web with the spider in the middle. He touched it with one finger and it scooted off to one side of the web. I had to ask him to not pursue it. We watched a big carpenter ant carrying its egg and found a raspberry bush with one berry on it, just for Clarke. He enjoyed walking through the “green tunnel” just below the house where the alders are thick.

Back at the house the boys came up to the garden to get radishes while I was weeding. Kinnik-Kinnick took two of Clarke’s and ate them.

That afternoon Rebecca mixed chocolate pudding and took the laundry off the line. I showed Rebecca and Jeffrey how to play cars with roads in the dirt and rocks and blocks for buildings. Jeffrey and Clarke ended up playing in the mud of the “mill pond” and had to have showers before dinner. After dinner Rebecca went with Bob to haul rock. We had lettuce and radishes and a few greens from the garden with dinner. 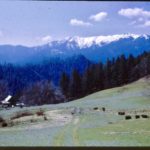 Cheryl was in an automobile accident. She and Kathy Cleaves were in a pickup going toward Redding and ran off the road near the gables. Cheryl had a dislocated shoulder and Kathy a concussion.

The following week we would be backpacking.