Read “Home to the Wilderness” by Sally Carrighar, which the nursery school parents gave me as an end- of-the-year present. 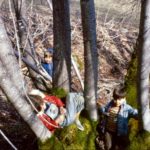 I had just talked to Bob on the phone. He told me how to get the generator started but I couldn’t do it because the battery was run down from my trying to start it all evening. I was supposed to take the air filter off and hold my hand over it while starting it. So I was all greasy and still writing by candlelight. He was in town and had been working on the steering for the weapons carrier (later called the Boom Truck) out in the garage. On Friday he was in town again working on the truck. Don’t know whether he’d been there all week or not.

Sometimes I whined.
“I get so tired physically and mentally and the prospect of a summer of his working on the bridge doesn’t make me feel too good about our existence. I worry about him spending every spare minute working. Then again, maybe he thrives on it. I think he thrives on it until he gets an opportunity to relax (very rare), then for a while realizes what he’s missing just before he plunges in again. I really shouldn’t complain I guess—am fortunate to live in such a nice place for the summer. But I hate projects. They hang over one’s head like a dark shadow so that time spent daydreaming or reading or playing with the children is always overshadowed by the feeling that one must get back to work and accomplish something.” I think sometimes keeping up with two places was overwhelming. 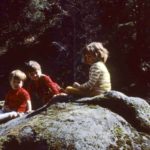 Tuesday I mowed the orchard in the heat of the day and then realized I was going to have to start being a little more careful about doing that because of fatigue. That evening Bob brought out a dress and shoes from in town and I dressed quickly so we could go to Big Bar. I’d fed the children and we dropped them off at Debby Sankey Davenport’s, across from Big Bar Station, then went to the restaurant for a dinner meeting of the Trinity Forest Forum. Florence Miller and I were the only women there. We sat across from Horace Jones, and Les Arbo. And I was catty corner to the Millers, Ron Covington and John Thomas (Fish and Game). Bob talked most of the evening with Chuck McFadden, who sat next to him. Standard Oil Company gave a slide talk on the energy crisis.

On Thursday of that week, after running various errands and moving sprinklers around in town, I picked up the battery and the children and got out to the ranch around 6:00 p.m. I still couldn’t get the generator started. Bob got out there around 9:30 and hooked the generator up to his car battery and cleaned the spark plugs. I ran a batch of laundry immediately. In the morning he used his car battery again and decided I must have broken one of the terminals on the battery. I did three more loads of laundry and then shut off the generator. We would get a new battery the next day.

Friday I cleaned the settling tank—bathtub—and drained the pool so I could fix the liner so the place where the bear chewed on it last fall was held together better. I made everyone lie down for a nap and I took a short one too.

I was reading an interesting book called “The California Feeling”, author Peter Beagle, photographer Michael Bry. They had two pages on Weaverville, including a picture of Moon Lee.

Saturday Rebecca and Jeff were invited to Ann Marie’s birthday party and I decided to take them in and stay overnight so that I might be able to spend some time working on nursery school things. I’d have to get a sitter for Clarke because Florence and Leonard were taking Uncle Stanford and his wife, and Aunt Nell to Malheur Wildlife Refuge in Oregon. They were taking their big camper truck and pulling a trailer.
Rebecca and Robin Meyer went to Brown’s (new name for Varney’s?) so Robin could spend some money that was burning a hole in her pocket. They went through the culvert under the highway because Jeannie and I were worried about cars not stopping, even when people were in the crosswalk.

Sunday we went out to the ranch although it took quite a while because we kept stopping to pick wild raspberries. And we stopped at Little French Creek where the children built dams, played with boats, and got cooled off. KinnikKinnik indulged in her favorite sport of chasing grasshoppers and butterflies and running through the water. We made her follow us up the road to get home from there. 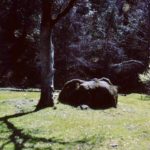 Clarke found a toad and carried it around for hours. He wouldn’t turn it loose so I put dirt and grass in an empty coffee can and put in a few bugs—little grasshoppers, sow bugs and earwigs and put waxed paper with a rubber band over the top. I was hoping it would survive the night. He wanted it to go to bed with him because he said it didn’t like the dark but agreed to keep it in the can on his dresser when I assured him that toads like the dark.

Bob got home around 10:45 Sunday night and brought a new battery so then we had lights. He had trouble getting to sleep and kept tossing around. Around 2:00 a.m. he got up and took a shower. When the alarm went off at 5:00 a.m. I didn’t get up with him but dozed off and on listening to him get his own breakfast. Clarke woke at six and had to be convinced to go back to bed. I was wide awake at 7:00 and so were Jeffrey and Clarke so I got up. The upstairs was really just one big room with dressers and a flimsy partition between sleeping areas, and the shower partially blocking off the bathroom area.

That day I took the children and snacks and went over to cut ceanothus along the road. The children played and fought for 1.5 hours while I did this. The ceanothus was the worst of the brush. The lower branches die and leave a tangled dry mess. And it grows fast. We went back to the creek and stopped there for about an hour. The children found frogs, and two salamanders with gills. The butterflies were quite tame and Clarke and I both held one several times—tortoise shell I think, black with orange tips and white dots. I saw a silvery-gray shrew along the bank and all three of the children were able to see it as it scurried along, under rocks across the dirt, all between the edge of the creek and the roadside. After about five minutes it scooted off downstream.

We came home and had lunch. Rebecca wanted to make something out of the yeast cookbook but I didn’t feel up to it. I went upstairs and lay down and read and dozed. She made hot cross buns, which turned out very well. When I came down she had the dough rising in a bowl on top of the refrigerator and the dishes cleaned up and the whole downstairs straightened.

I went down to the pool and began tossing bugs out and asked Rebecca to help me, which she did. After the boys woke up (Clarke from his nap and Jeffrey had fallen asleep in the rocking chair) we all used the pool. 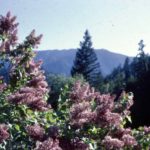 On Tuesday I went down to the barn and got some chicken wire and mended the hole in the fence on the porch the dog had been using (after 3 batches of laundry and mopping the downstairs).Rebecca took all the clothes off the line for me and made chocolate pudding for dessert.

I showed Rebecca and Jeffrey the last National Geographic with the article on the newest volcano in Iceland and both were quite interested. Jeffrey had been asking questions about volcanoes and earthquakes so I wanted to be sure he saw it. He’ll probably think about it for a couple of weeks and them come up with some more questions.

Bob had to go to Garberville so was late getting home. He’d been working on something to do with the brakes on the weapons carrier/boom truck that night. The previous night it was part of the carburetor. He’d bring pieces home and then stay up until midnight working on it.

On Friday I’d sent all the children to bed for naps and then sat in “their” tree house writing in my journal. “Green leaves all around rustling, dappled sun, a hornet (hmmm, not so sure I like that) and peace. The children were all tired and fighting so I said they must rest for an hour.”