Just got back from a morning walk. We’re camped at McDonald Lake with Candy and Jim Fields. I got up around 6:20 and climbed up to one of the “shelves” above the lake. Watched the sun come up—always an exciting experience with a lake and granite cliffs. Didn’t see much animal life. Lots of hummingbirds—saw one get a drink from a waterfall, hovering in the air. Lots of juncos. Saw a frog in a little pond. Melting snow patches up there make little ponds and rivulets. Bob’s still asleep. Candy and Jim are up. 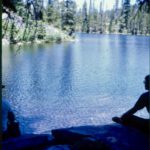 We had a very pretty hike in to Stoddard yesterday. It was very easy with many little meadows, one with pitcher plants in bloom. The trees around here are mountain hemlock, foxtail pine and white pine. Heather and pinemat manzanita are blooming, buttercups and penstemons. Shooting stars are just fading. 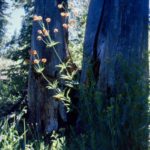 We swam yesterday (Monday), while Jim hiked up to Holland Lake. Some fishermen came along after a couple of hours as we were sprawled out on the rocks. We jumped back in and swam back to camp. Then we hiked up to the little lake up above, much smaller and shallower but very pretty. We swam there a little and on our way back down met Jim coming back. Lasagna, wine and raspberry cobbler for dinner.

Jim didn’t have any breakfast and Candy just had two cups of hot chocolate. Bob and I both had cereal. I don’t know how they do it. 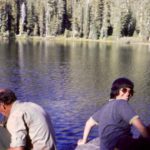 After breakfast two men came out on the rocky point and asked if we had any extra toilet paper. They wanted to know how to get to our campsite but Bob told them he would meet them at the trail–that way they wouldn’t be in our camp. The campsite was right on the lake, under a clump of hemlocks—a small rocky point was where we cooked and ate. All the rest of that part of the shore was covered with willows that extended back 20 feet from the shore. We ploughed through them to leave the camp.

Mid-morning we went swimming again. Bob went to join Candy and Jim (Jim was fishing) over by the far shore. I joined them about half an hour later on an air mattress. I could look down and see the ripple patterns reflected as light geometric shapes on the bottom of the lake. The mattress shadow was the center. The whole thing was like a large spider web with me at its center. 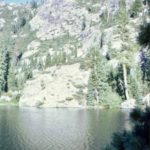 We ate lunch and left camp around 1:30 or 2:00. Had a very leisurely walk out, stopping frequently to look at things. Candy showed me a snowplant—the first I’d seen in the Alps. A group from Redding passed us on our way out. One of the men worked for the U.S.F.S. We’d met him before at a meeting. Lots of wild mint growing on dry hillsides—a new phenomenon for me. Very fragrant when stepped upon or picked. We got to Candy and Jim’s about 5:00, had some lemonade and went back to Weaverville. 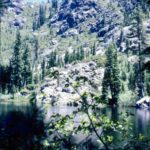 Stopped at the Jolly Cone for a milkshake dinner. It was quite a hot day. Then went home where Connie Martin and the children seemed quite happy with each other. They’d spent a lot of time at Connie’s house. She’d given them each a stuffed animal—Rebecca and Jeffrey each a monkey and Clarke a little dog. We really had a good time and Bob was talking about doing more of that.

The next day was cleanup—vacuumed and dusted the Weaverville house, which was really awful. Took the children to swimming lessons where I talked to Barbara Michaels and Bev Forero. In the afternoon took Clarke for blood tests after seeing Dr. Breeden. Clarke looked pale to me and complained of being tired. Apparently the blood tests showed he was fighting something off. That afternoon we went back out to the ranch.

Tuesday morning I did four batches of laundry then went down to where the trail meets the road and cut wood for an hour. Clarke walked down with me and Rebecca and Jeffrey joined us later. We went home and had lunch and then I took the car down and picked up the wood. After that I noticed that the right tire was nearly flat so had to change it.

On Wednesday, Bob still gone on his pack trip, I drove to Big Bar to get margarine. I’d almost decided not to go but the children were anxious to go, wanting a snack I suppose, and we needed more gas for the lawnmower so we tied up the dog and went down. I bought a pound of margarine, two apples and a newspaper and got Clarke and Jeffrey some ice cream. Rebecca had taken some of her own money and bought a little wallet with play money, credit card and checkbook. Got five gallons of gas for the lawnmower.

We stopped at the creek for about an hour on the way home. “That is such a nice spot!” The creek was just right for dabbling in. Clarke was quite content playing with his stick boat (or “whale”); Jeffrey was building rock walls and bridges; Rebecca was exploring a little—discovering the upper pond, and chasing frogs. We saw a fish about four inches long, a salamander, a frog and a minnow—none were caught although attempts were made.

I perched on a rock above the lower small fall and tried to become part of the water, the rocks and the trees. That little fall forms a bubbling pool at its base and the thought kept occurring that the whole stream moved almost as one piece, like mercury, except for the bubbles—especially at the top of the ripples where there is a smooth, almost molten look. On the way out I dug up a tiny Indian Rhubarb which would have been covered by Bob’s rockwork soon. Didn’t know whether it would survive but planted it below the drain valve toward the barn where there is a constant slight trickle that keeps things damp.

When we got home the dog was thoroughly tangled and had trampled most of my gladiolas.

Rebecca got stung by a bee on the bottom of her foot near the toes while I was mowing the lawn. It swelled up quite a bit. 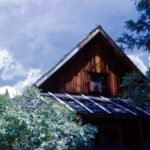 After lunch and Clarke’s nap I suggested to Rebecca that we make chocolate chip cookies. Lightning and thunder had begun and we sat in front of the window stirring and watching lightning. No rain.

Candy called to confirm that Peter Richerson could speak to the Forest Forum in August.

Jeffrey complained at lunchtime that his teeth felt funny—like they were moving back and forth, even when he wasn’t chewing. I took a good look that night and found that his two front teeth were loose—that’s a little early. He was rather pleased with himself but a little worried too I thought. He wondered if he would swallow them during the night. I assured him that they weren’t that loose and that even when very loose he wouldn’t swallow them.

Clarke was hurrying upstairs so he could look out the window at a pink cloud of sunset, which I was recommending, but fell backwards down about three steps, hitting his head. He later complained of one ear hurting when he lay on it but seemed ok.

The dog jumped on Jeffrey that afternoon, knocking him over and putting a hole in his foot with her claw. I was certainly glad that they had all had tetanus boosters. I cleaned it out and put antiseptic on it and a bandage. We needed to get the dog’s nails cut but I wanted to wait until Bob could help.

“It had been quite a hectic day, except for the creek interlude, and yet tonight, after Clarke’s fall, we were all lying on the bed upstairs talking and it was kind of nice—especially after I checked on Jeffrey’s teeth. Everyone was suddenly very close for a few minutes—Rebecca remembering when she first lost hers, Clarke realizing something important was happening, Jeffrey aging before my eyes. It was late—about 9:00, but for once I wasn’t yelling at them about it. All had clean heads and smelled good, Jeffrey having washed his own in the shower for the first time. “

I practiced my accordion that night, reading music.