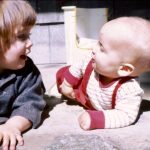 My journal is filled with a lot of day-to-day meanderings—batches of laundry, trips from the Weaverville house down the hill to run various errands, including buying groceries. I started using a pen that had green ink so there are pages that are hard to read now. These jottings may be trivia, but for me they were a way to track my days, like minutes on a clock, days on a calendar, months in a year.

Our daughter was 2 ½ now and, with a new baby brother, challenging to deal with, as are most from age two to three or four years old. She was also very bright and persistent. Dick Morris probably doesn’t remember the time I rushed into the hardware store where he was talking to a customer, handed Jeff (before I started using the backpack) to him saying “hold him”, and rushed out again so I could use both hands to get my meltdown child into the car.

We did get out some evenings for meetings or events and, from what I’ve written it looks as if I often tried to tie a grocery run in with a stop at Varney’s for coffee. If I had kids with me that would include lemonade and a snack. Rebecca’s favorite part was to pay for our snacks. I started carrying Jeff in the backpack and that gave me a lot more walking freedom. Bob was coming home for lunch every day and, if we timed it right, we could walk downtown and then ride back with him.

The attempt to negotiate with the neighbors to run a sewage line through their property didn’t work and we’d decided to put in a tank with a pump down at the bottom of our driveway and pump up into the town system. So Bob was figuring out how to put all that together, where to run the line down the hill, etc. Also in the works was the development of a town water system for our side of town with Cal-Pacific.

Vietnam was in the news a lot. “News on TV tonight showed a bombed out town in South Vietnam and some of the injured residents—many children. Such an awful situation. We worry about whether our children are getting along with others; whether their teeth are crooked; whether they have mumps or nightmares, and those poor youngsters and their families are living in one long horrible nightmare. Are we really helping them? Does our democracy mean more to them than existence in a semi-peaceful state? I don’t know. With the North Vietnamese in Saigon now we’re not progressing much. These people must live a poor existence at best and war is such a terrible addition to this. I was looking at the eyes of those children and thinking about what I would do if with mine if I were in that position. Even if the war were to end tomorrow they would be marked mentally, if not physically, for life.”

Rebecca had some play dates with Nancy Van Duyn, whose father also worked at the phone company. Her mother, Marilyn, and I got along well and this friendship continued for many years.

We celebrated Leonard’s birthday with various family members at the cabin out Canyon Creek where there were about 28 inches of snow.

There were nights of very little or often-interrupted sleep. “Rebecca was calling for me almost every hour last night.” And Jeff started waking up at 4:00 or 5:00 a.m. I’d do yard work—raking pine needles and picking up pine cones for as long as Rebecca kept entertained playing and then would stop. Jeff could nap in the backpack or sleep in the house. We found flowers that we hadn’t known were there since it was our first spring—crocuses and violets and others. She really seemed to like playing outdoors.

We attended Historical Society meetings—always interesting. I usually made refrigerator rolls to take to the potluck. Barbara Austin sometimes took care of the children and sometimes we got a sitter to come to the house. The February meeting was a history of the fire department, put on by Hap Miller. 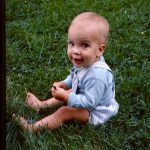 One musical program we went to at the high school was put on by a group from Humboldt State. They sang Elizabethan songs, a self-composed opera, and folks songs. They had performed at the high school during the day and the evening program was sponsored by the Historical Society. Only about 30 people were there though. We went to a Trinity Player’s performance of Harvey.

Bob was spending some of his spare time working on the burglar alarm system for the new museum and he put an FM antenna up on our roof.

I got called to substitute at the high school several times. I didn’t have a high school credential but there weren’t a lot of subs available. This was when the high school was still down on Mill Street. The first time Barbara Austin came to our house to watch the children, bringing her two children with her. It was just for an afternoon: a typing class, reading and PE. The day before had been a vacation day for Washington’s birthday and apparently many decided to take Friday off as well because only about 40% of the students showed up. Afterwards the superintendent wasn’t sure I’d get paid because I didn’t have a high school credential. I got paid and eventually a provisional credential to sub.

Another time I substituted for a full day for Mr. Large– two U.S. History classes in the morning and two geography classes in the afternoon. I think this was the time I went to Austin’s with my sandwich and sat there holding a nursing baby with one hand, eating a sandwich with the other and trying to pay some attention to the big sister before heading back to school. I showed two movies. Jinx Fores and Beverly Forero were also subbing that day. 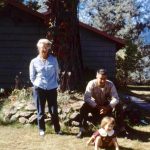 My parents came to visit after Jeff was born.

We made a few short trips out to the ranch to make sure the road was okay and to start up the generator for a while.

In spite of being our “town house” there were still maintenance problems that we hadn’t anticipated. The washing machine drained into a laundry tray and Bob put an attachment on the drain hose so I could attach a garden hose to it and drain the laundry water out into the yard. This meant a lot less water going into the septic tank and less sewage water in the ditch along the driveway, eliminating the bad smells outside every time I did a laundry.

I typed an application Bob was submitting to the health department for adding on a room even though we were connected to unapproved water (the ditch). Now I’m thinking they probably approved it because eventually there would be a good water system but maybe also because we were putting in a sewage system that would be healthier than an overflowing septic system.

We invited Florence and Leonard over for a birthday breakfast for her. The menu included hotcakes, bacon, scrambled eggs (with chives, mushrooms and creamed cheese and a dash of sherry), oranges soaked overnight in plum juice, coffee and milk. Ha! I probably haven’t put that much effort into a meal since! It makes me hungry reading this.

Florence and Alice took up jogging. (I have no memory of this and it’s wonderful to think about!).

We attended another Historical Society meeting that featured the Hoopa Indians (they demonstrated dances, songs; brought pottery and baskets). I mentioned that I’d like to have learned more about plants they used because I was planning a display for the new museum. At that same meeting Bob talked about the burglar alarm and also plans for smoke alarms. Afterwards we went to Austin’s to get the children and stayed for some time discussing Vietnam, which was to be the topic of Jim’s sermon the next day. 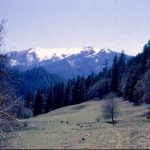 On another trip to the ranch, we were joined by the Ohdes, who had walked in from the gate. There were too many rocks on the road for their car. We gave them a ride in the back of our truck when it was time to go and ate hamburgers in Big Bar. On this trip we discovered that someone had shot the lock on the gate and jammed it. We used the phone company lock to get in.

Bob began to take a strong interest in the high school and was thinking about running for the school board. He began going to meetings.

“Ruth Dowdakin came up one afternoon and visited for a couple of hours. She was Hal Goodyear’s sister and lived in Berkeley. She had seven children, ages 4 ½ to a senior in college. She was much interested in the Indians of Northern California and wanted to help with our museum exhibit. She was very interested in the uniqueness of tiny tribes compared to the vast blocks of the Indians of the Eastern United States.”