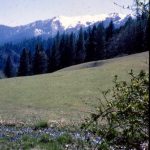 We continued to stay really busy. With the snow gone there was more yard work at both places. I was trying to jog now and then, using the backyard. I had it figured out as to how many times I needed to run the length and back to make particular distances and would try to do it while the children were playing or napping. It helped keep me sane I think.

Bob continued to spend a lot of time on the burglar alarm at the museum and would go down after dinner and work until late, as well as a lot of time on weekends. Night after night he’d be down there. Once I noted that he hadn’t gone!

He also spent a couple of evenings down at the high school welding on the drag for the road.

One Sunday in March I took Rebecca to church. She thought Jim Austin (Congregational minister and husband of Barbara who often took care of the children if I subbed) worked in “daddy’s office” and I thought she should see where he worked. She was amazingly good, though restless, and I’m sure welcomed the cookies and punch in the Parish House afterwards where I chatted with Pat Hicks, Alice Jones and Jan Hooper.

I took the kids to the elementary school to have their pictures taken and had coffee with Jim Holland, Ruth Brandes and Betty Gorsuch.

One Saturday, when Bob was on standby. I took Rebecca, Karen and Linda out to the ranch with me. He could take care of Jeff while being on standby. I needed to get my paints so I could do the illustrations for the Native American display of plants at the museum, and Bob needed some metal. When we got out there I put the rack on the VW, put the metal on the rack, got my paints and dug some plants out of the bog to put in with our polliwogs in town. We ate lunch by the creek from the upper spring. “The peach, plum and pear trees were in bloom.” When we got back to Big Bar we got ice cream cones before heading home. The Townes, owners of Big Bar Station, were building a dining room and adding on a small bar.

One of my projects was making a plywood slide for Rebecca and a teeter-totter (a plywood board placed across a box). I sanded off some of the rough edges and later painted the parts various shades of pink, yellow and blue. I took an old sawhorse, tacked on a string tail, and gave it a seam-binding bridle. She loved her “horsey”—said it hurt its tail and that it was doing exercises going up and down. 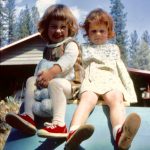 Every now and then I substituted at the high school, usually a half-day. I was asked to sub at the elementary school in Lewiston but, since I was still nursing Jeff, couldn’t be gone all day. A full day at the high school was possible because I could feed him during my lunch hour.

We’d go out to the ranch usually for a half-day. I’d try to get more varnish on the pine boards of the ceiling upstairs, and Bob would work on the road. I couldn’t get much done and usually spent time with the children. April 6th and 7th we stayed overnight though. Sunday morning I wrote, “Children restless last night. Didn’t get much sleep. A beautiful morning –mist in the canyon, robins singing, a woodpecker hammering on the house about 6:00 a.m. waking Rebecca and she woke Jeff.” 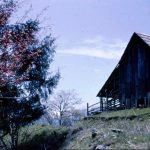 It was nice to cook on the wood stove again—the smell of bacon mingling with wood smell. After breakfast, when we were outside, Rebecca found a 3-point deer antler.

Bob did some work on the kitchen cabinet that held the sink and did more roadwork.

In late afternoon Jan and Bob Hooper came with their children, Jennifer and Dennis. We all ate dinner at Big Bar Station on our way home.

Florence and Leonard bought Daphne, the mule. She was a small mule and quite gentle. We were to buy one-third of her. We all went to meet Daphne and she became part of a number of visits and sedate rides around their property. She became an important part of their family pack trips. 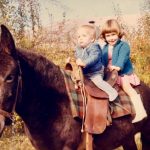 I started painting plants (water colors) for the Native American exhibit at the museum. I’d researched plants that they made use of and had given Pat Hamilton (at the Trinity Journal) the information. She did the printing to go with the paintings. I don’t remember all of the plants but noted that I’d worked on a dandelion, a pine cone, and Indian rhubarb. This was work I could do after the children had gone to bed.

Total eclipse of the moon on Apri 12th. On the 13th all the apple trees were in bloom when we went out to the ranch. I planted raspberries and Bob worked on the cabinet. Sunday Rebecca woke up at 10 minutes to 6:00 sayingl “Easter is coming”. She hunted eggs in the grass, still wet from the previous night’s sprinkler. French toast and bacon for breakfast. While Bob worked on taxes I planted lettuce, carrots, squash, cucumbers and the rest of the raspberries. Also planted Fiddler Henry beans, which I think would have been from Florence’s green beans that she planted every year, handed down through the family. She always saved a row or two for drying for the next year’s crop. 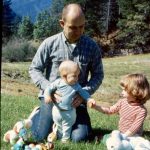 Bob, with Jeff in the pack, flew a kite with Rebecca but eventually it landed in a tree. While they were doing that I varnished one more board on the ceiling upstairs.

One day, when Nancy Van Duyn was playing in Weaverville with Rebecca, I looked out to see that Rebecca had opened the gate of the fence behind our house and the two of them were heading up the hill through the brush. They were half way up to the reservoir.

Another day we met Dave Ohde (Doris was painting a bedroom) and drove to Denny, taking our car and theirs. Linda, Jeff, Rebecca and I were in one car; Bob, Dave, Eric and their dog, Maggie, in the other. This was my first trip to Denny.

“The road takes off near Willow Creek. The first part was paved and the rest dirt. It went up over quite a high mountain and then down the other side into New River. There are some beautiful ranches just before Denny, the Daly’s being one. There is a telephone line in, strung from trees. No power. The Ladd store (built by Grover Ladd) is the center of Denny, containing store, post office and library. It’s a log structure with rock from the ground up to about four feet. We talked to Mrs. Holland who, along with her husband, now owns the store. They have two peacocks, male and female, which we all admired. Their daughter Gay, who is about 20, does pen and ink drawings of the area—we bought a pack. They have about 150 acres. Bob talked to Grover Ladd for awhile. His mother took photographs and developed them and he had some to give to the museum. While he was doing this Rebecca and I visited with Mrs. Holland in her kitchen, which she said used to be a cookhouse. Then we went down to look at their pelton wheel just above the river. Bob says the wheel is much larger than they need. They do supply three houses with power though. We looked at their horses—one Appaloosa, and their cow, which is about to calve. Linda and Rebecca were delighted to pet a chicken and a duck, which Gay caught for them. We had eaten lunch at the Denny Campground around 12:30. We left around 4:00 and drove back in our own cars. “

Later in the week we met with some people to talk about possible inclusion of New River in wilderness.