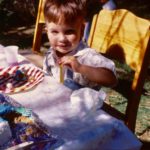 And so it began, life with three children, instead of two. Wouldn’t have traded it for anything except I needed another pair of hands. One of the first examples of this occurred when Clarke was 17 days old and I drove downtown, parking in front of Trinity Market. Groggy and tired, I walked across the street to the “dime store”. I carried Clarke in an infant seat and had the other two hang on to me as we crossed. After making a purchase I walked back to the car, holding each child by one hand. Realized when I got to the car that something (someone) was missing. The other two didn’t say anything. Maybe they thought I knew what I was doing. Oh, no…….Put Rebecca and Jeff in the car and raced back across to the store where I found an older woman cooing and chatting with Clarke where I’d left him, in the infant seat, on a space reserved for cutting material. 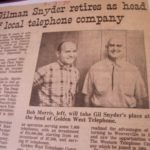 September 1st, Gil Snyder retired from Golden West Telephone Company and Bob became the district manager. The other employees seemed to be happy that it was him and not someone from outside. It was a great opportunity for him but involved a lot of studying and learning new skills. He began to stay after work for a couple of hours every night.

Had a small 3rd birthday party for Jeff, all I could muster three weeks after welcoming a new baby to the family. The theme was toy soldiers and I made a cake that was shaped like one. I think there were two other boys there—John VanDuyn and Forest Hartman—plus Rebecca. 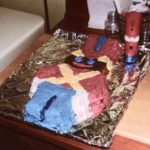 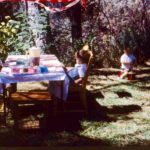 The last weekend in August we had a backhoe dig a ditch for the new waterline coming from the town system and Bob hired some teenagers to help backfill. For one day with a one-week old baby we had no water.

Rebecca started afternoon kindergarten and enjoyed it. She was really tired by the end of the day though as she had been taking naps off and on until then.

I was nursing Clarke but began to supplement with formula—too tired and too busy to produce much milk I guess. When he was about a month old I drove out to the ranch with the three of them. At the top of the hill, when I got out of the VW beetle to unlock the gate, I heard a sssssssssss.
The left rear tire had a tack in it. I had three choices—walk two miles to the house where there was a phone; walk two miles back down to Waldens’ where there was a phone, if they were home; change the tire. Fortunately we had lunch with us. I backed up to where it was level and started changing the tire. Rebecca distributed lunch, gave Clarke a bottle. I got the lug nuts off only by jumping up and down on the bar. I think we continued on up to the house and changed a sprinkler. We got home around 5:00.

After dinner that night I took Rebecca to the wire sculpture exhibit and art show. When we got home, “Jeffrey stood up on the toilet lid, fell off and chipped three teeth, pushing one tooth up into the gum for a way. “

A few days later Bob and I had dinner with the company boss and his pilot at the Lewiston Hotel.

One day in October, when the children and I were out at the ranch, Rebecca got five stings from wasps. Fortunately they didn’t swell much. She had been sitting on an overturned tub on the porch. We ate dinner at Big Bar on the way home and when Clarke was fussy Marlene Town held him while we ate.

The addition was finished but we didn’t want to move the children into there until we had an intercom. Bob ordered a Heathkit one and “I’m stuck with putting it together.” I think it ended up with me putting one together and him doing the other one. He also ordered a soldering iron and I put that together. “It seems to work o.k.” I’d never done anything like that before. “I kind of enjoy the work while I’m doing it but it takes up what little free time I have and this I resent.”

I took Jeff to nursery school for a couple of days to see how he reacted. He got quite tired but loved to go. I thought he might need something special of his own to counteract the combination of Rebecca and Clarke.

Bob and I both began taking classes on Monday nights—his on personnel and mine music.

In mid-October Bob went to Victorville for a week. I went to my music class, leaving Clarke with Florence and getting Kathy Cleaves to stay with the other two.

One evening I took Jeff to the hospital to see whether he needed stitches in his ear lobe. He’d fallen off a chair and hit his ear on the corner of the table. He didn’t. 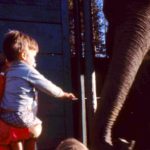 In October there was a small, traveling circus that came to town. There was one elephant, a trapeze performance, trained ponies and trained dogs. We went in the afternoon and Bob joined us for the last half. Rebecca and Jeff got to touch the elephant, which ate Jeffrey’s cotton candy.