On Sunday, the 21st I noted that a few days earlier I had walked up past Bagley’s and taken the left turn over to Garden Gulch where I crossed and went about ½ mile down an old road. I’d left the children at Linda’s. It was a beautiful day although clouding over on the way home. Indian warriors, shooting stars, fawn lilies and houndstongue were in bloom. I found one oak leaf- covered slope along a little creek covered with a mixture of fawn lilies and shooting stars. Saw quail, deer, a jackrabbit and a bird, which I thought was a black-throated gray warbler. Picked up the children from Linda’s and they immediately began fighting. Rebecca stormed off to her room as soon as we got home. “Thank goodness for her room—a refuge!” 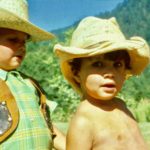 April was a difficult month. Clarke was sick with stomach problems a lot and Brigitte Bayless substituted for me at nursery school a few times. Aunt Nell broke her hip and had to have surgery.

Rebecca spent most of one day at the Myers’. She swung on the rope through the sprinkler, slid in the mud, etc. Clarke and I walked down to meet her and walk home with her. Jeffrey had spent the day with Bob at Big Bar. Originally they were going to be gone just a few hours but Bob called to say that Scoot Miller was working on the road down there so they stayed and got home a little after seven. We had pizza for dinner.

I began painting the old desk that had been sitting on the back porch for two years. Planned to paint it green and then antique it. Kathy Barnes, Don, Chris and Tisa came by to drop off the Ohde’s porta- crib that I’d loaned them the previous year. Bob went to the ranch again and when he got back told Jeff all about what he and Scoot had done. The time spent with his dad the day before was really good for Jeffrey. Bob left the next day for San Francisco and then going on to Bakersfield. He was taking a computer training class. He’d get back Tuesday.

On the evening of the 23rd I wrote that I’d just finished two posters to use for the elementary school open house the next night. They were to help recruit people to assist with a volunteer enrichment program. If parents didn’t volunteer then the school wouldn’t get the $30,000 it wanted. “I’m not sure which is more important to the school, the status of the money or doing something for the kids.” Such cynicism.Jeannie Meyer was in charge of this project, for which I was grateful.

I arranged for two different fieldtrips for the nursery school that week, one to the shoe repair shop and one to the cheese shop.

Rebecca and Jeffrey helped me move the completed desk into the house and it looked “surprisingly well”.

Monday night, instead of getting a last-minute sitter, I took the children to my singing class. “They behaved so well—I was very proud of them. We have a lot of fun in that class and I think that all the laughter, along with the music, helped keep them from getting too bored.”

Bob got home Tuesday night, and Wednesday night he went downriver because Scoot had called to say he’d finished our road, much sooner than expected. It was going to cost $900 instead of $1,225 so now Bob would have more for the culverts, “thank goodness”.

I went to the Behavior Modification class but decided to quit because it was too boring. Bob had to go to San Francisco again for the computer training class but got home the 2nd night. 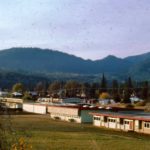 Elementary school from near Lowden Park

The elementary school open house was on a Friday night. The children were quite excited about it and Jeffrey was disappointed that Bob would have to miss it because of getting back later. We were just about to leave, after attending, when Rebecca came up to tell me that Mrs. Rourke said Bob was there. He’d gotten home earlier than expected. We finally tracked him down and Jeffrey was delighted. Rebecca gave him a quick tour of her room and then he went with Jeffrey. Rebecca, Clarke and I went with Doris—Rebecca and Clarke did. I followed them over to the high school where Doris left her car for Dave and Eric who were at a track meet. We gave her a ride home. I had a cup of coffee and we left for home. Bob brought Jeff home and then went over to see his parents.

I was wanting a hiking day but noted that there was correspondence to catch up on, bills to pay, windows to wash and I wanted to get out to the ranch before summer and paint the floors.

“Peter’s name was in the S.F. Chronicle today in connection with some logging that is being done on both sides of a narrow strip of redwoods in the Redwood National Park.”

“Wednesday, May 1st, Bob left for San Francisco again. He left later than he meant to and was driving the stake-sided truck to Redding. He was due to get back Friday afternoon. I took Clarke to Linda’s, ran some errands and then went home to write a Forest Forum letter. I was still trying to run a mile in the backyard now and then, numerous trips back and forth. From there I went over to the elementary school to get Jeff and take him to lunch. Driving down Oregon Street I could see two circles of children over at the school. It was the first grades, including Jeff, holding crepe paper for May Poles (Jeannie Meyer’s idea). I got there in time to watch them going around and to reset the phonograph a couple of times. So the two rooms had a delayed lunch hour. I took Jeffrey down to the Cheese Shop. Bob joined us in a few minutes. “It’s really kind of a nice place. The lunchroom has several tables with matching padded benches and covers, hanging plants and a Winnie the Pooh mural on one wall. Bob and I had avocado, bean sprout and cream cheese sandwiches; Jeffrey cheese and pastrami. Bob dropped Jeffrey off at school. I went home and then went back to the school and worked in the library with some of the children from Rebecca’s class.”

After school Rebecca left a May basket for Florence and Leonard and gave Linda a walnut shell stuffed with cotton with a flower lying across it. Jeff, when he got home from school, wanted to leave a May basket at Kelly’s, which he did, knocking on the door and then running as Mr. Kelly came to the door.

After we picked up Clarke from Linda’s, Rebecca and I scrubbed on the old desk that Florence had given her. Florence and I got it out of their barn and cleaned it up some and I brought it home Monday. A Mr. Drinkwater had made it for a Van Matre who would have been 90 in 1974. It had a hinged top and a hole for an inkwell. But it needed sanding and painting very badly. Florence had a 100-year-old chair she was going to get fixed to go with it. The desk was even made with square nails! 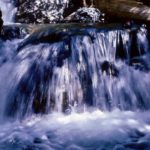 Bob called and said his hurried departure had not been necessary. What he thought was his airplane departure time was actually the time he had needed to leave Weaverville.

May 14th was the next time I’d written. The previous Friday I’d gone out to the ranch with our dog and painted the upstairs floor, the stairs, and the kitchen and dining areas. It was very pretty out there.

The following Monday I was able to take a walk. Clarke had been sick again and Brigitte had worked for me. But Monday I walked. The oak trees were leafed out, carpets of green grass beneath them with pussy ears seeming to float on the grass. Brushed two ticks off after sitting down for a while.

On Saturday Rebecca went to Pearl Gott’s for a piano practice session and then over to Florence and Leonard’s. Robin Meyer went also as I had promised Jeannie I’d take care of her while they took Ann Marie to Redding for surgery. Then the girls went to the convalescent hospital so Rebecca and others of Pearl Gott’s students could play music for them. They went to a Historical Society meeting with Florence and Leonard that night and to Kathleen’s recital.

Eric Ohde drove out to the beginning of our road Saturday and rode up to the ranch with Bob and Jeffrey. Clarke, the dog and I arrived about an hour later. We ate lunch about 2:30. Eric worked on the garden all afternoon, wiring the fence together, taking it down and rototillering the garden. I finished painting the downstairs floor. Bob did some measuring for culverts. We fed Eric and Bob took him back to his car while I got the boys to bed and washed the dishes by candlelight as we were trying to conserve gas. Sunday was chilly and windy. I mowed the lawn and part of the orchard while Bob worked down at the bridge site. After lunch we packed and drove down to the creek where I helped Bob for about an hour surveying. I kept hearing what sounded like young water ouzels and I discovered a nest under the bridge. It was made of moss and sat on a loose piece of bark hanging from a log. There appeared to be three young ones. I tried to get some pictures by standing in the stream but it was pretty dark. The parent birds were quite busy hauling food but wouldn’t feed them with anyone down there. I took the boys closer to see the nest too. 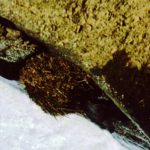 We got to town about 5:30. Unloaded, changed clothes (mine and the boys) and then went to Florence and Leonard’s. From there, in two cars, we all drove out to Cedar Stock for dinner. The dogwood on the way out was spectacular. Mother’s Day I guess?