This seems to have been a year of struggling with family, self and place. Lots of inner turmoil. I mentioned that I loved my family so much—so glad to see Clarke mostly well again with his smiling bubbly self; Jeff’s secret jokes; Rebecca’s profile as she played the piano—but wanted more time to myself, not being on call constantly. I suppose a not uncommon complaint from mothers of young children. And I was wishing my mother not incapacitated from a stroke and able to tell me more about her life at this age. I was feeling a lot of pressure to be fully employed to help out with all the expenses of the ranch; while, at the same time, I could barely keep ahead of what I was already doing, including caring for sick children. and was looking forward to at least one year with all of them being in school. 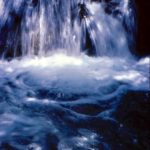 “Bob’s getting interested in all the research being done on ESP.”

I’d made a date with Bob a month before to eat dinner in Redding and stay overnight after seeing Cosi Van Tutti. He didn’t think he was going to be able to go because he had a meeting in Bakersfield. But we made it. The children stayed with Linda Lindsey and I drove to Redding where I met him at the airport. We checked into the Royal Inn, ate dinner and went to the Civic Auditorium. The next day we explored a salvage yard and wandered through the mall before going home.

That Sunday I took the kids to the park so Bob could have peace and quiet to work on taxes. They didn’t want to play there so we went down to the millpond and walked around. There were cattails splitting open with big spirals of feathery seeds spilling out. The children were shaking them and blowing on them as if they were large dandelions. There were some ducks on the pond. We walked over and looked inside the little doors at the bottom of the teepee burner. Didn’t look as if it had been used in quite a while. There were some piles of rocks inside.

Florence and Leonard brought back gifts for the children from their trip to Mexico: a big sombrero for Jeffrey, a small one for Clarke, sandals for Rebecca and Mexican coffee for me. Florence brought back lots of shells, all perfect, sacks of them. She said there were miles of beaches with no one on them.

I had a day of laryngitis and wrote that Clarke was acting out, probably frustrated with having a mom who could only whisper as well as having had no nap. Bob called from a Bureau of Reclamation meeting in Weaverville at 7:30 and I assumed he was still dinner-less at 11 p.m., still at the meeting. 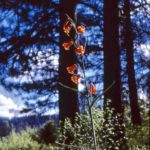 I was searching for a place to put my Community Concert posters and relieved that Frank and Pat Hicks were willing to put them up at the drug store.

On the 23rd of February we took the disk and slid in the snow down between the trees from the upper driveway. Had a lot of fun as it was sunny and warm. We stopped when everyone got too wet.

Bob hiked out to the ranch that afternoon to take pictures of the washout. That night we discovered that the film canister hadn’t been turning so there were no pictures.

Bob and I went to a Forest Forum meeting where Eric Ohde gave a talk and showed slides of his Alaska trip. Beautiful photographs and he did a good job. There were only 14 people there though.

Diana Sheen and I went to Redding to the behavior modification class. We’d been having snow off an on all week. That Tuesday we made homemade ice cream at nursery school, using snow instead of ice. Wednesday I showed slides of volcanoes, mostly Crater Lake, to Rebecca’s class. It took me two hours to select the slides and I was 5 minutes late to class. “The kids seemed to enjoy it. Not sure about Rebecca though; think she has mixed feelings, may make her feel a little conspicuous. Not too much I hope.“

Bob was gone all the next week at a conference in San Francisco. The Sunday after he got back he put up a wall dividing his shop into two rooms so Rebecca would have her own bedroom and he would have an office. She was delighted. Jeffrey got the top bunk and Clarke moved from his little bed to the bottom bunk. The big worktable became our dining table and the other one was moved into the boys’ room. I got plastic dishpans for the boys to put their toys in on the shelf under the table.

Nursery school that week was loud and busy but went pretty well. They made French toast for lunch. And the adult meeting had been productive. We’d had lots of discussion on policy, goals, etc.

Children were getting over some bug—Rebecca had had a high fever and was still on medication though back in school. Jeffrey had had a croupy cough. I was feeling sorry for myself again! But the next day cheered me up.

March 17th I went skiing with Jeannie Meyer, Anne Marie and Rebecca. We left Weaverville at 6:30 and stopped at Castella to see the Hurds and pick up Kathleen Morris who was there with Ruth and Vernon and Florence and Leonard. “When we got to Mt. Shasta we rented skis, poles and boots for Rebecca. We had a very good day. Rebecca had a lesson first thing. I went on the new lift, which is just right for my abilities. Went on the big lift twice, the last time a total disaster with many falls and too much fatigue.“

“It was a beautiful sunny day and we came home sunburned. Florence and Leonard and the Ryans had come up to the ski lift to eat lunch. We took Kathleen back to Castella. Near Dunsmuir, right below the high school, Foreros were parked beside the road with car trouble. We stayed there until a tow truck came and hauled them to the garage. They passed us on the way home. We got home around 11 pm.”

Bob, Horace Jones and I went to Hayfork to a Forest Forum meeting. At some point while we were there Lee Van Zee and I got into an argument about schools with the new district ranger’s wife—“wasn’t too great”.

I rode my bike over to the elementary school to help in Rebecca’s class and afterwards was able to ride clear up to the bottom of our driveway without stopping. “Was really out of breath when I got to the top of the hill” near Young’s. 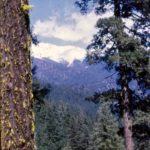 March 26th I took a 2-hour and 15 minute “marathon hike” up to Glennison Gap and back. Took the dog who chased two deer and flushed a pair of mountain quail. “Got furious with her.” Rebecca and
Jeffrey were home for about half an hour before I got back. That weekend Jeffrey got sick and the other two did also over a period of several days. Bob made another trip to Bakersfield for a couple of days. Bridgett Bayless substituted for me at nursery school.

I was still struggling to balance all that life brought. One evening, after he got back from his trip, Bob put on some music he knew I liked– Austrian music and Irish. He started dancing around with the children and we all ended up dancing in a circle. Everyone was so happy, light-hearted and loving. “It made me think of some of the noisy, fun and laughing things that I remember growing up in our house as a child and teenager.” The next day I ended up, at the end of the day, tense and irritable. “Everyone seems happiest when I’m being domestic.” And sometimes being domestic was enjoyable. But trying to focus on other things was more difficult. I sent everyone outside with raincoats and boots to walk around in the wet for a few minutes.

The first week in April I put sizing on the walls in Rebecca’s room and Fred Varney and Florence came up to put wallpaper on. It really looked nice. Fred had to do the dipping in the bathtub though. The paper had a background of white and yellow squares with cats and birds on it—really wild. That night Florence and Leonard brought up a rug for the room that Florence had patched that morning—all different heights and textures.

Around 1:00 that Sunday the children and I went to Big Bar with Bob following in his car. We ate the picnic lunch I’d fixed and then Bob went on down to join Scoot Miller on our road. We were at White’s Bar picnic area. The children played in the sand and seemed to have a good time. The river was high and muddy with waves lapping at the shore, as if it were a lake. We stayed there until about 4:00 and then went down to Prairie Creek and walked up to where Bob was working on the road above Walden’s. Scoot had left the cat there as it was too wet to do any more work. The children and I left and went to Big Bar Station for dinner—hot dog and lemonade for Clarke; chicken, potato salad and milk for Rebecca; grilled cheese sandwich, French fries and root beer for Jeff; soup, salad and coffee for me. Bob came in, having driven by but seeing us in time. He had salad, milk and half of Jeffrey’s sandwich. 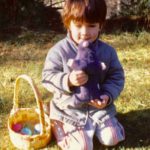 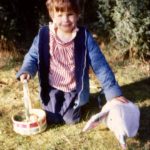 The next week, following some more illnesses, was Easter and everyone was well. We had our egg hunt, with Rebecca staying up late the night before to help with decorating for the first time. Later we went over to Florence and Leonard’s for their family hunt with Nancy and David Adrian and family. 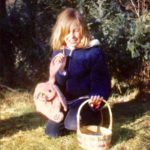 Clarke got sick again. But I did take a first aid class during Easter vacation. Monday, Tuesday, Wednesday and Thursday nights 6:30-10:00 and Saturday morning from 8:30 to 12:30. It was being given through the fire department. A man from San Diego taught the class and really did a good job of practical training but every other paragraph was a dirty joke—most oriented toward the female body. I wanted to leave the first night except I really felt I needed the class. I ended up writing him a letter about it but threw it in the fireplace. Saturday, after the class, I went home and fished it out again, at Bob’s suggestion, took it back to the fire station and gave it to him.

Spring flowers were blooming–pussy ears, the pear tree on the corner of the driveway; redbud was about to bloom– shooting stars and fawn lilies were flowering along Oregon street.