“Michael Barnes fell off the bars last Thursday and broke both bones in his left arm. I really felt badly about it. Am getting super cautious with the kids now.” Nursery school. 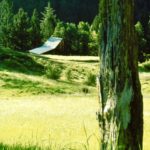 On the 15th I left Clarke with Linda and drove out to the ranch with Doris Ohde. We followed a phone company truck in. He was on his way out when we reached the washout turn. We ate lunch on the lawn and then I drove down to the creek. Doris wanted to walk so she did. I went under the bridge with the camera and took a number of flash pictures of the water ouzels. The parents fed them a number of times. Just the female was feeding them while I was there but when Doris came down we saw the male feeding them as well. The parents seldom flew directly to the nest, almost always lighting on a rock beneath or several rocks away and then working their way up to it. They fed the young by hovering in front of the nest. I didn’t know whether this would be the case if the nest were in a different location. “What amazed me was how the adults could get yet another grub in their beaks without dropping what was already there.” They seemed to need to dip their beaks, with load, into the water fairly frequently.

We’d been having cold, blustery days and frost several times. One day it actually snowed for a few minutes.

One Saturday “we left the boys home with Linda Ohde as a sitter and drove downriver to see Oliver Berglund, who lives across the river and up the hill. He was waiting on this side of the river for us. We crossed on a cable car, sliding across above the jade-green water. There’s a little motor on the car plus a crank so it can be turned by hand also. Rebecca was pretty nervous about going across but handled it quite well. Oliver has a big, beautiful German Shepherd named Storm- not at all the usual nervous variety of shepherd. He has a compact little cabin right on the river by the far end of the cable car and this year has planted a garden there in the river silt. He told us that this last January the water was just inches below the cable car and a hundred foot long log coming down, with a huge root system, just missed him when he was crossing.

We rode in his jeep up to his house. The road is narrow, no wider than he needs for his jeep. It goes up through the trees, winds around the hill for a way, then dips down to what he called his primitive house. The house is an A-frame with extra cupolas frames here and there for extra windows so that every room has a window. He split his own shakes for the roof. Window boxes, painted bright orange, are in front of the lower windows and filled with bright flowers. Rock walls meld the building into the ground.

Inside, it’s quite compact and comfortable, many books, TV, phonograph and electric organ. He has a gas refrigerator, uses a gas generator. This is why he wanted Bob up there—to see if he could feasibly use a pelton wheel. Outside there are bird houses all over—on the house, on trees, etc., many made out of short pieces of tree trunks. The place is swarming with birds–Steller’s jays, hummingbirds, juncos, robins, swallows. He has two hummingbird feeders and a bird feeder for winter use that revolves with the direction of the wind. I also saw quail and chipmunks.

He has bears, deer and raccoons around. He built a pool in the rocks where he keeps trout from the river and can eat some once in a while. The house sits on a cliff top overlooking the highway and river and his property includes a lot of old mine works.

We walked up to his water source on Panther Creek, following ditch grade a good part of the way, a couple of miles, a beautiful walk. Everything mossy. Found lots of Bochniakia growing, I guess on madrone roots. This plant looks like a pinecone. It has no green leaves but does have flowers that bloom in the spring in the bracts, which are reddish brown to dark purplish. The moss near the creek was so thick, like a sponge.

When we got back to the house, Oliver cooked a lunch for us, even though we’d brought a lunch. We sat at his table outside as the wind blew and clouds scudded by. Rebecca and I did some more exploring during the afternoon while he and Bob did their calculations. We left around 5 o’clock. It was a very interesting day and I feel as if I’ve found a kindred spirit in Oliver Berglund up there with his books, and birds and solitude.“ No photos of his place—would have seemed rude. 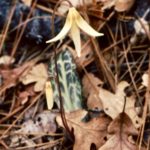 The next day I went over to Florence and Leonard’s and filled up a garbage can full of horse manure. Bob left around nine with Eric to go to the ranch. We didn’t get away until 11:30. We ate lunch at the creek. Bob and Eric worked down there all day. I raked the garden and spread the fertilizer, which took a couple of hours. Used up the last bit of gas in the mower by mowing. Saved enough branches off the big apple tree from the ground so that I could drag the rest to the brush pile. We left around 5. I showed Rebecca the water ouzel’s nest. Both parents fed the young in the few minutes that we were there. 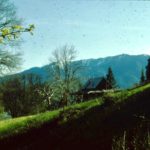 On May 24th I took Jeffrey and Clarke to Shasta College to see Robin Hood, leaving town around 9:30. Rebecca’s class had gone Monday. It was outside in the amphitheater and was very hot. Fortunately Lee Hanlon had told me it would be and I took an ice chest with packages of ice. The boys ate the ice and drank the water. The program was active and colorful, which helped. Jeffrey took a picture of Robin Hood afterwards. We ate lunch on the campus lawn in front of the Little Theater and got home round 2:30. Rebecca had gone to Florence’s after school so we went to pick her up and then to get groceries.

Clarke had suddenly gotten sick Tuesday and I was really lucky that Doreen McClurg was able to substitute for me at nursery school at the last minuite. Bob left for Bakersfield that day and got back on the 24th, a Friday.

Wednesday morning Linda Lindsey had called to say she was going to take some posters for the Barn out to Trinity Center and would Clarke like to go. They left at 9:30 and rather than wash windows I packed a lunch, finished the dishes and drove over to the trail to take a hike. I found a spot near the creek. I had a hummingbird hover right in front of me and saw a chipping sparrow preening in the top of an oak;and a dark gray lizard, the color of the pile of old mine tailings which were apparently its territory. It was really restful. Then went home and went over to help out with Rebecca’s class.

Thursday we took the nursery school children to the B-Bar-K Ranch. They had a good time. Clarke seemed to enjoy everything—swinging on the rope in the barn, trying to milk a pregnant cow (which shocked some of the children by having normal body functions!). They ate lunch out in the field and played in the sand afterwards.