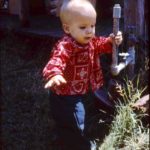 The refrigerator had been smelling really bad for awhile. Bob cleaned the vent and searched for the problem. He replaced the burner and put a spring in the pilot that had fallen out. One evening, a few days later, we found behind the refrigerator, behind the casing, a large mouse nest and on the floor about three dehydrated mice.

We must have taken the vacuum cleaner out to the ranch because I wrote of vacuuming upstairs (much better than sweeping, which simply filled the cracks between the boards). That day, after vacuuming, I sat on the back porch visiting with Rebecca and drinking a cup of coffee while “we admired our fine, fat, friendly alligator lizard” that lived out there.

Virgil DeLapp began working on the addition to the Weaverville house. By the 10th it was ready to have foundations poured. By the 14th the rafters were up. By the 22nd there was a roof!

August 8th we were awake most of the night because of a violent thunderstorm. The children slept through it. There were strikes all around us. We got up earlier than usual so Bob would have time to kick rocks out of the road on his way to work. We were sure there would be many because of the hard rain that came with the storm. After the fog cleared off I thought I could see smoke on the Prairie Creek/Trinity River side of the Knob. I called the Forest Service at Big Bar and Bob Johnson said Doris and the plane had called it in. He said that, up to that point, they had about 15 fires– one on Swede Creek, one up near Twin Sisters, etc. 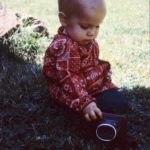 Here’s a busy day: “ two batches of laundry; baked five dozen oatmeal cookies; did an hour’s rockwork after children went down for naps; chopped wood; folded and put away yesterday’s laundry and then today’s; called around to find another sitter for tomorrow– got Cheryl; mopped the downstairs floor; did some mending.” Bob called to say he’d eat in town because he had to fix the mobile system He got home around 9:45 about 15 minutes after someone called to say he was shipping some parts Bob had ordered.

We went to Cathy Marshall’s wedding reception. I met some new people and drank too much champagne. We talked with Alice and Horace Jones about their recent trip to Yosemite. Dick was growing a mustache. I enjoyed talking to Agnes Marshall. Later we went to Varney’s for ice cream, cold drinks, etc. The Austins were there with friends and Judge Paulsen came in. Then back to the ranch to pick strawberries, blackberries, feed and bathe children.

The next day Bob did about six feet of the rockwork and put the back panel on the sink. I did my usual chores and also cleaned out the bathtub-settling tank (for our water). It was a good thing I did that because there was a dead lizard in it; also hellgrammites, some attached to the lizard. And there was a leech type thing about two-inches long with a suction cup on one end that was attached to the tub.

That afternoon a friend from college called from Weaverville. I drove to Big Bar and got ingredients for ice cream and a few other things, then waited for them at Prairie Creek to guide them up our road. Pat and her husband and three children stayed for dinner and left around 8:00 pm.

“Rebecca likes to climb up the ladder when I’m picking apples. Quite fearless about it. She picks one or two that she can reach and then sits on the smaller ladder munching while I pick from the taller one. “

Bob Johnson came out one night about 9:30. He said Doris Ohe had seen the light Bob had out on the porch when he was working on the sink project . Our walking back and forth in front of it made it seem to flicker like a fire and she asked whether he could investigate. They had called and the phone had rung about 15 times he said but we hadn’t heard it. We talked for awhile and then he called Doris on the radio to let her know we were OK.

One Friday Bob flew to Garberville with his boss, Gil Snyder, I assume in Gil’s plane. When they landed on their return trip the wind gusts in Weaverville were so strong that the plane bounced several times.

I started sewing on a little backpack for Rebecca to carry her dolls. Jeff swallowed some aluminum. Bob braced the generator shed and put metal roofing on it. Rebecca got sick with a temperature. We had rain and I draped drying diapers all over the house. Jeff pulled the little shelf upstairs over on himself (small bookcase size). He got a cut under one eye. I had a benign fibroid tumor removed—Dr. Polka chewed gum during the whole procedure. Much worry and stress before and after until results were finally sent to him after a week. Fibroid. Relief.

There was some snow on Weaver Bally after the last storm and six inches on Granite Peak.

Jeff’s first birthday arrived and Rebecca helped fix the cake, a few cupcakes and a tiny cake in her small cake pan. 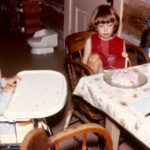 Quite often I’d bring fruit or vegetables into town to share: apples, peaches, green beans. We were getting ready for a horse packing trip and were going to leave Rebecca and Jeff at Austin’s and be gone almost a week so I tried to do some harvesting ahead of time. We were going to go with Florence, Leonard, and Vernon Ryan.