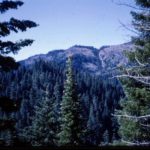 The next few stories are going to be about our horse trip into the New River area so I hope my readers enjoy camping trips in the mountains. I’m mostly just copying my journal and re-living the trip in the process. I have slides but most aren’t labeled so I’ll be putting them in randomly. Maybe someone will recognize different places. Unlike my traveling companions I had no experience with horses. I was assigned a gentle horse who hadn’t been ridden much in recent years and probably needed to lose some weight but she wasn’t going to be a discipline problem. It turned out that she had a bad habit though. She would lag behind the others and then trot to catch up. I think Bob took most of the pictures.

We left the children with Barbara and Jim Austen and on September 1st Leonard, Florence, Vernon and I rode in the truck pulling a trailer. Ginger, Ed, and Daphne were in the truck and Topsy and Cholla in the trailer. Bob followed in our jeep, pulling Milkshake and Target in a trailer. When we got to Salyer, Bob, Dave and Chuck weren’t behind us so Leonard and Vernon went back and found them near Mary Carpenter’s—a trailer wheel had sheared bolts and nearly come off—5 more minutes and it would have been off. Bill Jackson had a trailer available so they went to get it. Florence and I stayed at the Salyer store.

We finally got started again only to have the fuel pump on the big truck lose a pin. Bob got it fixed and about a quarter mile further it happened again. We ate lunch at Grizzly Camp and weren’t on the trail until quarter to four. On the trail Vernon went first on Cholla, leading Target; Leonard on Ginger, leading Daphne; Florence on Ed, me on Topsy and Bob on Milkshake. Beautiful country: large Douglas fir, red fir, bracken, and hazel nut bushes. We stopped at 5:30 at Lipp’s Camp. Tall firs around a little green meadow. There was a rocked-in spring which we reached by dropping a bucket with a rope. Steak for dinner—tender and delicious. There was an old miner’s lean-to cabin nearby.

Monday we left camp at 9:45. It was a beautiful trail today. We went through forests of very large Douglas fir, some 8-10 feet in diameter. This was quite alpine appearing country—green meadows, cone-shaped red fir, with branches clear to the ground. We also ran across a couple of hornets’ nests and the horses got skittery. I really had to hold onto Topsy’s saddle horn! We ate lunch at a little stream; sat on a log alongside, about half a mile before Eight Mile Creek. We had to stop several times to re-arrange packs.

Along the way we passed several jeep roads leading to mining claims and also had to lead the horses across a large slide area. There were elderberries and dogwood with berries along the trail. At one spot Bob said he thought we could see the ocean off to the west. At another we could see Mt. Shasta and could look down on a little pond, partially filled with weeds. A large pond, where we watered the horses, had many water dogs (rough-skinned newts).

We stopped about 6:00 o’clock at Summit Mine and set up camp right by the trail. Vegetation was brush and fir. There was trouble with Milkshake. Both he and Target have a crush on Ginger and Milkshake got so tangled around a tree trying to follow her that they had to cut the rope. 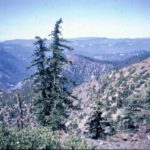 This camp has a lot of old iron parts for mining equipment that were hauled in by horses or mules, including the remains of a ball mill. The spring here is small, about 200 feet from camp and comes from an old mine shaft, which has partially caved in. Florence and Leonard said that when they were here 15 years ago there was a cabin here and some men working.

I was really tired from lack of sleep and had sore muscles. My knees got especially stiff (Topsy was quite round).

Tuesday, after lunch, Target and Daphne had to be re-packed. We were sitting on a rocky point that had cedar, Douglas fir, knobcone pine, ponderosa pine and sugar pine on it. There were lots of small, brightly colored rocks with shades of green from yellow to dark. Much of the trail that morning was narrow with loose shale and steep mountainside above and below. There was a metallic clinking of hoofs and clatter of small rocks bouncing down the hill. It was nerve wracking. We also had to watch for holes in the trail. There were a couple of tricky crossings. On one steep dirt gulch Daphne’s lead rope dropped and she went up by herself. The other crossing was a creek with slippery rocks. At another point Chollo took a shortcut and Target had to follow up through brush on a steep side.

Vernon is fun on trips because he’s so full of stories. 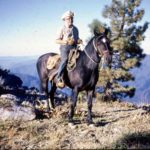 Wednesday—Lying in my sleeping bag at Mary Blaine Camp. The sun hasn’t come up yet. There’s a golden glow beyond the Alps. We got here yesterday about 4:30 after more long stretches of shale slides. I couldn’t see how the horses kept on the trail. This is the most dramatic camp so far– to the east, the Alps with Thurston Peak; to the north at least eight ridges, including South Fork Ridge.

The camp is among red firs. There’s a small table between trees, dish towels on barbed wire, open rock stove and little tin stove with a stack, which we’re using to cook. Water comes from a spring in a little meadow just below us. It’s enclosed in a piece of culvert and we share it with the horses. To the far left, looking east, is a large meadow running clear to the top of the ridge. Vernon took the horses over there to feed and then brought them back. 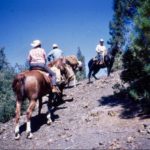 We had our drink (highball) right after getting here yesterday. Really a tired crew I think. Bob and I went down to the spring and washed thoroughly after dinner. Vernon and Leonard took the horses over to the meadow. Florence bathed. Bob and I fixed our sleeping bag sites and I washed the dishes. There was a nearly full moon last night. So pretty.

There is so much country around here—it’s just big. We’d like to come through some time just walking, with Daphne—through part of it anyway, to take more time. People are beginning to stir. It’s 6:15 Big carpenter ants are in bed with me.