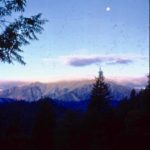 I’m enjoying reading this history and am sometimes amused at my younger self as well as being amazed that we did so much during this time. In this latest installment I can see some of the patterns: care and maintenance of things at the ranch—trying to get started on putting a rock foundation under the edges of the porch; taking care of the vegetable garden; cutting firewood; picking apples and making applesauce; making jelly from the gooseberries found in the woods; finishing the sink cabinets and counter; visiting with friends and relatives; observing wildlife at the ranch; working on putting an addition on the house in Weaverville; keeping automobiles repaired.

I don’t remember where this gate was supposed to go but Bob dug some holes and put pipe poles and cement in them. “He made Rebecca’s handprint, name and date and Jeffrey’s footprints and name. It will be buried under dirt (about six inches) but still the names are there.” The gate was going to be made from a large wheel from a hay rake.

I found a lizard hanging by its front feet from the clothesline when I started to hang out the laundry. It was about five feet from the porch. I took some pictures and then we helped it to solid ground. We weren’t sure how it got there, perhaps dropped by a bird or maybe it slid off the metal roof. On that same day I pushed a wheelbarrow of manure up from the barn, with Jeff on my back, and spread it around the garden. 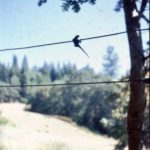 On the 4th of July we went out to the Morris cabin at Canyon Creek. Nancy and David Adrian and children were there, Pete and Mildred Hurd and their family, Ruth and Vernon Ryan. Children got along well. Rebecca spent a lot of time throwing a stick for Vernon’s dog, Sport. Dinner was potluck and there was homemade ice cream. We got home around 11 pm.

It was very hot during this time with thunderheads. I varnished the kitchen cabinet again. That weekend Bob “planted” three more poles. I cleared debris out of the ditch so the trees could get water. We went down to White’s Bar picnic area where Rebecca loved the sand and Jeff ate it; we took turns watching kids and swimming.

I was trying to go for a quick walk in the evenings after dishes, picking up, etc. It was usually after 9:00—mosquitoes were thick but it was cool and when I got up past the lower spring I couldn’t hear the generator. There was a moon too, which was nice.

“We’ve been having peas and lettuce fresh from the garden. I give Rebecca her peas raw, in the pod and she thinks this is wonderful!”

Jeff started crawling instead of scooting on his stomach. July 8: “A sonic boom made Rebecca scream today. I hate those things. Can’t see why our quality of living should be reduced, and the quality of wilderness just because we don’t come in large quantities of votes”. 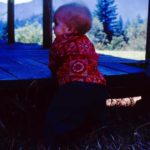 We had a doe with a tiny fawn appear now and then. When we went for walks we always had to take time to sit on the pelton wheel and on some “sitting logs” along the way.

From hot, the temperatures it went to chilly and we had fog some mornings. I started picking apples and making applesauce. “One night Rebecca needed to use the outhouse at 1:30 a.m. and we watched the last moon sliver rising. It lighted the upper part of the meadow before we could see it but a handful of trees on the east ridge were like golden, tree-shaped lanterns. The tip of the moon shown through them and finally above.”

July 22nd I fixed dinner for my brother Peter and his family and for Florence, Leonard and Robin (the latter three just having gotten back from a pack trip). After that dinner Bob brought Kathy Smith to baby sit (“Rebecca was not pleased”) and we went to the Joneses where Alice and Horace were having an open-house reception for their son Dixon and wife Heather. We spent a lot of time talking to Jinx and Dick Fores.

July 24th “ Put new contact paper (used like wallpaper) in the outhouse; did 2 batches of laundry; played “lid” with Rebecca (not sure what that was); weeded a little in the garden; watched one of the caterpillars peel its skin off and become a chrysalis—this was after about 12 hours of hanging head down. Rebecca watched too and was most interested. We missed seeing the 2nd one but saw it just a few minutes afterwards. “ Those monarch butterfly chrysalises are beautiful, a jade green. We were getting lettuce and squash from the garden.

And then I was doing some soul searching–“Have been doing some thinking today about who I am, what I want, where I’m going, etc. Thought I finished that after college! But my position is so different now.”

Another trip to the outhouse adventure–“Last night at 2:30 a.m. Rebecca and I heard apples dropping from the apple tree by the generator. We looked this morning and found porcupine quills, one on the tree and one at the base. I wrapped heavy-duty aluminum foil around the tree but don’t know if that will help.”

Bob put 2 x 6s under the edge of the porch at the ranch to go between the present stringers and the concrete foundations. In town he put our intake pipe on floats in the middle of the reservoir, hoping we won’t run out of water again.

We heard about a man who had abducted a couple and was loose down near Del Loma, which made us a little nervous. but in a call to the Sheriff’s office we learned they had caught him.

July 30th I left the children with Austens and took the VW to Redding to get the broken window replaced (we weren’t sure how or why it broke a couple of weeks ago) and to get the dented fender repaired. I left it at Bingham Motors and walked downtown. Had a doughnut and coffee and window-shopped. I tried to buy some pocketbooks (paperbacks) but couldn’t get a check cashed. Went to Gerimonte’s (they used to have a clothing store in Dunsmuir when my family lived at Castle Crags) and one of the Gerimonte brothers recognized me and “was most cordial”. He offered to be a reference for any future check cashing. I think he probably recognized my middle name of Twight rather than me. I had a waffle and iced tea for lunch and then walked to the Hislops (I stayed with them during the week when I went to Shasta College my freshman year), across from what was then the junior college on 299. It was very hot. Fortunately Marge was home and we chatted for awhile. She took me to the VW place at 3:00 when the car was ready.

Back in Weaverville that night we had dinner with the Fores. “”We had a good time although there was too much women talking to women and men to men to suit me. Conversation is more interesting mixed. Took them some squash and cabbage which I picked by flashlight last night.”

Our butterflies hatched. Rebecca was delighted and wanted to hold them on her finger for forever. 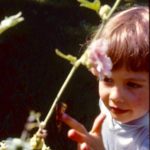 And a rant–“Bob brought home (to the ranch) our TV set tonight. Now we have even more wires across the ceiling and one going out the window across the south porch to a brass colored antenna . Our ceiling looks as if some gigantic spider had started to make a web and then changed its mind. The antenna, I discovered this morning, protrudes in front of the upstairs window between my morning view of Eagle Rock (taken automatically at the top of the stairs before coming down to fix breakfast) and the house. He says he’ll take it back after the conventions and I sure hope so. Last night Nixon was talking and I was trying to read the paper but felt I should listen to him and so did neither very well. It was another no-nap day for Rebecca and those are particularly exhausting with the constant chatter. I don’t mind the music on the radio but TV is nothing but noise. Bob feels that watching will help him decide on candidates but I wonder if reading about them wouldn’t be the same.

Some put on a good act on TV and others, like Nixon, have a difficult time putting on a good show. What we really need to know is their policies and how they think about things. I guess TV will help but to me it’s almost a sacrilege to have it out here. The ranch is pretty special—TV is ok in Weaverville and I enjoy it but it just doesn’t belong here.

Maybe it’s like my evening walks—that precious 10-20 minutes when I can be completely by myself, finding a little bit of me that has been splintered into mother, wife, housekeeper, gardener, etc. all day.”

Bob had been working on the sink. We had yellow edging around it and then cut and placed the top. The packing box for the sink top was about five feet high and 2 ½ feet across with the opening at the top. I suggested cutting a door and window in it. Rebecca loved it. That night she wanted to sleep in it on the porch so for an hour and a-half she and five or six dolls and stuffed animals squirmed and wiggled and came into the house for various reasons. At 9 o’clock I made her go to bed.

That afternoon when she had been in the box and was screaming I asked her to stop. She said, “I can scream in my own house!” Point won.