Sometimes being up a beautiful canyon, four miles from the nearest neighbor, had a down side. One day in mid-June, around 1:00, I had a phone call from Frank Walden saying that Maureen had seen five motorcycles going up our road past their place. I locked the doors and called Bob when I could hear them. My being upset got Rebecca upset and that wasn’t a good thing. I later chastised myself for showing my nervousness. They didn’t go past us but perhaps had gone up the old road and gotten above some way. I called Maureen and she said they hadn’t come down. Around six Bob called from Big Bar and said that five people were loading motorcycles into a truck at Big Bar. They must have had trouble with one because of it taking so long for them to return to the highway. It was raining a little and not really good for riding. 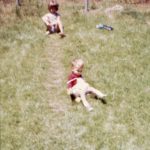 In town again for a couple of days, Bob brought home his five-year anniversary pin (with the phone company) and the matching necklace for me. I started sawing plywood to make a stove for Rebecca. Bob dug all the dirt off the top of the septic tank. I took the children and went to the Laundromat. Washed all the towels from the Weaverville house. We headed back to the ranch that evening and ate dinner at Big Bar at the Towne’s restaurant. The children seemed happy to be back there, rolling down the lawn and playing on the porch.

Rebecca was reading now and I noted that she seemed really tired and I was going to have to limit her to just two books in bed at naptime and at bedtime. “She is really such a pleasure most of the time—is getting an occasional insight, has a clever sense of humor.” Jeff was starting to supply the final word of lines of several songs and of the Hop on Pop book. He was also beginning to put two words together at a time like “daddy’s shoe”.

I was reading a book called “Death at an Early Age” about African American ghetto schools in Boston.

We moved a treadle sewing machine out to the ranch and I was able to do some sewing with it. Nice to be able to do that without starting up the generator.

The children liked to coast down the slope of the lawn on the kiddie car and a little Playschool wagon.
One day while they were napping I painted the window frame on the fenced porch as well as the doorframe. We used a quick-drying latex paint on the floors and I’d paint the floors off and on during the summer.

There was a maple tree along the road below the barn, that leaned out at almost a right angle, that Rebecca liked to climb. We’d walk down the road so she could do that and I’d coax Jeff to walk back.

One morning Rebecca helped me make a pineapple upside-down cake. It looked and smelled so good after we baked it that we each had a small piece. And had another piece with lunch and more with dinner that night. “Jeffrey calls it an up-down cake.”

To celebrate Gilda and Sandy Sanders’ 25th wedding anniversary there was a gathering at Cedar Stock Resort. We took the children to Florence and Leonard’s so we could attend.

Bob worked on the ceiling in the addition the next day and I got chard and more raspberries from Florence. Froze some of the berries and took some out to the ranch. Grasshoppers and leaf-hoppers were chewing away on the cucumbers and other vegetables in our garden.

One evening, after work, we all went to Colleen’s so I could purchase a dress. I don’t remember this or the occasion for which it was purchased but I was trying to be sure I got something Bob would like. “It’s bright yellow with a shocking pink trim and white daisies’– about three on the front and one on each sleeve, with pink centers. About ¾ length sleeves. Very bright! I had a preconceived idea of something more of a white or blue sheath, which this definitely wasn’t but also want to wear clothes Bob likes. I buy so few dresses I’m not really sure how his taste runs—he was making much more conservative choices till he saw this one. Anyhow, I’m happy to have it.”

During a 3-hour children’s nap I made a half recipe of fudge, weeded in the garden, hauled some 2 x 4s up from the barn so I could fix a prop for the peach tree, cut a lot more grass around the edge of the lawn, took down the laundry. I’d called Trinity Gas that morning and they said they’d bring gas the next day—not exactly willingly. Bob usually called before he left town but didn’t that day. Our phone had gone out. After naps the children played in the small plastic pool. Jeff “practically rolled” in the water –“had more fun!”

We started having our morning snacks out on the back porch in a patch of sun. The children would eat and talk. I read and talked. “Very pleasant”.

The phone was working again and that evening Bob called and said he had a chance to get a load of wood for free out at Minersville so ate in town, drove out to get the wood, and called at nine to say he was on his way home.

On the 4th of July, before the parade, we bought (50 cents) a big, yellow, helium-filled balloon from the Boy Scouts for Rebecca, her first (my first too!) and tied it around her wrist. She loved it. Then, after short naps, we went out to Canyon Creek for a family gathering that included the Hurds, Vernon and Ruth Ryan, and Nancy and David Adrian and their children.

Back in town that Sunday afternoon I took Rebecca to see the movie Dr. Doolittle. It was too long for her and had too much singing but otherwise was ok. “She consumed more goodies than I should have allowed but she was tired and also restless.”

The next weekend we were back in town again. Moon Lee was having a party and, sitting on our porch drinking iced tea, I recognized Leonard’s voice and a laugh that was familiar but that I couldn’t place. The Lees lived right across the street from us, on a small hill.

In town the following weekend, Bob had begun digging a ditch for the sewer line from the house. One morning I vacuumed white sheetrock dust from his work on the ceiling in the addition while the children watched Captain Kangaroo. After lunch the next day I helped with digging the ditch. about six feet, 18 inches deep. “It’s very hard work and I’m quite tired tonight.” The ditch was completed though from the septic tank down to where a backhoe could reach it. This was when we were still planning on an easement from our neighbors, but a week later they informed us that they weren’t giving us an easement.

“Rebecca was going to sleep outside tonight in her tent. I took her sleeping bag out and flashlight. About five minutes later, here she came, lugging the whole works—she’d changed her mind. Maybe she can nap out there tomorrow just to get used to the idea.”

In mid-July I built a tree house in the apple tree nearest the generator shed. “Made a wooden ladder to get to the first platform and made another platform above that. It took a long time and by the end of the day I was screeching at Rebecca and had bruised my thumbs from hitting them with a hammer. My own fault I guess for starting it with my limited carpentry abilities but it’s pretty nice now. Rebecca had no nap and was anxious to play in it so we fought over property rights. “

The next day I was working on some boards for fences around the little trees. I was getting nails from on the back porch and Rebecca stepped over the ladders we used like fencing along the edge of that porch. I yelled, “Don’t go over there” but she did anyway, tripped and fell off the edge about eight feet. I ran around to where she’d landed, mostly on rocks, and she was lying on her back screaming. It knocked the wind out of her, and she had abrasions on one shoulder blade, her lower back and her head. After she lay on the couch for awhile she complained about her stomach, so of course I had visions of internal injuries. I thought it was probably fright and having the wind knocked out of her but figured I should call the doctor just in case. I dialed the number and the phone went dead. So we drove to Big Bar where I called again. Reassured (Dr. B. said that the worst thing to do if it had been internal injuries was going on our rough road—thanks doc) but by the time we got home she seemed suspiciously healthy. 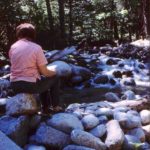 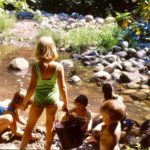 July 21st we went out to Coffee Creek to Alice and Horace’s delightful cabin. That was fun –with Florence and Leonard, Alice and Horace, and several cousins. There was a shallow area in the creek where the children could play. Leonard caught fish so we had fish with dinner the second night. We cleaned up after dinner and came home where we watched “the men step on the moon and the rock-collecting events. Fascinating –looked as if they were jumping in water—slow motion. “ 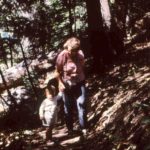 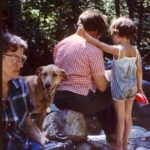 Several Trinity County residents were interviewed by the Trinity Journal about their reactions to the moon landing.
Robert Morris: “The basic principles used in the moon landing have been around since Newton formulated the basic laws of mechanical motion, but the technology required to do this job is extremely recent. Without the digital computer, we’d never have gotten off the ground, and all the other technologies involved are very recent. I think that probably the most important thing that has been demonstrated by this accomplishment is the crucial requirements of meticulous planning and reliability of systems. We’ve never had this kind of reliability in any technological system before and we’ve learned a lot about achieving reliability in all kinds of technological systems now.”

Bob was happy because someone was being transferred from Victorville to help him at work. He has been swamped.