This morning Bob got up early to go down to the creek to meet Scoot Miller. Scoot worked 1 ½ hours hauling shale to backfill the cribbing and raise the road level. Florence Miller came in to get him. He had to be on standby out at Mule Creek by 10 a.m. He’ll be back again tomorrow. Kevin Lewis is coming in tomorrow to work with Bob also.

The asters are starting to bloom. Candie called yesterday morning about the possibility of a backpack trip.Instead of that we spent good afternoon up Swift Creek. Candie took lots of pictures.

On Friday I wrote that I’d awakened while Bob was in the shower. “ I haven’t gotten up early and fixed his breakfast all week and was having a dream about collecting old boards, small logs and other wood in Lowden Park and having to scrape dog feces off of it. I got up! Had a fire going, honeydew melon on the table and was fixing a friend egg and French toast when he came downstairs. It was dark, cold and the moon was shining at 5:30. The canyon is filled with fog now.”

Wednesday it rained quite hard. I worked down at the creek for two hours, from 4:30 to 6:30 cutting and fitting the edging boards—didn’t get much done because I’m slow. Coming home I could see the rain beginning over against the mountain, a small silver curtain, and by the time I was in the garden picking lettuce it was beginning. Wednesday morning Rebecca got up at 5:00 and went down with Bob—she cut $3.50 worth of wires and helped with a few other things. I picked blackberries and made a peach-berry cobbler. Also made a loaf of bread as we were nearly out. Took still warm cobbler down to the creek at lunchtime. After lunch I mowed the lawn.

Tuesday Kevin Lewis came and worked with Bob all day. He has been coming in from 6 a.m. to 12 since then. He’s working on a cabin way up on the hill above North Fork (above Old Helena). He said there was four feet of snow up there last winter. Tuesday afternoon I cut up three big pieces of wood for firewood. Bob had hauled them out Monday night.

Jeff woke up at 6 a.m. Tuesday morning and managed to wake the rest of us up, anxious for his presents. Tuesday morning I baked a cake for him. Put frosting on in the late afternoon, flavored with crushed strawberries. I was writing the above by candlelight. At 6:39 some light was coming in from the windows.

The previous day, Clarke and I went into Weaverville in the white stake-sided truck, without the racks on. Went down to the creek at 10:00 and unloaded stuff out of the truck. Bob drove it over to Walden’s and I drove the VW. I didn’t want to drive that wide truck on a few places. We left the creek around 11:00. The truck rides rough and the steering is stiff but otherwise it is ok. We went up to the house, started a laundry; went to Brown’s for grilled cheese sandwiches and cones (where Michael and Dick came in to eat too. Clarke and Michael had a good visit—silly 5-year-olds).

Parked the truck down behind the post office. Went to North Valley Bank and took out $600 from our savings account and took it to Bank of America to put in our separate checking accounts. Went to Van Matre’s to get terry cloth to cover the cement (and didn’t get enough). Went to Hal Goodyear’s for plywood and carriage bolts. Went home to do more laundry. Went to Florence’s to get vegetables; Richerts to get metal; back to Hal’s to get the carriage bolts which I had left there; then to the service station and back out to the ranch. Arrived at the gate about 5:30 and Bob, Rebecca and Jeff arrived about a minute later. Clarke was asleep when I got there and when he woke up his dad was driving and I was driving the other car. What a strange sensation that would be for a child! Went up to the house and fixed salad, tuna fish sandwiches and corn from Florence’s garden for dinner. There was just enough of Wednesday’s cobbler for dessert.

Called my dad in Seattle and he said my mother was having physical therapy but a lot of pain. The doctors think she will walk again. I sent her a terrarium, thinking that when she got home it would be nice to be able to take it with her.

Monday at 8:30 pm I was writing that I had just come up from the creek about 45 minutes before. Bob was on his way. That morning I’d fixed breakfast, washed dishes, peeled peaches and made a one-crust pie and started some meat marinating before I went down at 9:00. Dinner was ready. “My hands are still stiff f rom hammering and sawing and my biceps are sore and so is my neck and my legs ache. Yuck! Bob just d” rove up so I stopped whining. We had gone into town Friday and done the picnic with the Fields on Saturday, I think up Swift Creek.

After dinner we went back down around 10:00 and stayed till 2:30 a.m. We had a light running from the portable generator. I held the light for a while as Bob worked and then he put it up on a pole so I could be loading scraps of wood onto the truck when I wasn’t directly helping him. Had to hold nails between two fingers on the other side of the form while he nailed them, when he was putting in anchor bolts on the pier section. It was chilly when not working and I got cold when I was holding the nails. We’d taken the dog down with us because she caught up with us at the barn and also because I thought it would be better for her not to be home at night late without us. She chased bugs in the water. Brrr. We put her in the car because she was distracting. Came home and took a hot shower. Was in bed by 3:00 m. and up at 6:00. 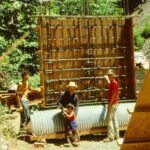 Tuesday we were down at the creek by 6:45. I went over to open the gates and on the way back cleaned out rocks. When I got to the lower gate John Scott was there, just turning around, with his truck and backhoe. Larry Anderson and his helper caught up with me just before I reached the creek. Jack Simmons got here and they began. At first I just took pictures and talked to Jack. Later I was cleaning off tools and boards with the hose and got thoroughly wet and cement spattered. Bob and the others were really spattered though. I went up to the truck, parked on the turn, and brought down two pairs of goggles for them.

After everyone left I went up to the house and fixed lunch. Left around 12:30 and stopped at Big Bar for air and gas (took over 12 gallons). Bob had siphoned gas out for the portable generator. I got into town about 15 minutes before Jeff got home (I’m guessing the children had stayed with grandparents that weekend).

The children had been in school a week. Clarke had gone with Scot Lindsey the first day, and Kelly Sheen; waiting by the doctor’s office. Thursday he left from there also as I had to go out to the ranch to water the cement. Wednesday and Friday he caught the bus at our driveway. He left at noon every day and got home when Rebecca did at 3:00. He was very tired by then and cross and dragging until bedtime. There were 17 in his class.Jeff had Mrs. Rourke and 26 in his class. Rebecca’s teacher was Dale Kennedy and there were 34 in her class.

I was taking care of nursery school business and trying to begin cleaning the Weaverville house.

And then some exciting things started happening. I received a phone call from a man who said I was being considered for a position on the North Coast Regional Water Quality Control Board! A second call gave me an appointment for a phone call for that Monday. The board meets in Eureka and Santa Rosa so I was concerned about transportation “but I’m determined to do it if possible.”

We had a marvelous thunderstorm at the ranch in the late afternoon. Lots of lightning and thunder, curtains of rain coming across the canyon toward us; ozone heavy in the air; a cool breeze flowing across my bare arms. Later there were salmon colored clouds and mist rising from the canyons. Driving out there were thunderheads piled on top of each other—great, white cauliflower puffs up into the sky and, as we neared Big Bar we drove through strips of sunlight and shade cast by the clouds over the highway and river.

After dinner Bob asked me to go up and try to get some pictures, which I did, but I thought it was too dark. I sat up in the meadow and watched the thinning clouds darken and the hills melt into a purple, dreamlike shadow as the first bat flew up against the clouds, then plunged downward.

Thursday was a long day. Jeannie Meyer rode out to the ranch with me when I went to water the cement. When we got back I dropped her off and went over to Lowden Park to talk to George H. and Don L. about the additional room that was going to be added to the recreation building for the nursery school and small meetings. Then took Jeff to the dentist and went to the school to pick up Rebecca and Clarke as they both had dental appointments. That evening I had a nursery school board meeting at Kathy Barnes’ house and didn’t get home until after 11.

Friday I had a postponed birthday party for Jeffrey. I’d sent out coonskin hat invitations made from construction paper. Made a cake Friday morning. At 2 I was downtown getting favors and passed the bus going up the hill. I got home about 15 minutes before Jeff and Keith arrived. Put them both to work helping and then sent them down to the bottom of the driveway to keep people from driving up and creating a traffic jam. Rebecca stayed only long enough for a glass of punch and then went to a friend’s party over near the elementary school. There were seven guests plus Clarke. We had only one organized activity. I’d hidden four stuffed animals in the garden and they had to find them. I’d taken some large cardboard boxes from the hardware store in the big truck Thursday afternoon and had drawn lines on them to represent logs in stockade. They didn’t play with them much.

Anne Marie gave him comic books and after he’d opened all his presents he and Anne Marie and Josh read comic books. The others became restless and rowdy so I took Jeff aside and told him he had to participate. I suggested kick the can. None had played before so I showed them how to play and they did that for almost an hour. Took everyone home and picked up Rebecca from her party on the way back.