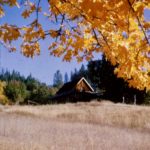 I’m finding that it’s really hard to locate pictures to illustrate my writing. Always wonder whether I just didn’t take pictures for a while or whether they are lost in the boxes of little yellow boxes. I know that the busier I became, the less often I wrote.

On November 7th I was looking back at October. I had taken the children trick-or-treating, having finished Clarke’s rabbit costume at 5 p.m. that evening. They didn’t just get turned loose but wanted to go to specific places so I’d drive them. I mentioned that we had a little trouble with Dr. Breeden’s dogs. They apparently weren’t home but I got the kids back in the car before anything happened. Terrible growling. The last house we went to was the Ohde’s and we spent about 20 minutes there, where I had a cup of coffee. Unfortunately I can’t find pictures of the costumes.

Tuesday night was Parent Effectiveness Class. Thursday night was the nursery school night class. “Katy Festinger came up from Redding and led a discussion on Women’s Role. It was a relaxed evening, lots of laughter and fairly low key”.

Friday I cleaned house. Rebecca went to Florence’s after school for a riding lesson. “Florence brought her home right when I was yelling at the boys. Rather embarrassing. Saturday Florence and I went down to the mill yard and gathered firewood. We got two loads with the small store truck, quite a bit of it being bark.

Sunday afternoon I rode to Redding with Bev Forero and Pearl Bigelow to hear the Sacramento Symphony at the Civic Auditorium—part of the Shasta Community Concert programs. Really enjoyed the symphony-“time zipped by”. Afterward we went to Sambos for coffee and a sundae. I’d asked Bob whether he would put the ham in the oven and he did that plus putting glaze on it. We got home around 6:00 to the delicious smell of ham.

Thursday, November 22: I was up at 8 a.m. Bob was still sleeping and the children didn’t know I was up yet. It was snowing and there was about 1/2 inch on the ground. Bob had left Monday for Bakersfield. It was snowing so Lonnie couldn’t fly down. He drove as far as San Francisco and they caught a plane there. The company plane took them back to San Francisco on Wednesday afternoon and he had gotten home around 4:30. Tuesday I put chains on the VW bus so I could get to nursery school. The school bus was late that morning so I called Rebecca and Jeff up from the bus stop and dropped them off on my way to nursery school. I also had to drop off three card tables, my cranberry bread and Rebecca’s beautiful challah bread and a nursery school mother’s cake at the bake sale first. Nursery school was really hectic that day and I didn’t get away until 1:30. We (Clarke was attending nursery school) met Florence at the Post Office and gave her a ride downtown and then to her home where she took Clarke and put him down for his nap. The afternoon was filled with home chores and then taking Anne Marie, who had come home with Jeff, home. Was half an hour late picking Rebecca up from piano lessons. Groceries, gas and then picked up Clarke from Florence’s. Was supposed to go to Hayfork for a Forest Forum meeting with Jeanne Meyer but we cancelled. It was stormy and I was exhausted. Had a good evening at home with the children and got some paperwork done.

Below is a picture of Clarke with two other nursery school children, Kelly Sheen and Bobby Clark. Rebecca was visiting that day. 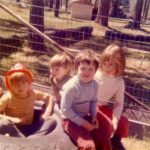 The previous Sunday we’d gone out to the ranch, leaving town around noon. We built fires in both stoves and huddled around them to eat, sitting on the floor by the heating stove. I’d taken hot soup for lunch, which helped. Then Bob took the boom truck and I took the VW bus and we went up to the flat. “I was so pleased with the children—they helped haul and load wood for about an hour and a half. Rebecca stood in the truck and stacked while Jeffrey and I hauled with Clarke helping when he could. It was cold and hailed occasionally even though the sun shined a lot. Bob cut all madrone—some green, some not. The children went back to the car while we finished. From there we went down to the creek. It was very cold out and nearly dark when we finished. Got home around 7 p.m.

On the 24th, a Sunday, we again went out to the ranch, leaving around 11:30. Again we built fires in both stoves and ate lunch sitting on the floor in front of the heating stove. “I went outside to put garbage in the garbage can and heard a noise and thought Bob might be on the roof (!!?). I looked up and saw a ring-tailed cat scooting along the narrow edge of the top log, just below the porch roof. It got over to the corner where the two porch roofs join and peeked down at us—an absolutely charming face—big pink ears, dark eyes with circles of light fur around them, pointed face with a shiny button nose, dark body and ringed tail- about the size of a grey squirrel. Rebecca said she saw nipples so I guess it was a female. Very curious—would look over the edge of a rafter, hanging its head upside down to look at us. It stayed there until we left to go down to the creek.” 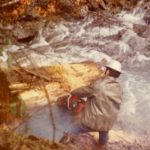 When we reached the creek I built a fire on the road for the children. “I’d brought marshmallows. We cut willow sticks and they roasted marshmallows while I helped Bob with the truck. He got one log cut up and all but one piece out before it got dark. The last piece slipped off twice. We’ll get it tomorrow. The children were awfully good—toasted marshmallows, ate peanuts and grapes, put sticks into the fire, watched each time Bob dragged a log up. All those pieces of log will make good firewood.”

We went back to the house with my driving closely behind Bob’s truck because he didn’t have any headlights. Just below the house there was a place where we had to get a run at the hill because it was quite muddy. After we were all back in the VW we left. And on the way out saw a bear, at least “its big furry hindquarters” plowing down the road and then up the hill. We saw a doe and a buck too. Ate dinner at Big Bar Station. We had to wake Clarke up to eat. He’d fallen asleep the minute we left the creek to go up to the house. When we got back to town I put him right to bed, after pulling off his boots.