September 7th
Bob called twice from Ft. Lauderdale and from Boca Rocan, Florida. He read a book I’d recommended on the way and liked it. He thought he might be back Thursday. He was attending an I.B.M. training session on computers. 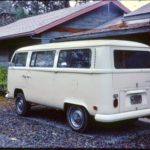 We had gone out to the ranch Saturday with the children, taking Robin Meyer with us. He had to leave right after dinner. The next morning we went for a walk and then returned to town around 5:00. We picked plums, apples and tomatoes. The bear had been into the grapes and left “great piles of dark droppings, seed filled- in the upper right corner of the orchard.” I mowed the lawn that morning.

Friday I took the VW bus to Miller’s to be lubed and started walking home with Clarke. We stopped at the firehouse where he sat on the seat of the old fire engine. We stopped at the hardware store and the post office; had a snack at Brown’s; got as far as the Young’s duck pond on Oregon Street where we saw a doe and twin fawns cross the road. Lonnie came up with our vehicle while we were standing there and we drove the rest of the way home. 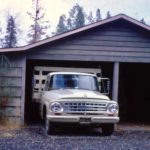 By now we also had a stake-sided truck, which was great for our hauling needs. I rarely drove it but remember driving it more than once on our narrow road. I’m not sure whether by then we’d sold the jeep but I think we had. 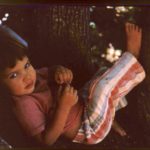 Then there were no journal entries until Friday, October 5th.

A lot happened during that interval. My mother had another stroke but was home and o.k. It was really hard on my dad. My brother, Richard and his wife had gone down right after it happened.

The week previous to this October entry Bob Omstead, Jim Kennedy and Steve Searcy died in an airplane wreck on a foggy morning, skidding across the highway near the airport and nearly hitting a school bus. Rebecca and Jeffrey were on a bus that drove by moments after the tragedy. The town was in a state of shock all week and beyond.

Bob went to Dallas, Texas that October week on a Sunday night. Then he went to Southern California on Tuesday and home Thursday afternoon.

We had gone out to the ranch that weekend with Mike and Erin Quinn. They helped Bob put a metal roof on the barn. I spent most of that weekend cooking. I got sick on Tuesday night and didn’t go to the Women’s Role class in Redding with Jeannie because of not feeling well. Wednesday I went to the Parent Effectiveness class in Weaverville and it was officially cancelled. I decided to drop the Women’s Role class and take Parent Effectiveness in Redding, also a Tuesday night. Esther Little was going to go too.

I was feeling a bit down about having little time for myself. Clarke was really missing having Rebecca and Jeff around. Was also wishing Bob didn’t have to travel so much.

The next Monday I was “semi-watching” ballet exerts on Channel 9—“fire in the fireplace, smelly dog on the floor.” I’d moved Michael Morris from the kids bedroom where he and Clarke were keeping each other awake– into our bedroom– until after 9:00. Florence and Leonard were at an Art Center dinner and had Michael all day. I knew they would be by for him soon. Bob had driven to Eureka that morning and was to catch a plane from there to Seattle.

It had rained that weekend and we’d gone out to the ranch Sunday afternoon where I picked apples and this really lifted my spirits. “I love the smell and feel of the apples—it’s a sensual experience—good to eat too! The bear has been around a lot. Claw marks on the tree by the generator shed. We ate dinner down at Big Bar—soup and salad for Bob and me.”

I made two batches of applesauce and froze 4 ½ more quarts plus having a quart to eat. Ran off some papers for the Community Concert. Tuesday night I went to the Parent Effectiveness class in Redding. Jeannie drove and dropped Esther Little and me off at Nova High and she went on to the Women’s Role class at the college. We got home around 11:30 and I stayed up reading “A Proper Marriage” until 1:00.

On Wednesday afternoon Patty came to take care of Clarke and I took Rebecca and Jeffrey to Redding. “We had sandwiches and hot dogs at the Shack, then I changed clothes in a service station restroom and we went to the Community Concert. The program was Little Angels of Korea. Bright colors, many costumes, lots of movements. The children stayed awake thorugh the whole thing! Precision dancing. Some of the dancers were as young as 8. We didn’t get home until nearly 12.” Bob was in Seattle and I called him at my sister-in-law’s house where he had gone to for dinner. He’d be arriving home the next day.

And then no more entries until October 25th. 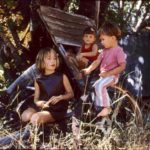 “Just got back from a nursery school board meeting. We met at Sharon Tucker’s house this time. Barbara Simmons had us all in stitches.” I was pleased that Bob was going to be home all that week.

I got 22 people to sign a Common Cause petition over the previous two weeks concerning political officials listing all financial contributions and lobbyists registering. Got the last two from the Hamiltons last evening on my way into town from Redding and sent it off today.

Pete Richerson, the guest speaker for the Forest Forum, spent the night with us a week ago. Only 10 people showed up for the program and I was really upset about that. Apparently the main reason for the poor attendance was the World Series. He had come all the way up for this, slept in Bob’s shop. Left after breakfast the next day.

One day I drove out to the ranch with Barbara Michaels and Clarke. We ate lunch and walked up to the woods and back, getting home a little after two. The week before that I’d gone out with Doris to pick a lot of apples.

“This weekend we noticed that the bear has broken a lot of branches off the big tree. The colors have been beautiful this fall. Even the oaks are yellow, gold and red instead of just turning brown.“

“Secretary of State Kissinger was on a special news broadcast this morning while I was getting Clarke dressed—about the Mid-East crisis. Nixon has now volunteered to give up all the Watergate tapes. He’s sure in a mess on domestic affairs. “

I was working on making a rabbit costume for Clarke for Halloween and hoping I could get it done in time.

October 30th
I had just gotten back from Parent Effectiveness class and was watching the Tonight Show for a while.

“Last Friday I walked up Canyon Creek as far as Canyon Creek Meadows. Left Clarke with Florence. Left the trailhead a little after 12 and got back to the car around 4:00. It was a beautiful walk—I was really pushing myself but had a marvelous time. Fall colors still quite spectacular. Saw some deep wine-colored choke cherries against a snowy cliff. Lots of water in the creek—big waterfall before the meadow. Kinnik-Kinnick loved the snow. We ran into patches 1-2 inches deep up near the meadow. The trail was running several inches deep in water beyond the meadow. I lost my Sierra cup.

Saturday Bob and Jim Austin worked on trying out an FM aerial up on Oregon Mountain. In the afternoon he went out to the ranch where he cut up one of the logs in the creek. He didn’t get home until 9:30.

The children and I went to a costume Halloween party for the Van Duyns starting at 6:00 that evening. It was kind of fun. I dressed in hiking boots, levis, etc., carried a backpack with all the “lib” books and others that I’ve read in the pockets. Rebecca was a wizard, Clarke a ghost and Jeffrey a tiger (he won a prize for the most scary—a mirror).

That Sunday Bob, Eric Woods and I went over to see some land of Ed Hostetter’s up Big Bar Creek. “It’s a fantastic place—the canyon opens up into a big meadow; the creek is close by—large and clean. There’s a dam under the maples at the upper end where the canyon narrows again. A large ditch goes from there out to the meadow—would be easily put into use. We ate lunch by the creek across from a barren, rocky place at the head of which was a spring. We tasted it and smelled it to find it was sulfur. Hiked on over to Ed’s old place where the foundations of the original house still sit overlooking the river. He had really put a lot of work into it. After the house burned he built a little room in the barn. which lies at the west end of the meadow. A bear had gotten into it—food, newspapers, containers scattered all over the floor, along with rat droppings. Really sad.” Bob was in Moab, Utah when I wrote this.