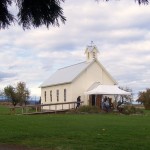 Some days are a surprise and today was one of those. A couple of days ago I saw a notice posted on Facebook by a friend (to whom I was introduced by my daughter almost 6 years ago when we shared a ride to my granddaughter’s baby shower) about an event that was to take place today a few miles from where we live. I suggested to my husband this might be a fun thing to do today. 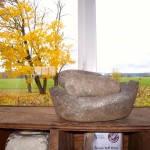 View out back window of store

We had never been to the location before—Camas Country Store—and the event was a pie making contest. So off we went and were soon driving out through farm country and up a narrow road about half a mile where we came to the little store and an old schoolhouse. It turns out that the store sells locally milled flour products (their mill is located southeast of the store and we hope to visit at some point) and that the nearby school, the object of the fundraising contest, is an 1888 building that used to be located a mile-and-a-half away, in Alvadore. What a treasure!

The school is one room and has a belfry. It’s rescuers hauled the building to this location, rebuilt parts of it due to structural needs; used some of the exterior wood on the inside as part of that refurbishment; and put some inside the little country store as part of the walls. There are e 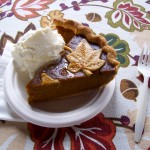 ven signatures from students of long ago on some of the boards in the school. https://www.camascountrymill.com/the-schoolhouse-project/

Today, inside the school, there was a long table covered with homemade pies; a table with coffee, hot water and cold water for beverages; and numerous tables and chairs for visitors to sit down to eat pie and ice cream. There were six choices for dropping raffle tickets in jars to win some of the store products, a dollar a ticket or five for $5. Standing on a small stag 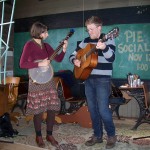 e were a couple playing a guitar and banjo, and occasionally singing. The pie contest had occurred earlier in the day.

We purchased pie (ice cream was free) and a cup of coffee each, sat down and ate, and visited with a couple across the table. We knew no one but obviously many of the guests knew each other. 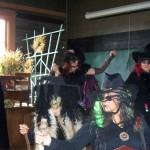 After we’d finished and had just stood up, a coven of witches came in the front door and gathered on and in front of the stage. As their boom box played they began to dance, sparkling belts glistening, brooms sweeping, only to change and lift the brooms in front of them and up with both hands, gyrating. The costumes were marvelous and the choreography terrific. What a 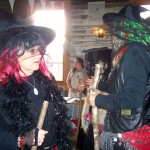 treat! They performed once more outside so people could 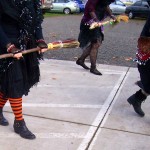 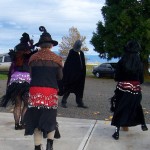 n made eye contact and said something to me, using my name. I said, “I know you” about the same time as she said her name. It was Jeri Linn, who had posted the notice on Facebook. So here we were giving each other a hug after almost six years of seeing each other only on Facebook since that shared trip. I introduced my husband and we chatted for 15 minutes or so before leaving. We agreed to meet at a future date for coffee. A fun day, indeed.