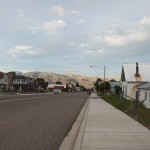 I was in Challis, Idaho for only one night but Tom stayed overnight in an RV park for the rest of that week. Challis has a population of about 1200 people and is located in a rather isolated area along the Salmon River drainage. It is the county seat of Custer County. At one time one of the nearby mines employed 2,000 people but today that number is down to 400. One of the trailers near Tom’s site was owned by a man who works in that mine, and who was working long shifts followed by a number of days off. 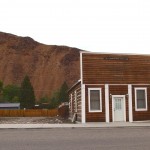 as platted by Alvah Challis in 1876 as a supply depot for the mines and ranches in the area. Custer County was formed in 1881 and a branch office of Wells Fargo was opened there. “In 1918 the sheep population of the state of Idaho was 2.6 million–meaning we had six times as man sheep as humans.”–from a chamber of commerce website. Sheep had replaced mining as the primary industry. 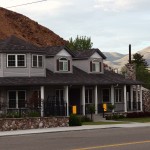 We ate dinner in one of the local restaurants that first night and were grateful that they served us just as the last person was leaving. Our watches still had Pacific Daylight Savings time and were an hour earlier. They just closed the blinds, turned the closed sign on, and fed us, with no sense of rushing our meal.

After dinner we wandered down the street a ways and I took a few pictures. Rounded hills form a backdrop for this small town. I was in Challis only two more times, both times in cars that needed gas and clean windshields because of our back roads habitat survey trips. Tom was a 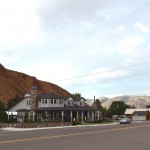 ble to get in a game of golf one day with a friendly group that called themselves the Old Geezers. And one day he explored a few back roads near town. Another day he came out to where I was staying and we took a hike into the Sawtooths. (see previous article)

It’s always fun to see buildings still being used that were built in the mid-1800s in the west. And to see how new buildings are built to be compatible with those original structures. We left the area on the 25th, just missing the 9th Annual Salmon River Testicle Festival. There were posters around town.