Well, I made it up Mt. Shasta and back. We left a week ago Thursday, seven of us gathering ourselves and gear together down by the Congregational Church. There was Linda, the editor of the paper and her son David, about 15 or 16; another boy about the same age, named Paul, who came over from Hyampom; Kent, who works for the Forest Service; Gary, the Congregational minister; Ken, the Recreational Director (who, because of having polio as a child, has the use of only one arm), and myself. We took our VW bus….which made things very slow going uphill. 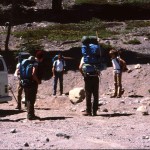 at the Crags. As driver, I called for a very necessary rest stop, and since it was lunch time that seemed a good place. Turns out that Ken went to Chico State with the Ammirati’s youngest son. (My brothers and I went to elementary and high school with the Ammirati children whose parents owned a grocery store in Castella)
When we got to Mt. Shasta we registered at the Sheriff’s office and then rented crampons and ice axes. Drove on up to Bunny Flat and hiked. Stopped at the Sierra Club Hut for cold water and to fill our water bottles since we would have to carry all our water. Too many people u 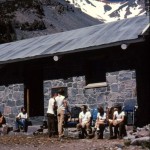 se the mountain I guess to chance getting drinking water from melting snow. The Sierra Club Hut was a little different than I had expected. Made of rock of course, handmade chairs inside by the fireplace, bunks at one end. Water gushes out of a big pipe outside into a galvanized tub. Someone in years past built a causeway, a rock path out of big rocks, leading from the hut up the trail. Very hard to walk on because of the varying widths and coming down almost impossible with sore toes and knees. Most people seem to walk alongside it. We left the hut about 4:00 and hiked on up to Lake Helen, getting there about 7:30 p.m. Steep going up and some loose rock and soft shale to work our way over. There was no lake there but just the bottom of the snow field. People have built rock forts two to four feet high there and we realized immediately why. The wind was just howling down off the snow bank…probably 70 miles an hour. We put on all the extra clothes we had and huddled down in the biggest fort. Gary had brought two stoves and soon had hot water going. We had soup and lasagna–gulping it down even though it was still pretty crunchy. Then tea laced with bourbon. 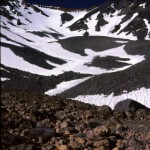 I let myself get too cold there. I think everyone else had down jackets. I had a lot of layers on but still got cold. Once in my sleeping bag though I began to warm up. The glacial dust was blowing all over and, while we were eating, our cups and food would get coated and eyes full. The wind died down about 11 and then the moon came up. I don’t think I slept all night but at least rested. Was warm but I seldom sleep the first night out.

After breakfast we put some food in our daypacks and were ready to go. Lake Helen was at 10,000 feet and four miles from the road (7,000 feet). I had sat up that night and peered over the wall down at the lights of the towns in the valleys, clear to Redding, and up to the Red Banks above us…lovely. A little mouse scurried about among the rocks of our fort in the moonlight. 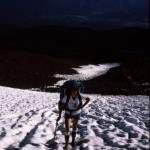 We strapped our crampons on and started off. Unfortunately I had trouble with mine almost immediately. They kept coming off, not exactly a secure feeling. They hadn’t fitted them correctly at the rental place. I got one to stay on but Gary and Ken had to re-rig the straps on the other to compensate for the fact that it was too long and too wide. The ice axes have a spike at the end of the handle and using this plus the crampons worked fine on the hard-packed snow. The snow was pocked with sun-melt holes so that one tended to either walk on the edges between the holes or step into the holes. I couldn’t believe that I was really going up that slope (about 35 degrees) feeling the way I do about heights. The slope was in the shade most of the way up. The snow was covered with glacial type dust on the surface but not as much in the holes. Oh, and when the sun was coming up we had been able to see the shadow of the mountain out in front of us, which was interesting. (It extended clear over to the Trinity Alps.) As we went up, of course, we could look down on a lot. Our view out from Lake Helen had been down upon the Crags and the Trinity Alps. Eventually even Mt. Lassen was below our elevation. One of the striking things about Mt. Shasta I think is the variety of color. The Red Banks are very red—a red-orange actually and other parts of the mountain are almost maroon.

The climbing was a matter of putting one foot in front of the other, often three steps and rest, etc. Alongside the way we were going was a groove in the snow, like a bobsled run. Gary told us we would be sliding down that on our return. “No way”, I said, anticipating hurling down the ice and off into space or rocks or Lemurians or something. We got past the Red Banks and started up Misery Hill, which had no snow on it but was just loose volcanic material. Finally the top…well, almost the top, a big snowfield which Linda and I decided was top enough.We could look down on Shastina and the only part left was a snow slope topped by some craggy rocks. She and I staggered over to the base of the rocks and lay down.

The others started up the rocks a little way and then Gary convinced them to continue. Seeking Ken going up made me figure I had to also. And Linda joined me. My crampon had fallen off for the second time so I went with just one on, mostly over rocks but some ice. So we got up to where the little book is to sign. A man came up then and he took pictures of us with each of our cameras, group shots. 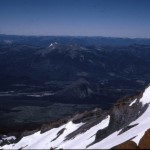 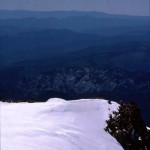 Paul left then to go back to camp because he wasn’t feeling at all well from the altitude. I had been going a few steps and getting a headache and having to stop for a minute about the last half mile but was otherwise OK. We went down to the bottom of the snowfield and ate a little lunch. Not much hunger on a trip like this. We had lemon drops, water, tang, etc. Gary had brought apricot leather, which tasted delicious, and we had devoured a loaf of fruit bread the day before but it was energy we needed, not bulky food. 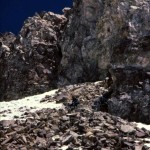 Then began the fun part. Glissading. Kent and I were hesitant but it turned out that the snow had softened a great deal and you could slide at whatever speed you desired and could slow yourself by using the ice ax. It was such fun! We slid about 2500 feet from the top of the Red Banks almost to camp. Part of the joy was thinking about the hours it had taken us to climb up that stretch. We slid down in about 20 minutes, or less.

At camp we packed up and started down the hill. Rested at the Sierra Club Hut and then headed for the car. We ate dinner at the Piemont in Mt. Shasta,,,spicy Italian food really tasted good,.,and (we) kept the waitress busy filling our water glasses. Got back to Weaverville at midnight with the gas gauge resting on empty. Probably the most dangerous 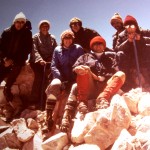 part of the whole trip was my driving home! Linda had ridden in front with me going up but she had two glasses of wine with dinner so decided to ride in back. I had had one. Kent had none but had about six cups of coffee so he rode in front and talked to keep me awake.

For two days I could hardly walk. Not so much from going uphill (sore calves) but from going down (sore thighs). Was going down steps sideways. Had a very sunburned and swollen nose and mouth. Also a great feeling of accomplishment. I guess people climb it all the time but for me it was something I never thought I’d do.