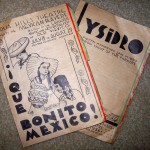 Who knows why we save something for years? I wonder whether my children will also hold something up, bemused, and wonder what on earth made Mom save this?

In the wooden box I’ve been going through of letters that my mother saved, many written to her good friend Gert and then returned to her, I came across two programs to a theater in Southern California called the Padua Hills Theatre. The dates on the programs are April 1 to May 16, 1936 and July 15 to August 29, 1936. The first play is called Ysidro and the second Que Bonito Mexico! Admission was 75 cents.

I looked up Padua Hills Theatre and discovered 2,000 acres of land were purchased with the idea of starting the theater, and as people came and enjoyed, they might also want to purchase land to build home. It was originally built for the Claremont Players and later a Pasadena Playhouse company but they left during the depression. Following the depression, the Mexican Players took over. All of the plays were in Spanish and included music and dancing. The audience was expected to be mostly English speaking but it was thought they could understand what was happening on stage, in spite of that. A restaurant was also built there. Indeed, homes had been built and the area was thriving as an a rat colony. In 1974 the theater was closed and the site began to be used for weddings and other events. In 2003 the theater nearly burned in a raging forest fire. http://www.beardshampoo.com/loscalifornios/zPadua/Vera.html

After some more searching I found a site for a non-profit trying to preserve the history. (http://www.beardshampoo.com/Loscalifornios/zPadua/carommance.html (It’s a project of Los californios, a non-profit belonging to San Diego Friends of Old-Time Music, Inc.) They are trying to identify the different actors in the plays and have many photos of the players as well as of the programs. I saw one program for 1932 but none for 1936 so have sent an email asking whether or not they’d like my copies.

Still wondering why my mother kept these. She was the mother of two by 1936, so it wasn’t romance. Perhaps she went to a play there with my dad—which could have been romance? Or, more likely, with a woman friend? There is no one left to ask.

Sunday evening: I just got a response back from the San Diego Friends of Old-Time Music.

“Thanks for your gracious offer.

We would love to have the programs, and to add them to the Padua Hills Theatre site.

Please mail them to us at:

If you would like to dedicate the contribution to your mother, we would be happy to do that as well.

Thank you so much!!”