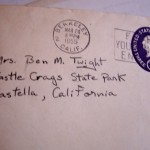 This business of writing and of saving letters written seems to be in the DNA of the female members of my family. My mother died in 1998 and I still have not sorted all of her belongings. It’s not that they are so numerous but they are complicated—bits of lace, a baby’s embroidered bonnet, high-topped white shoes with laces, a couple of beautiful parasols, embroidered items and letters.

A few years ago I started reading letters she had written, that her mother had saved. Toward the end of the Depression my parents lived next door to her parents in Riverside, California where my two older brothers were born. Then they moved further north to Healdsburg and lived in the same house with her in-laws before finally being able to rent a house of their own. She began to write letters to her parents—almost daily. Both she and my father were very close to her parents and missed them greatly, as did the two little boys.

Such a treasure, such a chronicle of the life of a young mother and wife during years when they had so little money and so many hopes. Included in these letters are a few that my father wrote to his in-laws thanking them for money they had sent to help the family and promising to repay them just as soon as his job became permanent. At the time he often worked 14-hour days on a project begun by his father but often there was little or no pay. I started to type them as her handwriting is difficult to read but soon realized it would take the rest of my life so scanned them and have sent the scans to a niece, a nephew and some to one of my children. I’ve not been able to make the documents small enough to send altogether. Eventually I’ll figure something out but in the meantime I felt good that I had at least copied them to my computer. I was finished.

Well, I was finished until last week when, sorting some more of her things, I found a wooden box filled with more letters. This discovery pretty much ended my need to sort and make space for a while. I couldn’t resist. These are letters she wrote to a close friend and I’m guessing she may have told her friend things that she didn’t tell her parents. But also included with her own letters (that her friend had saved and given back to her) are letters from my siblings and me and even some from grandchildren. I decided to read the non-friend letters first and it is such a treat!

There are letters from one of my brothers when he was at college, trying to decide on a career; letters from another brother about people he met at college who were in the environmental field and postcards from him when he went to Europe years later on sabbatical; there are a couple of poems my daughter wrote for her grandmother when she was eight or ten years old; and a list of how many words each of the four of us spoke at age two (I was far more verbal than my brothers apparently) and, for two of us, a list of the words; letters from my father’s mother to the family; and there are letters I wrote to her many years ago. I’m sending these letters on to their authors after I read them.

I rarely write letters anymore except on the computer and I doubt that any of the recipients save them. I do keep a sporadic journal, and have for years, but nothing that matches my mother’s vivid descriptions and thoughts. Mine are more of a way of keeping track of my life—one does lose track now and then! When I fill a journal, I put it in an antique trunk that I painted red (with paint that used to be used in the 70s to make wood look old). Her letters are family history in a box. In this age of texting, Facebook, Tweeting and I-phones these kinds of stories will be lost. That personal connection that runs from heart to brain to hand to paper has evaporated. Some day my children will have to decide whether or not to discard these yellowed envelopes with their three-cent stamps. I’m not sure I can do it.