My new camera arrived and I was so excited. I was a little scared by it just because it was so expensive, around $300. It had a macro-lens, which meant I could take close-ups as well as distance shots. 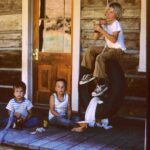 Friday I bought more groceries, took Rebecca over to Florence and Leonard’s to water the houseplants, picked vegetables and berries–I’d dropped Jeff off at the barbershop. It ended up taking me an hour–and-a-half to get back to pick him up. He said he read a lot of comic books. Finished getting the last of the laundry done, the car packed and we got out to the ranch late that afternoon. Drained and cleaned the pool, cleaned the settling tank, mowed the lawn and chopped up a piece of wood for stove wood. Picked tomatoes and green beans from our garden.

The cousins, Jessica and Cedric, were to arrive Monday with Bob to stay for two days. Sunday night I was so tired and wrote that I felt as if my “blood was made of water”, deciding I’d probably had too much sun the day before. And was wishing for more time to myself. I also noted that Margaret Meade whose book, “Blackberry Winter”, I’d just finished reading, had a nanny to help her with her one child plus numerous friends and relatives to help.

Jessica and Cedric arrived with Bob when he came home from work. I worked a lot on Monday to make sure there wouldn’t be too much to do besides children for the two days they would be there. Got the bugs out of the pool, mowed the lawn, cleaned the grass out of the water ditch, brought in the laundry, etc. 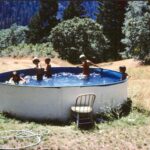 Jessica and Rebecca stayed upstairs that night and Jeff and Cedric downstairs. I put up a stepladder and the laundry rack with our quilt over it to make a sort of wall.

Bob brought out two small I-beams and unloaded them down at the creek after dinner.

Saturday John Scott went to Eureka, leaving Weaverville at 4:30 a.m., to get concrete cribbing and got to the creek with it around noon. He had to make one more trip over this summer. It’s for the retaining wall.

I was writing to myself that next summer that I needed to get some sort of firm commitment from my spouse for me to have at least half a day a week to myself. That out at the ranch there was no one else but him who could help me with that endeavor.

On Tuesday, Cedric and Jeffrey woke up while Bob was upstairs in the shower. So I was feeding him around 6:30 and everyone else kind of as they appeared after that.

The children played badminton all day—between going for a walk around the loop, swimming, playing cowboys and Indians, and feeding grasshoppers to a large garden spider. I made ice cream and everyone took a quick turn at the crank. Cedric and Jeff made breechclouts 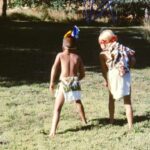 out of towels and belts and I made a stick bow for Clarke and one for Cedric. Rebecca and Jessica were being “squaws” (and here I wrote ‘a shudder for Women’s Lib’). I used up a whole roll of film and hoped that I got some good pictures. They all seemed very tired that night, Clarke probably the most, being the youngest. 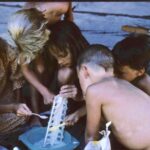 Tuesday there was less activity. They boys played with trucks and water in the sand pile and the girls mashed up green apples, and had a pretend campfire, using pans- living a House on the Prairie type of existence. They used a long straight stick for a water pump. Clarke had disagreements with Jeff and then went off to play with Rebecca and Jessica. I took crackers and lemonade up to them. Got some housework done.

Thursday we took Jessica and Cedric into town—so there were five kids, a dog, and a ton of laundry to haul in the VW van. Took them to Joneses and then the rest of us went up to the house to unload. Went to the grocery store, made root beer. Rebecca and Jeffrey helped with the capping, Clarke with the stirring. 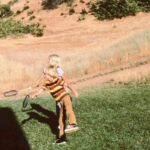 My mother was having more surgery for her hip and I spent some time talking to my dad and to two of my brothers, separately, about the health issues.

The following Saturday Bob and the boys went out to the ranch while Rebecca and I scurried around in town finishing up some things. I cleaned that house, did the last of the laundry and, went to the library and post office. Then we went to Brown’s for milkshakes, hot dogs and grilled cheese to go. Stopped at Big Bar for cream, milk, ice and the Sunday paper.

Here’s a good one to look back on: “ Bob got the children started trying to play music on saws this afternoon. He, himself, did pretty well with Red River Valley. So things were pretty noisy all afternoon. Bob played his banjo and we had saws and spoons going and some times my harmonica. Clarke danced a lot—he really has a good sense of beat, hangs loose—and dances with his dark glasses on.” 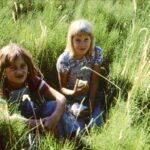 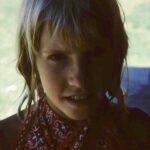 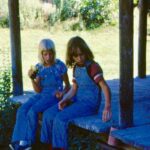 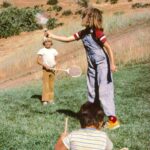 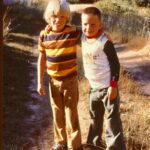