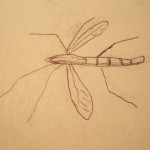 When I was young, probably about six years old, my mother and I walked along a road whose banks were covered with moss and ferns. I was searching for fairies and was quite excited when I thought I saw one—certainly something with large diaphanous wings. In hindsight I think it was probably some kind of crane-fly.

What do you know about crane- flies? Many people associate them with fat grubs that turn their lawns brown. I knew nothing about this aspect of these long-legged insects until I moved into the suburbs where a type of crane-fly lays eggs in the lawns and the larvae kill the grass. Many homeowners poison them and the grubs come to the surface. Yuck. These are the invasive European species. The native crane-flies do very little damage, also feeding on decomposing vegetation in the ground, but not focusing on well-tended lawns.

Among the letters of my mother’s that I have been reading and sorting are several from Dr. Charles Alexander and his wife Mabel. They came into our lives at Castle Crags State Park located in Shasta County in Northern California. Over the ten years that we lived at this park our parents came to know many of the regulars, the people who came back each year to spend their vacation fishing or hiking in the park, or using it as a base camp for exploring other nearby areas. And the Alexanders (no relation) were regulars. Charles was an entomologist at the University of Massachusetts at Amherst whose specialty was crane-flies. Every summer they traveled the United States searching for these insects. As I discovered from the attached website, Mabel did all the driving on his field trips and also assisted him with his collections. http://www.jstor.org/stable/25009159?seq=1#page_scan_tab_contents
He published his first natural history paper in the American Ornithology at the age of 13: “A Young Woodcock.”

Our mother took the Alexanders to some of her favorite spots in the park to help with their search. During the time we lived at the park she had made a comprehensive list of the plants growing there and the couple appreciated her botanical knowledge as well as her familiarity with some of the park’s special places. It was at Castle Crags that Dr. Alexander discovered a new crane-fly, perhaps in one of the pitcher plant bogs. In one of their letters to my parents, this one dated September, 1959 (after my dad had been transferred to Jedediah Smith State Park) he writes:

“Among our piled up mail on our return was the lot of reprints from the July issue of ‘Pan-Pacific Entomologist’ wherein the new crane-fly Tipula Twightae was described. I am enclosing five copies of this, one for you and Ben and the others for the youngsters who will appreciate the honor of having a new species named for their mother. It gave me the very greatest pleasure to so dedicate a very wonderful crane-fly to you as an expression of my gratitude for much help in the past and a further expression of your abilities as a botanist. In case you want some few further copies of this, they will be available.” They found that crane-fly in 1953.

In a previous letter he said they were contemplating retirement – that he would be 70 in September, 1959 and that they had built a research laboratory, attached to their house, “which with its one thousand feet of shelving should provide housing for my great collection of the crane-flies of the world. There are thousands of boxes of all sorts, all devoted to this single family of insects. This collection includes more than 10,000 species, which makes it so large and requiring so much space. We will be very glad when I am able to retire and can travel to various parts of our country at times earlier than June 1 or later than September 1, as has been our limitation during the many years of teaching.”

From a letter written in 1957 after learning we were moving: “Somehow Castle Crags means the Twights to us, and must to many others. Please let us know when and where, as we do not want to lose touch with you.”

What to do? I didn’t want to just toss these letters so I looked up the University of Massachusetts, Amherst and found the W.E.B. Du Bois Library, the main library on campus, has a depository for important documents and archives. I sent them a note and got a quick response back, arriving today.

How interesting the way that your parents intersect with Charles Alexander! We’d love to be able to add more personal letters to the Alexander collection we currently have. We’d also love to preserve the original letter naming the crane fly after your mom and we have very high-end scanners here and could send you a quality digital version for you to print or send to other relatives. Let me know if you have any other questions about the process of donating them.

It’s just amazing where interest and technology can lead!