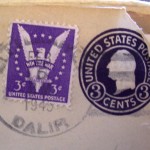 In 1941 we lived at Tahoe Campground State Park, a small park along the shores of Lake Tahoe and that summer my younger brother arrived to join my two older brothers and me. During those early years park personnel moved frequently and often the mountain parks closed for the winter. After that first summer we moved to a house near Arnold, California where my father worked at Calaveras but were there only two months before moving to Carpinteria (12 miles south of Santa Barbara) along the coast where we shared a huge house with the military. We were on the top floor, with we children’s bedroom directly over the ammunition room, and the military occupying the downstairs. The first night at Carpinteria there was a blackout, which meant no lights…what an introduction! Because this large white building was so close to the coast there was concern it might make a good target from the sea. We were there only five months before moving back to Tahoe where we squeezed back into the tiny house.

I have had the good fortune to read letters written by my mother to her friend, Gert, during the years from 1941-1945. I don’t have all the letters but Gert returned them to my mother and those that she saved are still a revelation, not only as to our family life, but also as to how these years affected many people across the United States.

The first summer at Tahoe my mother wrote of having to build a big fire in the kitchen stove in order to have hot water from the enclosed tank inside the firebox. She was delighted this second season (1942) to have “the cutest darned butane one—also a hot water heater. Marvelous to get up to hot water. “ She mentions that a huge army base was supposed to go in between the park and Tahoe City and the possibility of a Navy base somewhere on the other side of the park. My dad was taking some new garbage cans to the main office in Sacramento because they were so scarce and expensive.

In those days the wives were expected to help out with the park visitors and my mother sold firewood and picnic tickets although none for campsites. The campers this year were thrilled because the former cold showers had been replaced by showers with hot water.

“So many have gone either into the army or defense work. Terribly short-handed…”
She said all they could get were older men who not as physically fit as they needed to be.

So here we are in 2016 with the recent invention of shoes that tighten themselves, computers, cell phones,  and soon cars that steer and brake themselves. But in the late 1930s and early 1940s people were happy just to have shoes, happy to have a car and the gasoline to make it run.

A number of sacrifices were asked of U.S. citizens to help the war effort. In 1942 a speed limit of 35 mph was imposed to save gas and save on tires. People were asked to turn in scrap metal and any rubber to be recycled. Most of the rubber trees were in S.E. Asia. Paper was needed for packing weapons so there were paper drives. Sugar was rationed until 1947. Even canned goods were rationed. Victory gardens were encouraged and our mother had a big garden. They were also encouraged to send fat left over from any meats to butchers, who would pay for it, and the fat would then be sent someplace to be used to make explosives. And now I know why our parents saved bacon fat and reused it. If you canned then you needed more sugar than was allotted and had to fill out an application for the extra. Our parents couldn’t afford to buy victory bonds but could buy victory stamps occasionally, which came in 10, 25, and 50-cent amounts. They were told how many of these it took to purchase a hand grenade, or helmet or whatever. And if you filled an album it would equate to a bond.

In 1943, we were living at Van Damme Beach State Park near Fort Bragg, where there was concern about a possible invasion, “not a major invasion but a landing party” She mentions that the cove there “is one of the really deep channels “ along that part of the coast.

“our ration points for that group (meat) are more than adequate”. They were lucky to be able to have fish and abalone that my dad caught. There were ration stamps for gas, for sugar, for meat and other items. People had victory gardens to help stretch their dollars and to help the troops have more of whatever they needed. This wasn’t in the letters, but one time my younger brother, around 2 ½ at the time, disappeared and everyone was searching frantically for him. A stream ran by near the house, deep enough for my older brothers to row a boat, so there w

as concern about that. He was finally found sitting in the car chewing on ration stamps. I’m sure there were mixed emotions!

February 1943
“Five percent victory tax on the paycheck this month, which is all right too, but I hope somebody does something about raising the state’s payroll soon. My God, the grocery prices! And our infants don’t live on hay and water. Milk upped two cents a quart. Oh well, anyway it’s good milk. We’ve been lucky enough to be able to get at least some kind of meat usually although we cut down on it tremendously. …Miss Meyers (an older friend), poor woman, writes she hasn’t had meat since early November! No car and whenever she gets to a store they’re out. She used to live on a soup she made out of beef and her vegetables.” Our father built a smokehouse out of a camp cupboard so they could smoke fish.

Quoting an item from the local paper she wrote “the army dined on abalone steaks today but didn’t know they should have been pounded. Said they sure were tough.”

June 1943
The movie Frenchman’s Creek was being filmed in the cove by the park. 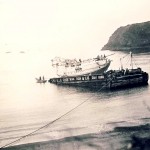 They had a hard time finding a place for our maternal grandmother to stay because Paramount had taken all the rooms at the hotels and “motor courts”. “They towed the ship into our cove on a barge and slid it off. All the natives took two days off to watch. Taking most of the pictures down at Albion, a few miles south of us. Ole (who owned the Little River Inn, just above the park) has all the big shots and his bar is plenty busy.”

“the children play war constantly and it makes the war have a miniature cast”… and a little later… “we can only afford war stamps and not bonds.”

On my next older brother’s birthday in October they had a party that included a number of children and roasted lots of “wienies”. She said “thank God for plenty of points” meaning ration points. 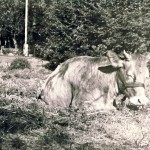 “We had been resorting to margarine this spring, due to the red point situation, and, when someone gave them some (butter), the children couldn’t believe that heavenly yellow stuff was mere butter. It must be some new delectable spread. Then we ran clear out of red points.” This was about the time we got a cow, loaned to us by a man whose last name was Wynn. 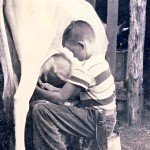 He was required to go work someplace (Sacramento), perhaps as part of the war effort, and needed to have someone take care of his cow. We named her Blondy and our parents paid my eldest brother our regular milk bill for his feeding and milking her, $14 a month. So we had plenty of milk and our mother made butter, real butter!

And through all this was her concern about whether or not our dad would be drafted. His status seemed to change from time to time and once, when it was 1A meaning immediate draft, it went to 2A and she could relax a little, then went back to 1A. Some were able to avoid being drafted by working at jobs that were considered indispensable but he told her he’d rather go in the service. We were fortunate that the end of the war meant he didn’t get drafted.