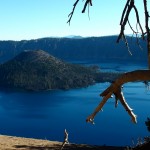 Like to ride a bicycle? LIke to ride with no vehicle traffic and a fantastic view? Saturday September 19th many bicyclists were doing just that on the Rim Drive at Crater Lake National Park. And my husband and I were there to help Friends of Crater Lake at one of the aid stations, rising at 6 a.m. and driving from Mazama Campground to Park Headquarters to check in before taking the winding road to the Rim.

The skies were clear and the temperature in the 30s when we donned our green and orange vests and joined other volunteers to help make the day enjoyable for over 500 participants. We were at Station 1 where the highway divides with the Rim Drive toward Cleetwood Cove (where a one-mile trail goes down to the lake) to the left and the road to Rim Village and Park Headquarters to the right. We were sheltered by a couple of open tent structures. Our table contained two large containers of water so people could refill their water bottles, Clif bars, Clif jells, a few apples and bananas. To our left a co 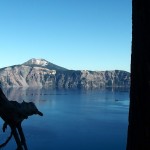 uple of representatives from Discover Klamath took care of registrations and handing out brochures that described the ride, distances between stations, etc. Two other people from Friends of Crater Lake were also assigned to this post. The next stop was 4.5 miles ahead at Cleetwood Cove. Five stations offered snacks, water, and limited tools for bike repair as well as friendly faces and information. This was a cooperative event with participation by Friends of Crater Lake, Crater Lake National Park staff and Discover Klamath. 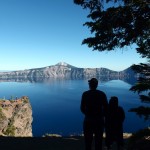 We were very busy, especially the first three hours and then in spurts the rest of the day. The road was open from the South Entrance to the North Entrance but the Rim Drive was closed to cars. There were people of all ages, from youngsters on small bikes to many who appeared t 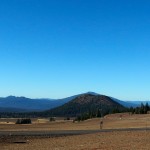 o be 50 and up. Bicycle types included very expensive, light-weight ones to average; tandem bikes to bikes that can come apart and be carried in a suitcase. One woman had a small dog in her bike basket. One man pulled a trailer containing his larger dog. People were asked to not bring pets but in these cases there were no problems. One woman had a toddler, about two years old, riding on a seat behind her. I don’t know when I’ve seen so many smiling faces. This wasn’t a race, although a few treated it as such, but a family-oriented experience. There was no registration fee.

Some went the full 33-mile circumference, which included riding about 10 miles with traffic on the road from Park Headquarters to our site, mostly uphill; some went part way and then turned around. Others picked up a ride at Park Headquarters on one of the green trolleys that went back and forth from there to our station, thus eliminating a long, winding hill and competing with moto 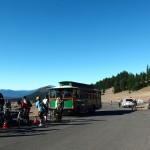 r vehicles. A vehicle pulling a trailer loaded with bicycles was usually right behind the trolley.

We met people from Eugene (one volunteer couple live not that far from us) and people from Salem, Portland, Davis (Calif.), Florida, Seattle, Colorado, Wisconsin, New Mexico, UK/Australia, Bend, KLamath Falls, Portola Valley  (Calif.), Redding and Alberta. One man and his nephew have been biking all over the state, camping wherever night catches them and eating only jerky, nuts, and trail mix, occasionally stopping for a real meal. Never build a fire. He’s an x-Marine. I talked to two seasonal rangers who reminded me of the group I worked with in 1961 and 1962. Were we really that young? I guess so. One is going into the Peace Corps.

The day couldn’t have been prettier. We were even able to watch a sturdy hawk flying over several times—goshawk maybe? I took some breaks to go up the slope behind us to take pictures of the lake; toward late afternoon it was particularly lovely. We were right next to Llao Rock and could see Wizard Island and, when the light was right, the Phantom Ship. We could even get a glimpse of Mt. Shasta way off to the south.

The trees here are mostly lodgepole pine with a scattering of whitebark pine. Some of the whitebark pines are dying from beetle infestations and whitepine blister rust, and they may someday be 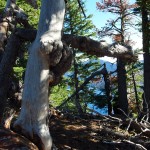 gone entirely, not a good thing for bears and Clark’s nutcrackers (which rely on their seeds as a food source).

On September 26th the Rim Drive will again be closed for a repeat of this event although we won’t be there. http://www.nps.gov/crla/planyourvisit/vehicle-free-days-on-east-rim-drive.htm 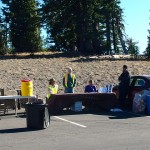 great time, met a lot of nice people, and love Crater Lake. I want to go back and hike some of the trails that weren’t there when I worked at the park so many years ago.