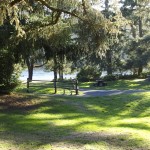 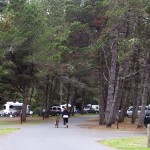 Oregon’s largest state park, bordered on the west by the Pacific Ocean and on the north and east by the Columbia River, contains 4,300 acres of forests (red alder, Sitka spruce, western hemlock and shore pine) and beaches. It has nine miles of paved bike trails and six miles of hiking trails. 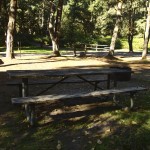 ) and Escape trailers (made in Canada) with a scattering of other types of small travel trailers. This was our first participation in this group, which meets twice a year. My husband, who has never met a trailer he can’t improve upon, was thrilled.

We were in Campsite O46 of this very large campground. Sites in loop O and loop N had been reserved for our group, which turned out to have 21 Casitas and 19 Escapes. We got there Thursday night. Our site was among shore pines that had been planted by the CCCs in the 1930s and was quite pleasant. Behind our site was an area that, during wet weather, is probably a wetland and was filled with red alders, an occasional spruce, and undergrowth predominantly of salal, sword ferns and huckleberries. I munched on a few huckleberries, a very small but tasty fruit, and was reminded of those we picked when we lived on the Mendocino coast when I was a child. Our mother made the most delicious huckleberry pies! The sites were far enough apart to give a relative feeling of privacy but close enough to go chat if desired. A pathway behind the shrubs led to the restrooms if one wanted to avoid walking on the road. 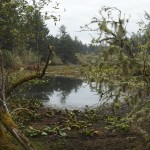 Friday morning we hiked the two miles around Coffenbury Lake, a long, shallow body of water. The lake was named after former land-owners here who donated property to the state parks. We could tell that the lake level was lower than earlier in the year because of the water lilies lying flat along the shore. Foliage was dense but there were many opportunities to see the lake as we walked along. Some of the bracken was nearly eight feet tall. Near the trailhead two men sat on folding chairs, fishing poles in hand, on the small dock. 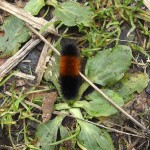 Along one stretch of trail we came across numerous wooly bear caterpillars and some had been stepped on just due to the fact that there were so many. We found elk tracks in the muddy areas and I saw raccoon tracks at the edge of the lake by the dock. There weren’t a lot of birds but there were mallard ducks and we saw a small flock of juncos splashing in the shallows and a kingfisher perched on the upright limb of a fallen log. A Douglas squirrel scolded us from the branches of a spruce.

Saturday night a hotdog roast was scheduled at the leader’s campsite so we drove into town and purchased hotdogs, buns and more beer since a beer exchange was planned. It’s been years since I’ve roasted a hotdog at an open fire and people were generous about loaning their metal skewers to those lacking one.

This was the first time I’ve been in a campsite with a brazen raven. We had to really guard the food on our table. One day my husband ate half of his sandwich and then went to discuss our trailer with another trailer owner. Both were inside. I left the table momentarily to rinse something at the faucet and as I turned back saw the raven fly off with half of his half-sandwich! They are such smart birds.

Sunday we drove to the historic military sites that are a large part of the park and spent a couple of hours wandering about looking at relics and reproductions of weapons that date back to the Civil War when President Lincoln was worried about attacks coming from Confederates going up the Columbia River. I had no idea! 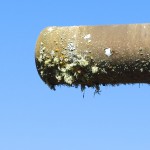 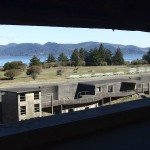 Fort Stevens was named for Territorial Governor General Isaac Ingalls Stevens, who was killed at Chantilly, Virginia, in 1862 and was constructed during the Civil War, remaining active until shortly after World War II. A thriving Clatsop Indian village (Neahkeluk) once stood here along the banks of the Columbia River and was used seasonally for fishing and trading.

From the top of the concrete gun batteries the view is toward the Columbia River and Trestle Bridge, across a large wetland. The trestle is left from when a train was used to haul materials to build the South Jetty. We found a sign stating that hunting waterfowl is allowed in the park in a designated area but hunters must shoot toward the water, not toward the land. A ranger was tromping through the wetlands in his rubber boots putting up signs, probably to mark the boundary of the hunting area.

One unexpected discovery for us at this site was the heavy elk usage. It smelled like cattle there and droppings were frequent. We found hoof prints on the top and the ranger told Tom that there were several herds. During the days of the military usage there were probably no trees around the fort but today forests have grown up and there is a mixture of shelter and open meadows, as well as a freshwater creek, that elk would find appealing.

Sunday afternoon included a quick trip to the beach. Sunday night was potluck night. We took some 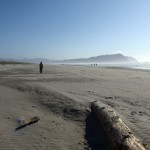 leftovers and a nice loaf of bread but the tables were so heavily loaded our contribution probably wasn’t needed. We did get raves for the bread though. At this gathering the group voted on the site for next year’s rendezvous, Cape Lookout State Park