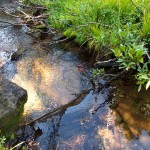 I took my leftover pizza, an apple, and a bottle of iced tea and sat by Munson Creek, a little stream that runs through the Park Headquarters area at Crater Lake National Park. As I sat looking at the sand sifting through a very small, sunlit pool I was moved almost to tears by the water and by the familiar scents of warm duff as well as the needles of mountain hemlock and red fir—transported back to the summers of 1961 and 1962 when I was a seasonal ranger naturalist here. In the midst of my nostalgia, a shadow darted across the pool. What? A moment later another shadow and I realized that Munson Creek must have fish. There were several, and the larger one must have been about eight inches long. One at a time would hover in the middle of this brook, facing upstream, fins holding body in place, feeding. My guess is that they were brook trout.

Last weekend my husband and I participated again as volunteers for the Crater Lake Ride the Rim event, helping staff an aid station, in this case the one at Park Headquarters. Ride the Rim is co-sponsored by Crater Lake National Park and the Discover Klamath organization. For two succeeding Saturdays, the east rim (24 miles) of the park is closed to car traffic from early in the day until 6:00 pm. Bikers, runners and walkers can make use of the road without car traffic. A nine-mile stretch from park headquarters to the north junction is still vehicle accessible. Riders may choose to bike the entire distance or just the 24-mile stretch. 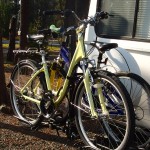 We brought our bikes for a ride at Diamond Lk.

The first year that we participated we were both stationed at the North Junction. Last year we went for two weekends, each of us volunteering at the North Junction for one day while the other tried to do some riding. The stations provide water, fruit, ClifBars and information about the route. It’s fun to interact with the riders and see them having such a good time. Participants start either at Park Headquarters or at North Junction.

It was nip and tuck as to whether we were going to go because of all the smoke here in Eugene and at the park, where several fires were burning. I’d check the web cam for the park, look at fire incident maps and try to get a feel for the situation. The North Entrance to the park was closed and the closure included several miles of Rim Drive. Would it be open in time? We decided to stay home. Then, a few days after we were originally going to leave, we decided to take a chance. Our little travel trailer was already packed as were our bags and I’d purchased masks. I took the groceries that needed refrigeration back out to the refrigerator in the trailer; Tom put the bike rack on, and we were ready. This time we wouldn’t ride on the rim but hoped to get some riding in at Diamond Lake, where we would be staying for three nights. 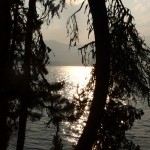 Highway 138 was closed due to fires so we took Highway 58 over Willamette Pass. This was not encouraging. The smoke was so thick we couldn’t see Odell Lake. When we got to Chiloquin there was still quite a bit of smoke but as we headed toward Diamond Lake the smoke began to thin. But when we drove past the park entrance a sign said the park road was closed. Yikes! As soon as we arrived at the RV park I asked personnel there whether they knew anything about the National Park entrance and they looked it up online. The road would open at 6:00 p.m.! That was a relief. Otherwise we’d have had to drive around to the Sout 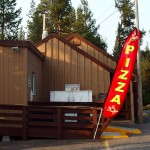 h Entrance the next morning. 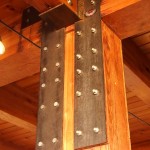 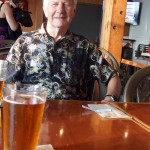 I’d packed plenty of food but that night we opted to eat at a little pizza place (South Shore Pizza) located just below where we were staying. We walked down a short path, crossed the street, and there we were. Mt. Bailey, usually visible across the lake, was barely a shadow because of smoke. The pizza place doesn’t look like much from the outside but inside is quite nice and we admired the sturdy wood structure, definitely designed to stand up under winter’s snow. They are open only Friday through Sunday now and serve very few tourists but the fire fighters are pleased to be able to go there for fo 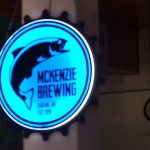 od and beer. We talked to several of them and learned that they were doing containment, riding bulldozers, felling trees, etc. all day building containment lines. They were obviously very tired from day after day of hard work. One man, who followed us back up the trail after dinner, said that it was a relief to walk after bouncing up and down on a dozer all day.