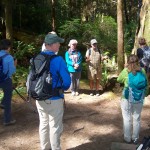 On my last day in the redwoods I joined a hike. We carpooled down the dusty road to the Stout Grove. It seems almost criminal to drive across those ancient roots. I knew the 12 of us we were going to Mill Creek via the Stout Grove, while we had gone to part of the Stout Grove from the kayaks.

This turned out to be an educational tour, with Dan as our guide, and I must admit to being a bit frustrated with it at first as I mostly wanted to hike. But I used to live here and  had to remember that some of our group had never seen a 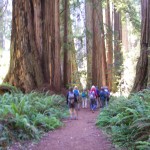 redwood tree before (a difficult concept for me to grasp!) let alone a grove of them and the accompanying understory. They were amazed at the size of the cones, delicate things about one-half inch long; the height of the trees up to at least 300 feet for some; and the variety of ferns– maidenhair, sword, deer and others. Where there was a fallen tree with the rootwad exposed, we noticed how shallow the roots were considering the size of the tree they held pointing skyward and Dan explained that the roots support each other a bit, like a network. 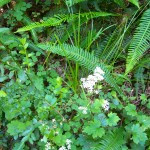 Large trees often grow on flats along the rivers and streams where floodwaters from the past have deposited fertile soil and continue to do so during high water winters.
This is probably a good place to mention that the coast redwoods can get 150 inches of rain and more per year. And that the Smith River can go from 500 cubic feet per second (cfs) to 70,000 cfs and back down to 5,000 cfs in a day or two. It can rise quickly and fall quickly. Some of the flow is from melting snow in the mountains but much is from rainfall. 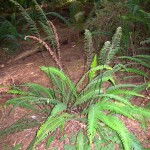 There isn’t much birdsong in a redwood forest but I did hear the reedy rasp of a varied thrush and someone earlier had heard a Swainson’s thrush. In places where a little more sun filters through or in riparian areas wrens may provide some music. 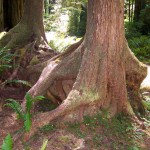 Dan pointed out Cascara in an open spot; huckleberries (with no berries) in a sunny opening and on top of stumps; wood sorrel (oxalis) with its purple underside carpeting the forest 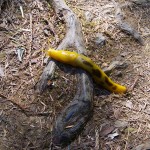 floor in some places, and moss. He talked about how the thick bark acts as protection against fire. At one point he demonstrated the differences in the foliage from the top and the bottom of the trees (This was new to me or, if I had known, I’d forgotten). The topmost needles are clumped together more like cedar or cypress, while those lower down are spread out and flat, more like a yew tree. This has to do with the need to absorb light in the shadows and protect from desiccation up in the open. We also observed reproduction from burls and root sprouts. 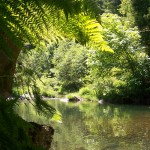 As lunch time approached we took a turn onto the Nickerson Ranch Trail which wound through some rather dense shrubbery. We emerged above Mill Creek where maple trees and alders cast their shade along a lovely section of the stream and there was a big, deep pool. We went down a rather steep embankment to a gravel bar. I scrambled up a huge boulder at the end of the pool and that remained my perch. A large, silvered log lay across the front of the rock, probably washed there during high water. I could see our group scattering 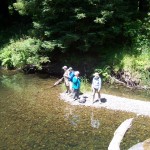 out below me, awed by the scene and ready to get their lunches out. Two jumped into the water (they said it was cold!) and swam about. What a beautiful place to picnic! There was some exploration of water “critters”. Hellgrammites had made tubes of bits of bark in one area and others had used sand. A very small newt was found along the edge of the gravel and we found a couple of crawfish legs.

We didn’t see any sign of Nickerson’s Ranch but when I got home I looked this up and found that it was not a ranch at all but a gold mining claim. Hiram Rice, 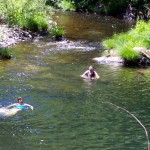 in the 1890s, did drift mining and sluicing on Mill Creek. “ Cornelius G. Nickerson, who was 15 years younger than Rice, likewise prospected on Mill Creek. His “ranch” was located about a mile south of Rice’s house. Coming to Del Norte County in 1867, Nickerson spent his years on Mill Creek as a pocket miner, searching for gold which had been 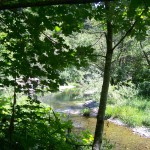 deposited after spring freshets. He also raised a garden and kept a small orchard. For most of his life Nickerson was a bachelor, but several years before he passed on he married the widow Jeater. In 1910 he sold out and left Mill Creek.” (this information is from a park service website) https://www.gov/parkhistory/online-books/redw/history11b.htm

Some of us wanted to return to camp and others to walk a little further, going up the Boy Scout Trail, so we divided the group. I went on up the trail and we hiked about ¾ mile before returning to our cars. It was good to get a little uphill time. 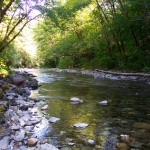 Back at camp I made my way, with towel in hand, down to Hurdygurdy Creek. It was a bit of a scramble down a small rocky path, ducking under and around bushes but so nice and cool when you got there. The creek was much larger than I thought it would be with a good pool area that had a fairly strong current. Someone else was there just finishing washing her hair and probably didn’t even see me. I went past her upstream a little. It was so nicely shaded by white-trunked alders and filled with the sound of rushing water. I stripped down, leaving my shoes on so I wouldn’t slip on the rocks, and got all the dust rinsed off, including from my hair. So refreshing! As I made my way back up the hill another woman was coming down.

Back at camp there was letter writing to a Congressman, happy hour, dinner and then a talk by Phil B. on salmon and a great overview of what lies ahead for spotted owls, murrelets and martens by Kimberly B.

The next morning after breakfast, we broke camp and went our separate ways. Another larger group, would arrive in a few days.