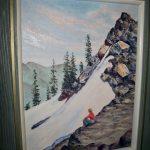 Painting by Alice Jones–Looking into N. Fork of the Trinity River from near Pony Mt.

It would be a lot easier to complete these trips into the past if there hadn’t been so much going on! At least I’m now to the place in this journal where the ink is dark blue instead of pale green and the writing much easier to read.

I continued to get phone calls asking me to substitute, mostly at the high school. One evening Bob took care of children while I went over to the Civil Defense Building (CD Hall we called it, now the Veterans’ Memorial Hall) to hear Max Rafferty speak. He was the California Superintendent of Public Instruction.

One day, when I was taking care of Karen Austen while her parents were taking a church group someplace for the day, I took Karen and the children and we went down to the opening day of the new museum. Uncle Ed was the first person to sign the guest book, Karen the 2nd and I was third. Everything looked good but Florence said there was still a lot of work to be done before the dedication ceremony.

Vigil Delapp came to the house one afternoon to work with Bob on plans for the addition to the house. He thought his part would cost about $1500.

Bob continued to work on the burglar alarm at the museum, often getting home quite late. When talking briefly to Pat Hamilton, who edited the historical society publications, she said she was very impressed by how meticulous he was in keeping to historical accuracy while also making it interesting—said it was an unusual accomplishment. He was also meeting with people about the high schools, trying to find a way to get more funding.

On one of our trips out to the ranch we stopped to see the Waldens and their new baby girl. The older girls took Rebecca to see the rabbits, chicks, ducks and chickens. They gave us some tomato and cabbage plants. They’d been given an old crank Victrola and played it for us—the first time I’d seen or heard one.

“Going to Marlene’s (Towne’s)is such a treat for Rebecca—she’s so much fun to watch really—dreamily licking her ice cream cone, watching everyone who comes in, ice cream dripping down her chin. She and I have really been clashing a lot lately. I know I get after her too much but my patience just gets worn down—She is so good with Jeffrey though and I know sometimes she doesn’t really want to be nice to him.”

At the ranch I tried to spend more time with her. She was having a hard time adjusting to being out there without all the activity of Weaverville. And when Jeff was fussy with teething or a cold that meant I had to give him more attention than normal. My sleep was often interrupted by little people and that didn’t help either.

May 12th we moved a lot of things out to the ranch for the summer, including the washing machine but this meant a couple of trips to the laundromat to do diapers before we actually moved. After the move we had a spell of rainy weather and all of us had colds. I could wash diapers but couldn’t get them dry. I’d dry a few in the house and Bob took the rest to put in our dryer in town.

Often when they were napping I’d try to get something done like scrub the floor. I painted the shelves of a corner cupboard, one shelf one day, another the following day.

Bob went to Mt. Meadow Ranch to work on their mobile phone and didn’t get home until 10:50 p.m.

In late May we took a backpack trip, leaving the children with their grandparents the night before we left. It seemed strange to be in the house without them and I found myself going to their room to check on them.

“The next morning Alice and Horace Jones picked us up and we drove to Prairie Creek where we transferred to our Jeep pickup. Horace and Tammie (their dog) got in the back and we drove up Big French Creek. We ended up on a Jeep road that went on and on—went through a cutover area where there were many elderberry bushes and gooseberries in bloom in the woods—also trilliums. We stopped beyond Panther Camp and began walking because the road looked so bad. From there on it was quite good except for two steep hills that we might not have made.

Near Ladder Camp there was much black, shiny rock and further along, yellow and green. We at lunch at Ladder Camp. I was starved after our early breakfast. Ladder Camp is ¼ mile off the jeep road– two small springs, beneath white pines. Beyond that the Jeep road ended at the Wilderness area boundary and the trail began. The road had been very steep but the trail was more gradual. Many boschniakia in the trail, western serviceberry blooming alongside. 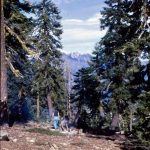 Alice and Horace at the campsite

We were going into the Thurston Peaks area now. We began to cross small patches of snow on the north -facing slope. There was a beautiful waterfall coming down through large gray rocks from a cirque-type area on the Thurston Peaks slope. It fell about 30-40 feet below the trail and tumbled from above. As we climbed into the treeless area there were small fritillaries in the path. When we got to the ridge above Pony Mt. Meadows we found a large snowfield covering the switchbacks leading down the other side. So we had to edge our way down through loose shale and follow Bob and Horace’s footsteps across the snow patches. Alice and I were quite nervous about it—very steep. 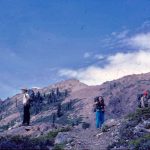 Our camp was beneath tall red fir trees, 2-3 feet in diameter. There was a snow patch above us and one right across from camp where we got water from its melting. We looked out toward part of Thurston Peaks and across the Whites Creek drainage to Wedding Cake and other peaks, still splotched with snow.

After dinner Bob and Alice and I hiked up to Pony Mountain and looked out toward Cabin Peak, etc. We could just see the tip of Mt. Shasta poking up through some clouds and many disk-shaped clouds. Bob climbed on up to the top but we went back to camp. I found what looked like a bear wallow—complete with indentations from footprints leaving it and beside it a white pine that must have been five feet in diameter. 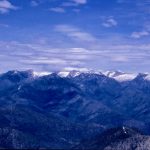 It was very cold and I didn’t sleep much even after I got warm. In the morning we really hurried getting dressed and a fire started because it was so cloudy. Horace just got the fire started when a cold rain began to fall. Bob threw a ground cloth over the cord he’d put up Saturday night, just in case, and it made a small tent. Alice and Horace quickly got their things packed. We cooked breakfast—cereal, scrambled eggs and ham, juice, milk and coffee or hot chocolate—ate, cleaned and packed. Bob cut one of our ground cloths into four make-shift ponchos and we left. Going up that steep slope was much easier than going down had been, although still tricky. The snow had firmed up and we had to be careful.

We made pretty good time going out. Left camp at 8 :00 and were at Stove Camp (wonder whether I meant Ladder Camp?) at 11:30, seven miles later. We ate lunch there. We put some rocks in the back of the truck to help us up the hills and Alice walked ahead to clear part of a snow patch for easier exit (of rocks I’m thinking). We left with the truck at 1:00 and were at Prairie Creek about 3:30. They went on into town and we went up to the ranch to pick up a few things before going into Weaverville. 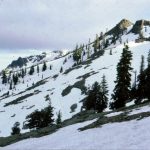 June 5th—at the ranch, raining. Bob called me from town to tell me that Senator Robert Kennedy had been shot in Los Angeles the night before, had undergone brain surgery and was in critical condition. “What a shock!–how can people think that they can just go up and shoot anyone they may dislike or disagree with? What kind of government can there be when people insist on taking the law into their own hands; when it’s not safe for a person to run for office? If this continues, the only way to control it will be a police state and that’s a very unpleasant alternative.”

I used to sing around the house, just as my mother used to. She was raised in Florida and sometimes sang the old spirituals—Swing Low Sweet Chariot and others. I added in folk songs as well. On June 8th—“We listened to Kennedy’s funeral this evening. When they sang Battle Hymn of the Republic, Rebecca sang right along, “Glowy, glowy, hawowuia” in all her innocence. I think Robert Kennedy would have liked that. “