During this time Bob was working a lot during the evenings on trying to get more funding for the high school from the Forest Reserve funding. This would mean less for the elementary school but apparently the high school had been underfunded for some time.

Prepared for Rebecca’s 3rd birthday. She was so excited. We were in town. The morning of her birthday she raced for the wrapped packages, totally not seeing the new trike (used) that we hadn’t even wrapped! Gilda Sanders got her a soft doll that she named Linda. My parents gave her little wooden people candleholders, and we got her a couple of books.

Her cake was devils food with a light pink frosting and deep pink swirls, along with confetti colored spots. It was a butterfly cake with licorice antennae and a red licorice tongue. Suzy and Scotty Fields came and Jennifer Hooper. Florence arrived in time to have cake and ice cream. After the last child left Rebecca collapsed in tears and I read to her and put her to bed…she slept about three hours. 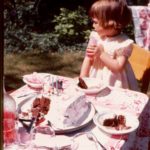 It seems to have been a chilly June. On the 12th the temperature at the ranch got down to 36. We took a walk up to the flat and then cut across the creek and up through the yellow flowers. Rebecca kept asking about poison oak and seemed to be able to narrow it down to one of three—oak, poison oak and raspberry. On the way back we found half of a robin’s egg. They are so fragile. Rebecca tried to keep it from blowing out of her hand and crunched it. Even a large piece that I brought the rest of they didn’t survive very well. We came through the orchard and again saw the young flicker with its head poking out of the hole in the first apple tree. I wondered whether it was always the same adventuresome bird. We could hear the others knocking on the wood inside.

A few days later, Paul Gonzales, the USFS patrolman for that area, stopped by. Rebecca and I had just finished stirring up an applesauce cake. He had a cup of coffee, staying about an hour, and left some Smokey the Bear things for Rebecca. Jeff was napping.

On another day we headed for Mt. Meadow Ranch. We stopped in Minersville so Bob could walk up a hill a way to look for a microwave site. We waited under some oak trees with orange juice and cookies. Then we went to Trinity Center to see Uncle Ed and toured his museum. “it has some very nice things and some junk.” One thing we’d not seen before was snowshoes for horses. We took our lunches with us to Uncle Stanford’s and ate with Gertrude and him, then went on to Mt. Meadow Ranch. They had a mobile phone and Bob worked on the antenna. Rebecca got to see chickens, horses and cows. They were shoeing the horses. She watched calves nursing and the cows being milked. We had a delicious dinner. “After dinner some of the summer help played guitars and sang. We sat up with them till about 10:00. Bob played one of the girl’s banjos and sang too. It’s nice to know college age youngsters haven’t changed much since we were that age but it made us feel a lot older too—sigh.” 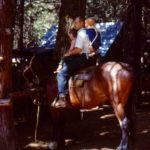 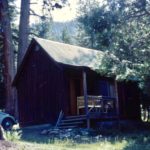 The next day we rode horseback a short distance. After lunch we drove to Boulder Creek and visited with Angenett and Peter and family for an hour. They had a campsite near Alice’s cabin. A couple of days later we all got sick, starting with Jeff, and wondered whether we had food poisoning. He had a temperature and was so ill that we drove to Big Bar to call our doctor on the pay phone because our phone wasn’t working. It was nighttime and he wasn’t on call yet but an hour later we called from a friend’s house. He wanted to see Jeff so we drove into town. Dr. Breeden checked him and then called Frank Hicks to have him open the pharmacy so we could get medication. We stayed in town overnight and then we got sick too. That day Rebecca fell getting out of the car and landed on her face—swollen lip, bloody nose and screaming. Got her cleaned up and fed her jello and crackers. At the post office Vincent Ryan backed into the V.W. and dented the right fender and hubcap. After dinner, going down Oregon Mt. toward Junction City Rebecca got sick. It was after ten that night at the ranch by the time I got everything washed and finished the dishes we’d left when Jeff had gotten so ill. What a day!

A few days later, in town, after putting screaming children down for naps, I went downtown and bought a wheelbarrow, had coffee. Got home as children were waking up. Bob was coping but looked relieved when I when I walked in. We spent a couple of hours on getting the shingles off the end of the house for the anticipated addition, Bob removing the shingles and me hammering out the nails and stacking the good shingles in the woodshed. The next day we went to the museum for the dedication ceremony, leaving Rebecca at Austen’s. It was really hot. Afterwards we went to the barbecue after getting Rebecca. Mildred Hurd and children were there as were Pete Hurd’s parents from Dunsmuir.

Over the next few days I finished painting the floors at the ranch, usually during naps. I taught Rebecca how to answer the phone and put a captain’s chair below it so she could climb up to reach it.

One day, on the way back from Big Bar, I stopped to pick some wild raspberries for Rebecca. “Above Walden’s in the woods, I saw a quail on the road. Slowed down for a closer look and saw a little one so we stopped. I took Rebecca and we walked closer, watching and listening. The mother kept calling, as the flock had scattered and tiny little fluffs of feathers, that looked just like sun-dappled brown leaves until they moved, peeped in reply. She crossed the road and went up the bank and some of the leaves followed her. They were only about two inches high. What a treat!” 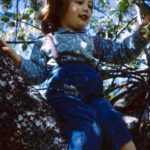 After we got back I drove up to the bathtub settling tank and cleared that while Rebecca “read” nearby and then fussed, and Jeffrey screamed in the car. I backed up a place that was too steep, lifting one wheel off the road. Scared myself a little. Made Rebecca get out while I rectified the situation.

“After the children went down for naps I did a laundry and pruned yards of grape vine from around the little pear tree. Turned the water on the garden and discovered a goldfinch nest almost above the faucet, about six feet above my head. The young looked nearly grown. A few minutes later I found a robin nest in the maple behind the house.

The wind blew extremely hard this afternoon. Brown leaves of last fall from maples in the gulch were whirling hundreds of feet up into the air, looking like pale gold butterflies—a bit of autumn in summer. My life has moments like that occasionally. Bob brought home pipe for fence posts and sand and gravel.”