When I last wrote about life at the “ranch” we had just returned from a 7-day horse packing trip into the New River area. After picking up the children we spent the night at the house in town and the next day headed for the ranch, stopping to see Florence and Leonard briefly on the way. Florence was washing and drying horse blankets. Took Rebecca to ride Topsy and Daphne for a few minutes before we left. She seemed very nervous—I think our absence was hard on her. 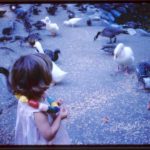 We went out to the ranch where I did several batches of laundry. We picked green beans and squash from the garden and apples from the orchard to take with us the next day as we headed for Nehalem, Oregon to see my parents. I left most of the children’s things packed as Barbara had washed them all. On our way to Oregon we ate dinner in Yreka and stayed overnight in Ashland. We went to Lithia Park to feed ducks and geese before going to the motel and stopped by there the next morning as well.

My parent’s house in Nehalem was yellow and two-storied. It looked old and had peeling paint but then coastal weather is hard on the outside of a house. Inside it was quite nice. They owned six lots up on a ridge with a view of the ocean and a river in the distance and a good view of Neahkahnie Mountains, steep peaks along the ocean. Their yard once had masses of blackberries but they’d done a big clearance job. There were lots of elderberries, maples, ferns and a shore pine, and spruce as well as some small holly trees. The kitchen was long and narrow but quite pleasant with doors to the garage, a half bath and the cellar. The living room had large windows in one corner and a fireplace. Upstairs were three bedrooms and a bathroom. They used one of the bedrooms as a utility room. The first day that we went to the beach was cool and foggy but we enjoyed it–Rebecca picked up everything in sight and brought it home, sand and all. 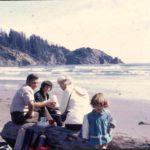 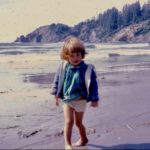 My mother didn’t pass her driver’s test when they moved there and they seemed kind of isolated but happy enough. The next day, at another park, we walked where there were several shallow caves and a waterfall. Later we ate lunch on the sand where both children ended up with sand in all their food but didn’t seem to mind. The third day I came down with the children’s cold. While the others took our car to get it lubed my mother and I went down into the basement, brought up some scraps of wood and built a fire. That Saturday we left. I voiced concern in my notes for living so far from them, not being able to check on them now and then. 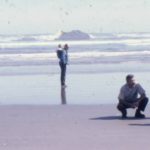 We drove on Highway 22 and near Sisters Rebecca saw her first rainbow. It was a brilliant one with a more faded second one above it. We passed a lot of ranches that made us want to buy them. After eating dinner in Crescent we drove on to Chemult where we spent the night. It was noisy with lots of trucks and a train.

Sunday we drove through Crater Lake—cloudy, cold and some rain. There was snow and ice on the road. We stopped at park headquarters for a few minutes where Bob took pictures of some buildings and the microwave set-up while Rebecca and I ran up and down the road. We ate lunch in Jacksonville and visited the museum. They turned their old courthouse into a museum and it had lots of room. Rebecca didn’t seem to get bored—we kept moving and also there were lots of dolls and toys displayed. We ran though the Siskiyou County Museum and got to Weaverville about 9:30.

The next morning Bob got called in to work on the budget. I took clothes and children over to Florence & Leonard’s and washed a couple of batches of laundry. Bought groceries, mowed the lawn. We stayed overnight in town. Tuesday I took Rebecca to the library, did some shopping and went to the ranch where I unpacked, comforted children a lot and picked vegetables. The days continued pretty much in this fashion with berry picking—elderberries– making jelly, chopping wood. Bob was spending some work days tromping around on Weaver Bally looking for a good micro-wave site. It was getting colder at night and I began covering the tomato plants. Both chimneys had screens clogged with creosote that Bob cleaned off. In the warm, Indian Summer afternoons I picked and wrapped apples for when we would move back into town. Weaverville had three heavy frosts but we were still ok.

At the town house Bob dug up some azalea and rhododendron bushes by the back door where he wanted to put a porch. The Ohdes gave us a little kitten, gray with white bib and feet, that Rebecca named Tigger.

October 1st: “Jeffrey has been climbing onto Rebecca’s rocking chair the last few days. He gets up and down for 20 minutes at a time, sometimes sitting and rocking for a minute. It’s quite a struggle and sometimes he gets one leg caught and needs help. It drives Rebecca nuts because he ‘s having so much fun with her chair. She’ll sit in it even though she doesn’t really want to, just to keep him out. She is still quite nervous. Haven’t been able to calm her down since our pack trip.”

One day I tried to find the trail that goes around the point to Big French Creek. I found it but all the approaches seemed to be narrow deer trails that Rebecca couldn’t negotiate. We went up on our ridge and sat and talked, looking across at the house through the red poison oak leaves. The mountain on the other side of Little French Creek was beautiful that morning—“deep blue with just the tops of some of the taller firs catching the sunlight. Yellow leaves of maples on this side crisp against the dark. ” That day I picked some apples and made two quarts of applesauce, which I froze, and one pint of apple juice. Did some rockwork. Picked lettuce for salad and made sauce from some of our tomatoes. Rebecca took a new book to bed with her that night.

A few days later we were in Weaverville. Bob flew to Mad River and got back late. I took the truck over to the sand and gravel place and picked up a ton of gravel, brought it back to the house and unloaded it. Took the truck back and got the car and bought groceries. After lunch I got another ton of sand and redwood board for a mudsill. Out at the ranch that weekend Bob worked on the generator and I did laundry. We both did rockwork in the afternoon and he put in a mudsill. I picked the rest of the tomatoes. I’d gotten up at 3 a.m. the night before to build a fire in the big stove.

A couple of days later Bob stayed in town overnight to get an early start on going to Mad River. He was really late getting back and I began to worry about him and made a few phone calls. No one thought he’d be staying in Mad River. Bob got home about 11:30 p.m. He had a fawn in the truck. It was this year’s fawn but had lost its spots. It had a large gash in its left rear leg, very deep. He took the 22 and went down the road with poor animal but by the time he got to where he was going to stop it had already died. He had found it at the foot of the clay slide on this side of our creek.

Friends from the Bay Area came and stayed overnight (Ted and Betsy Lewis and children). Bob, Ted and Ned got in some fishing at the river and then the next day in Canyon Creek before they had to head back home. It was cold with some snow in the rain. Made my first green tomato pie. It was good—kind of like mincemeat. On nice days I’d take the children up into the meadow beyond the orchard because the house was mostly in the shade in the mornings now. Afternoons were pleasant out on the lawn.

Bob went to Mad River on a Monday and stayed overnight. That day, after lunch, the children and I played and read out on the lawn. Jeffrey would climb up on the porch with much effort, walk around for a while and then get off the porch by falling off. Tuesday evening Bob called to say he had to stay in Mad River one more night. I put the last of the gas in the generator. 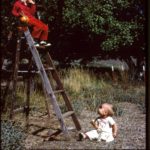 The next day the children and I drove to Big Bar and had coffee and snacks at Towne’s restaurant. Went across the street to get a few groceries and gas for the generator. Stopped at Bill Jackson’s old place at Prairie Creek and picked some wild grapes on the way home. Also picked up a few rocks along the road to take home for the foundation.

“It was really exciting to have Bob home again after three days and two nights with just the three of us. Rebecca kept up a constant stream of chatter with him until I put her to bed.”

On one of our mid-October walks we found mushrooms at the edge of the woods, pushing up through the pine needles. I rolled a little log over and we found a salamander, about three inches long with yellow legs and tip of the tail, and large bulging eyes. After Rebecca held it we put it back and replaced the log. We looked under many other logs but found no more salamanders. Under one small, rotting log we found carpenter ants and their eggs and a gray scorpion. We came home along the opposite side of the creek and crossed after picking a bunch of wild grapes for Rebecca to nibble on. Jeff was asleep in the pack by then. We found the house full of smoke. The screen on the chimney of the heating stove was plugged again.