Friday–Today we started out at about 10:00 for Thompson Peak. Florence, Leonard and Vernon took Topsy, Ginger, and Chollo down near the Moliter Mine (about six miles) to go fishing. 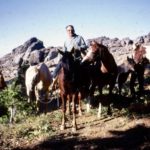 Bob and I hiked up the meadow and began to follow ducks and flags zigzagging up through a rockslide. About half an hour later we could look down and see three backpackers coming up towards the falls below us. It was fairly cool today with high, thin clouds and haze in the morning.

We arrived at the lake about 11:30. It’s really pretty—irregular shoreline with Thompson Peak behind and the snowfield glacier right beneath it. Talus slopes to the right and left of the snowfield. Smooth, polished rock around the edges. We immediately set about cleaning up a little before continuing. The water was very cold but refreshing. One interesting thing about the lake was the millions of tiny, red shrimp (I think) in the shallows. Whether they were further out or not I don’t know. There were some on us after ducking into the water and they were in our cup of water.

After a large drink of water we began winding up the talus slides. About half way up the ridge we looked back and saw the backpackers at the lake. Later we found out that they had come a much harder way, closer to the falls. We got to the ridge after crossing several damp places with monkey flowers, gentians and penstemons blooming and came to a place that was flat and gravelly. We picked our way up the ridge skirting large boulders, mountain hemlocks and pines, foxtail maybe? We stayed too high, really, going up the edge and had to do some boulder scrambling. Coming back we stayed low.

We went up and down a couple of chimneys coming and going. Finally got to the top. It was hazy but we could see Mt. Shasta to the north and could look down on Grizzly Lake and the glacier to the east (?). Big crevasses in the glacier. Grizzly Lake is shaped somewhat like a big foot. To the south we could look down into Canyon Creek Lakes. Took some pictures and headed down. Talked a few minutes with the three boys at the lake. They were from San Jose and had come in from Cecilville in Siskiyou County. They wanted to know what kinds of jobs were available for a college graduate in Weaverville. They were hoping to climb the face of Thompson Peak.

At around 6:00 we were back at camp. The others hadn’t arrived yet so I started a fire and Bob turned the dogs and the horses loose. The dogs had been left at camp to allow their sore feet to heal. About then the other three came back. Freckles (one of the dogs) was so happy to see Florence that he went over and sat up beside her horse. Fish for dinner that night and brook trout that Leonard had caught for breakfast the next morning.

This may be Potato Mt. from earlier in the trip 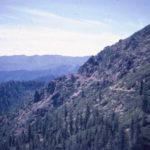 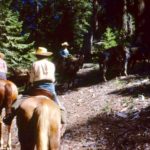 Saturday—Florence and I started walking with Topsy this morning. She said that, after having ridden Topsy yesterday, there was no way to make the horse go faster. Made me feel a lot better about riding her because I was beginning to feel guilty about not keeping up! We walked about three miles and got through the worst of the rocks and steepness. We met four backpackers on the way. The rest of our group caught up with us and soon we were all riding again. We ran into some yellow jackets and Topsy stumbled and nearly fell while running from them.

Adjusting a pack–kind of dark photo 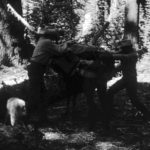 We followed a ditch grade for a long time and looking across the creek could see the piles of rocks left from mining (like the dredging rocks) but these had been hand-placed by the Chinese. The trail today was either level or downhill a good part of the way and Topsy trotted to keep up. So I spent most of the day bouncing.

We stopped for lunch at Mr. Jorstad’s place. He has a log cabin along the trail, which he and a friend (who was with him today) built 40 years ago. The porch and inside floor are large square blocks of wood, with dirt between. There is a loft for sleeping. Outside he has a camp for summer staying with a wooden cupboard, stove, tent, wooden bed (which he made), wooden (pole) swing, swinging couches and a table. Water is piped across the N. Fork to the edge of the camp. A donkey is in the corral. We shared our orange juice and cookies with him and his friend and they talked about the mineral survey being done in the area and his mining, etc. He showed us a small bottle of gold. He’s a small man, thin, balding, nice smile. Quiet way of talking and speaks well. 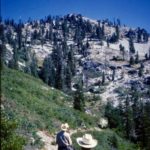 We went on, Florence and I walking across a couple of bad stretches above the creek and got to Hobo Gulch about 5:15. The boys and trucks were there and, after the horses and saddles were loaded, we drove about 15 miles downhill to reach the highway. Got to Weaverville around 8:00, unloaded horses and went up to Ryan’s to eat. We rode 22 miles on the horses today. I rode Milkshake the last mile and discovered that riding needn’t be all bouncy. He has a rough walk but a very smooth pace.

We picked up the children at Austin’s around 11:00. They both seemed glad to see us even through their sleepiness. We enjoyed looking at them and listening to Rebecca talk—after a week it was like seeing them freshly and newly.