October continued in much the same way as had September but with perhaps a greater sense of urgency since we didn’t know exactly when we’d be moving from the ranch back into town. Bob worked on his second article for the Trinity Historical Society publication. I continued to harvest a few things from the garden—green beans, cabbage. And we had many apples, which we’d give away to people who came to visit or take into town.

Florence gave Rebecca’s kitten (Tigger) a wicker basket house and made a little soft, brightly colored bed for inside. 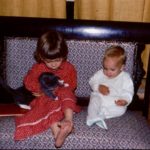 October
*******************************************************************************
On October 21st we went to a meeting at the CD Hall where Hazel Wilburn and Al Wilkins as well as Dick Wilson and Joe Paul (from Trout Unlimited) spoke opposing the Dos Rios Dam. There were about 135 people there. The general mood was No Dams for Trinity County. Those opposing didn’t speak up. Many questions were asked from the floor. There were several sports writers there. “Trinity County will form a similar group and there will be a steering committee of members from both sides.” (‘In 1967, the US Army Corps of Engineers unveiled a proposal to construct the largest dam and reservoir project in California’s history: the so-called “Dos Rios Dam” on the Middle Fork of the Eel. In addition to being 730-feet-high, the dam would have flooded a 40,000-acre area for its reservoir, equal in size to the Shasta and Oroville reservoirs combined. This proposal was brought about due to flooding in 1964-65 and to Los Angeles’ need for more water. Among other things.

Richard Wilson was a wealthy Republican who owned a ranch in Round Valley. The flooding of Round Valley would also have meant that the Native American tribe there would have had to be relocated. The tribe teamed up with environmentalists and Wilson to fight the proposal. Eventually it was vetoed by Ronald Reagan). For still another possible pending water grab see https://www.pressdemocrat.com/news/2302448-181/eel-river-has-long-been–?sba=AAS)
****************************************************************************
Back at the ranch, mornings were usually clear at six but by seven it was foggy. “As the fog clears and the sun rises the colors of the foliage are brilliant. The English walnut is bright yellow now and the peach and pear trees various shades of orange . The Virginia creeper on the porch is a deep red.” 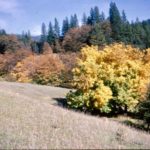 One day Rebecca and I saw an owl in the maple tree behind the house. I thought it was probably a sawwhet owl, about robin size with white spots on the wings. It was about 15 feet above the ground and was hard to see because it looked so much like the leaves and branches. It stayed for about 15 minutes and then flew when I went under the tree to try to take a picture.

There was always rockwork to do in spare moments, or painting window trim, or chopping some wood, or picking apples. Florence brought Eleanor Asplin out one afternoon when she came to take some fall color photos. Leonard, Rupert Asplin and Vernon Ryan had gone hunting. Some weekends Bob would be busy with phone calls about various phone problems.

One evening when Bob brought home a big stack of mail from town there was a copy of a Ranger Rick Magazine that had a short article I’d written. I was pleased, even though it looked a lot different than what I’d originally written.

After naps on October 29th, Rebecca and I worked on turning a pumpkin into a jack-o-lantern. Bob had called earlier saying he had to stay in Garberville that night. “Rebecca was most interested, and helped pull out seeds and fiber and put chunks I set aside in a pan for pie. “

We had the washing machine in the “cellar” space under the porch and if it rained and I was doing laundry, it meant running down the bank to the machine and back up through the wet.

November 1st: “Did 3 batches of laundry, running up and down through the rain. Cut some wood this morning for the heating stove (3 wheelbarrows with Rebecca riding)) and more this afternoon. Dug up all the carrots I could find. Finished hauling and stacking the last load of wood as it began to rain. Cold—temperature stayed around 45 degrees. Made 3 baby food jars of tomato preserves. Cooked venison stew and a tongue. Folded one batch of clothes. Put them away and bathed the children before Bob got home. “

The next day, a Saturday, Bob was busy getting things ready for winter: tractor, generator, lawn mower, etc. We’d had a heavy rainstorm the night before. Coyotes were barking and calling on the hill after lunch. I packed a lot of things in the afternoon. The next day we moved into town. Bob and Rebecca went back out to the ranch with the store truck to get the washing machine. 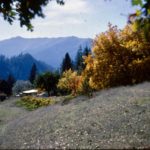 November 6th— Bob and Jim Barrett and a man from Redding rode up Weaver Bally on horseback to do some survey work for the microwave. It was about seven o’clock when they got back and they rode in the dark for about an hour.

Nixon got re-elected. This was back when we were both Republicans. When I moved to Oregon I changed to the Democratic party. “Nixon had 187 vote lead in the electoral college but both he and Humphrey had 43 percent of the popular vote with Nixon barely a few thousand ahead. “

I had to turn down a substituting job in Lewiston because I couldn’t find a sitter.

A few days later we spent an hour or so letting the children ride on Daphne while we took pictures with plans to put one of the photos on our Christmas card. That Sunday we drove to the ranch, stopping on the way to look at the Pattison place where William Wilshire Pattison was buried. Bob had borrowed a polaroid camera from Pat and Dick Hamilton and took some pictures of the headstone. “It’s really pretty—marble with the base covered with moss and the top in four scallops, each with a different print. Above the inscription is a miner’s pick and shovel, on another side a crown, etc. We ate lunch at the ranch and about one o’clock the Goodyears came up with their pickup. I’d started defrosting the refrigerator and was cleaning some but left that to pick apples with them. Finished a little after 3:00 o’clock. Bob stayed in the house most of the time, working on the biography for the article. After the Goodyears—Dorothy, Hal, Elsie, Gail and Jan–had toured the house they left and we left shortly afterward, eating at Big Bar. 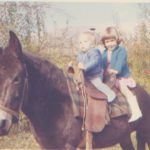 One evening, while Bob was working on a post for the gate at the ranch, working at the high school, I took the children over to Florence and Leonard’s and put the kids to bed. Florence and I stirred up ingredients for mincemeat (including apples from the ranch). I peeled, cored and cut apples while Florence ground the meat and apples.

Bob and Harley Lowden went to Mad River two different days. The kids and I went downtown on November 14th –library and other errands—and it started snowing fine, powder snow on the way back. I gave a ride to a woman and her son who were who were walking up the hill. That afternoon I swept the snow off the plastic, that Bob had put over the porch cement, about every half hour and typed a few more pages of Bob’s article. Rebecca and I made chocolate chip cookies. Doris and I decided to not go to Redding to hear Ansel Adams speak. It was snowing clear down to Redding. (I don’t remember that we were going to hear Ansel Adams speak! Too bad it snowed.)

Florence brought up seven quarts of mincemeat. I took the children outside to try to play in the snow but it was very cold. I filled some glasses with water and showed Rebecca how to tap them with a spoon to make music. She put food color in the water. 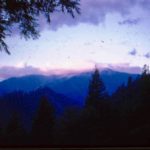 Dick’s VW was stolen from behind the store and a few days later was found in Yreka with a flat tire.

Bob went to Earnest Duncan’s funeral. He said someone sang Red River Valley and Ghost Riders in the Sky. “I’m glad I didn’t go because that would really have shaken me up.” I always think of Earnest with a handful of roses for Marlene Towne at the restaurant or the night he came into our house at Big Flat, barely standing, after hunting for his cows up on Manzanita Ridge in the snow. He got a lot of enjoyment out of life.”